Thankfully, train derailments are few and far between in Cape Girardeau. That was one of my first thoughts when I stumbled across the story of a 1951 train derailment in the Red Star district of the city.

The second was, "Man, I wish we had the negatives for these photographs."

Even when copied from the microfilm, the photos taken that day by G.D. Fronabarger are impressive. What's also impressive is that no one was injured in the accident. 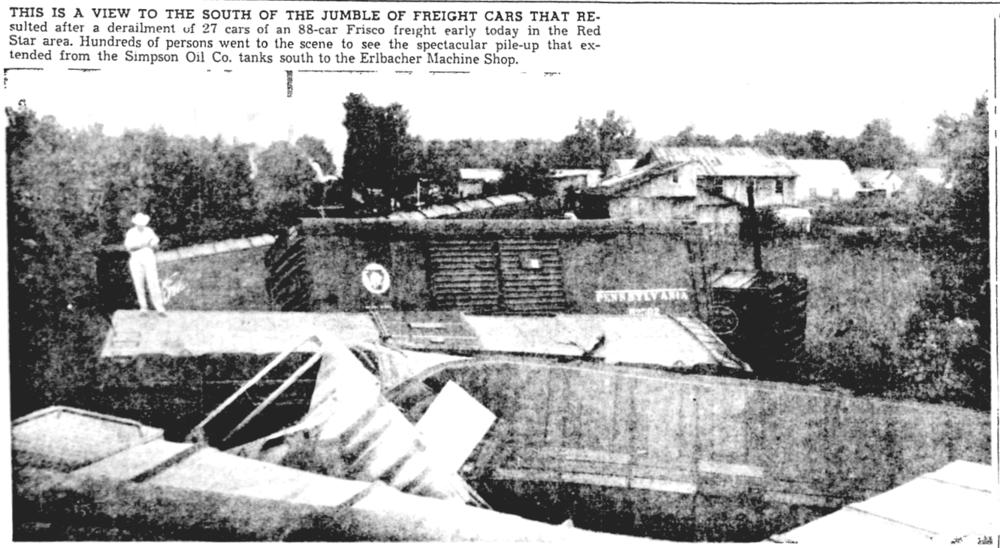 Freight cars were tumbled into a splintered and jumbled mass of metal and wood early today when an overheated journal on a southbound Frisco train separated a wheel from its axle causing a derailment that ripped up 3,000 feet of track adjacent to the Red Star suburb.

In all, 27 cars of the 88-car freight train were dumped helter-skelter along the right of way and piled up in a huge heap in a trestle-spanned ravine. Twenty-six of the cars were loaded. No one was injured.

J.L. Mumma, division superintendent, said the freight was a merchandise train carrying general type cargo. He related it had stopped at McBride (Missouri) for a routine check that included an inspection of every journal box on the 88 cars. No sign of trouble was indicated there.

The wreck occurred shortly after `1 o'clock and blocked both northbound and southbound passenger trains from their regular runs. Mr. Mumma said the southbound train halted at Cape Rock where 119 passengers were transferred to three Greyhound buses. The northbound train stopped at Chaffee (Missouri) and was routed to St. Louis over Cotton Belt tracks.

Frisco trucks were sent to Chaffee to meet the train and transfer first-, second- and third-class mail from the transfer points, but then it was decided to maintain normal delivery.

Passengers from the noon northbound train were transferred by city buses to Cape Rock where they boarded the southbound from St. Louis. The train then returned to St. Louis.

Southbound passengers, mail and express were removed at Cape Rock and brought to the passenger station to meet the waiting train from Memphis. Six Buses were used to accommodate passengers.

"Cape Girardeau railroad personnel have had a lot of experience in handling the transfer of passengers and mail as a result of the recent flood period. Everything went smoothly," Mr. Montgomery said.

An off-duty Frisco yard clerk, T.S. Cannon, was the first person to notify the railroad of the derailment. He heard the wreck from his home, 1444 N. Water St., about 100 yards from where the cars left the tracks.

Mr. Cannon said he reached the scene so quickly that only the fireman and engineer were at the scene. The conductor and brakemen had not yet come forward from the caboose.

A rail wrecker from Chaffee arrived at 8:10 a.m. and another was reported en route from St. Louis so work could be done from both ends of the wreck. Mr. Mumma said there would be approximately 250 men employed in clearing the wreckage.

He estimated that the 27 cars should be moved from the main line by 8 o'clock tonight. A new bridge will have to replace the trestle that was demolished by the stacked cars. "If we're lucky we should have it ready by 1 or 2 o'clock Sunday morning, Mr. Mumma said.

He said actual track damage would come to about $1,600, but said that did not include the cost of a new bridge. A temporary span will be put up until a permanent structure can be3 built, the division superintendent related.

There was all sorts of merchandise from grocery store stock to bathtubs on he train. Two cars contained meat and were beneath the pile of box cars. Mr. Mumma said he hoped to transport perishable meat to Central Packing Co. refrigerators.

The journal involved was on a trailing wheel on the lead truck of the two sets of trucks that support a boxcar. 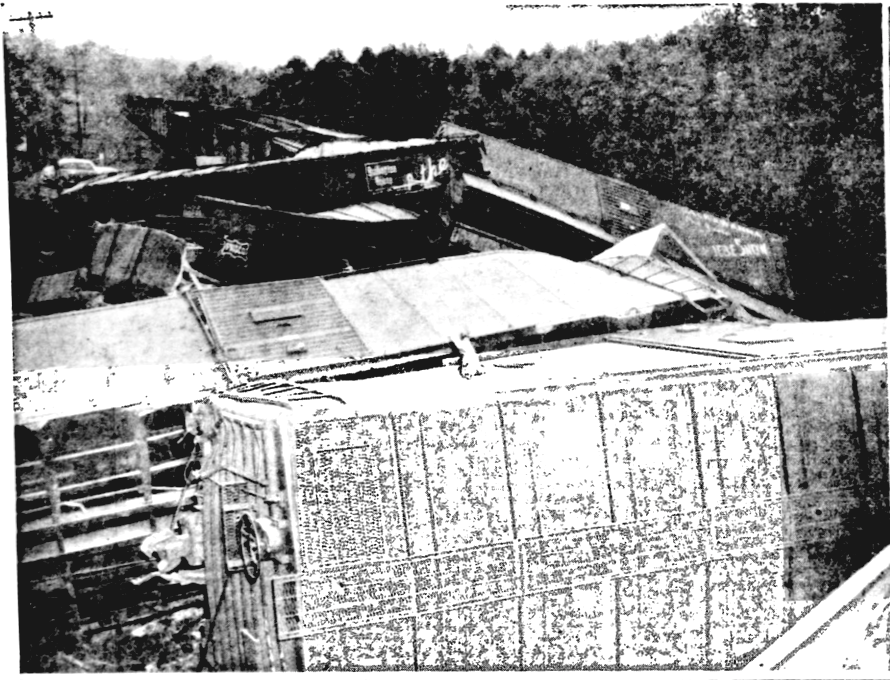 First evidence of this was to be seen about 25 yards north of the Simpson Oil Co. terminal. Inch deep holes were dug in the tie ends. As the condition continued, the journal box ripped into rails with the result that following cars were stacked up in a spectacular pile.

Mr. Mumma said the journal burned out on the 16th car from the engine of the train. It traveled from the point adjacent to the Simpson terminal down to a point opposite the Eddie Erlbacher machine shop at 1300 Water St., a distance estimated at 3,000 feet.

A Carload of Steel.

There the trucks left the freight car and went on the west side of the track. The boxcar turned over on its side to the east of the tracks. Approximately 100 yards separated this car from the next. It was also on its side on the east. There followed a smashed gondola car, then a flat car loaded with steel pipe. Another boxcar, an oil car and then the jumble were in that order.

Mr. Mumma said all railroads are giving careful inspection to their equipment since the recent flood. Many boxcars were under water, he related, and the chance of journal failure has been increased.

Speed of the train as it approached the yard limits in the city was estimated at 35 miles per hour. A survey of the damage showed at least 14 cars piled up in and around the site of the wooden trestle over the ravine.

In one place they were three deep. One car was slammed against the ravine bottom so hard that a side was half buried in the mud. In most instances the cars were piled sideways across the tracks, one driven against another.

Telegraph poles on the east side of the tracks were torn out as several cars toppled them like matchsticks. One utility pole on the west side was struck, severing power to the water plant at Cape Rock. An auxiliary line picked up the load keeping service uninterrupted.

Few persons living in the Red Stare suburb heard the wreck, Missourian reporters discovered. A family living 25 yards from the point where most of the cars tumbled into the ravine heard nothing. 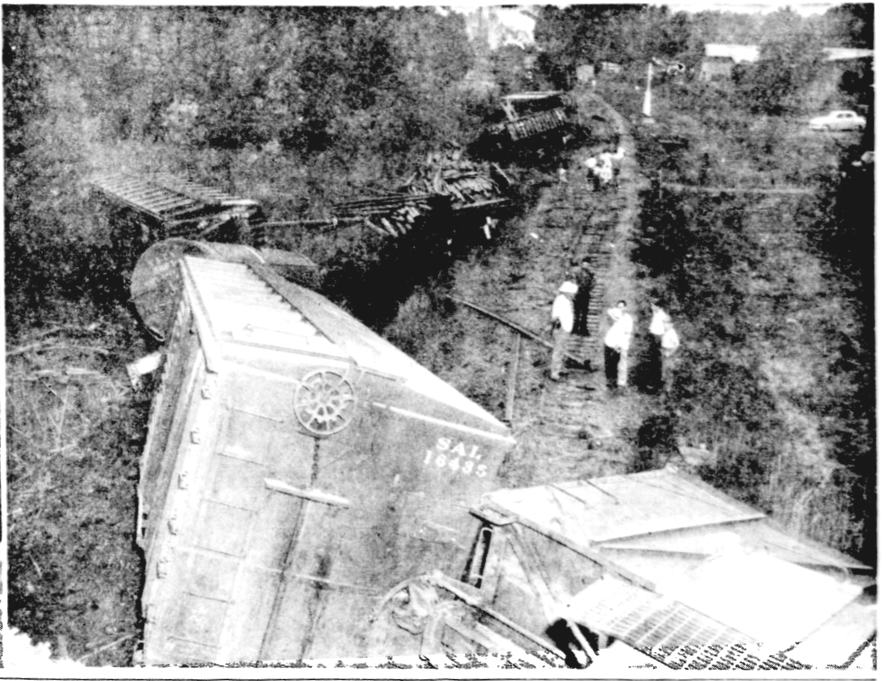 Thought It Was Thunder.

"I woke up when I thought I heard a loud noise, but I went back to sleep thinking it was just thunder," Mrs. Carl Latham, 1418 N. Water St., said.

Her father, T.S. Cannon, who telephoned the news of the wreck to railroad authorities, said he was awake when the crash occurred. He said he realized immediately what had happened and went out on his porch from where he could see the pile-up.

Several hundred persons living in the neighborhood of the crash were at the scene this morning. Many of them questioned by reporters said they didn't hear any loud noises during the early morning.

But Mrs. Betty Nanna, 1340 N. Main St., had a different story. "When I heard the wreck, I thought it was a tornado or a bad collision. I was in the middle of the tornado here two years ag0, But after the first noise of the wreck reached me, I heard the cars dragging along the rails and piling up, and I know then what happened," she said. 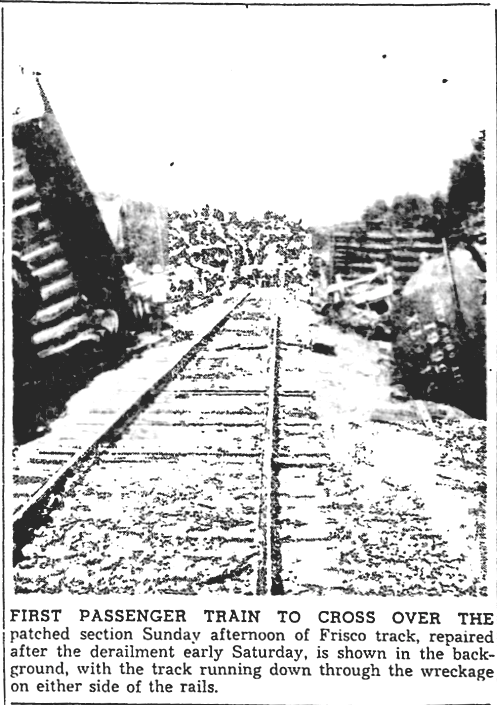 Frisco tracks were cleared of (the) wreckage of Saturday's pile-up of 27 freight cars and train service was restored at 2:30 o'clock Sunday afternoon, but a job of several days duration remains for workers engaged in repairing and re-railing the smashed boxcars.

Trains began to roll both ways over the tracks after big railroad wreckers from St. Louis and Chaffee, Missouri, working from opposite ends of the wreck in Red Star suburb, had put the huge boxcars aside so 3,000 feet of rail could be laid and a new trestle built over a ravine.

Paul Krueger of Chaffee, chief clerk for the division, said it was difficult to tell how long it would take to remove the wrecked cars, but estimated it will be several days. The St. Louis wrecker left and another from Memphis took its place, he said.

Some of the goods in the 26 boxcars that were loaded was sent on to the consignee, but other items were sold as salvage. There was an estimate of $200,000 damage to cars and stock from the wreck.

A number of Frisco officials were here Sunday to view the wreck scene. They included E.P. Olson, assistant general manager, and F.E. Short, assistant chief engineer, both from Springfield, Missouri, in the western division.