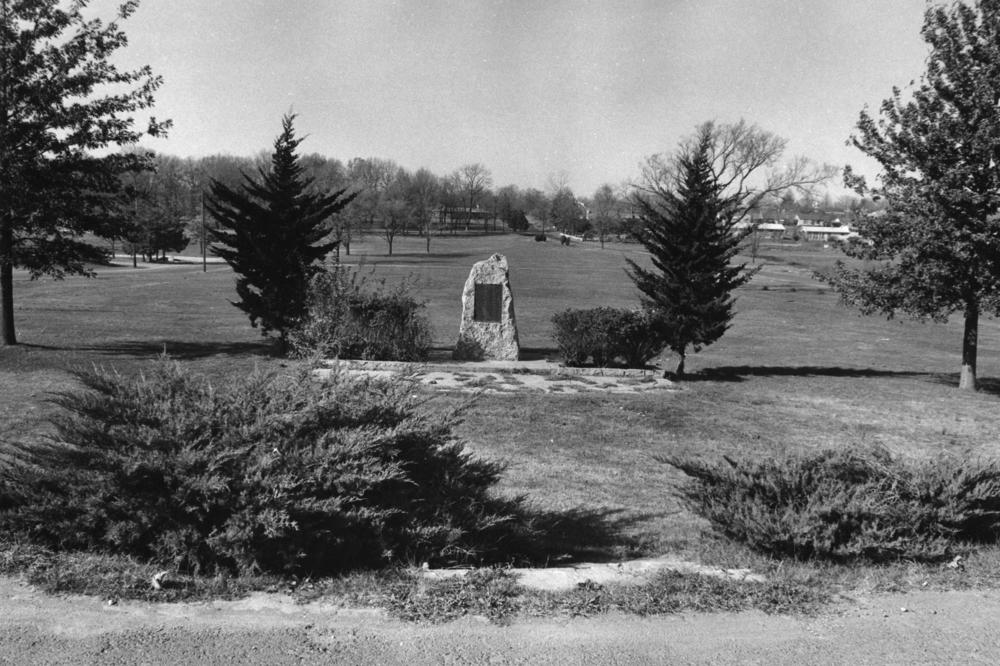 This site at the entrance to Arena Park from U.S. 61 was the Navy's first choice for its new Naval Reserve Training Center in 1964. (Southeast Missourian archive)

The training center had stood at that spot since 1969. Unlike its demise, which only elicited a few objections, the selection of a site for the center created enormous controversy here.

The history of the building began five years before its dedication with the visit to Cape Girardeau of the Navy's surgeon general, Rear. Adm. Edward C. Kenney on Oct. 29, 1964. He was here to speak to members of the Navy League. During his talk about the responsibilities of the medical departments of the Armed Forces, Kenney announced that a Navy survey team from Great Lakes, Illinois, would be in Cape Girardeau the following week to inspect sites for a proposed new naval armory.

In remarks the following day, Lt. Cmdr. James E. Brandon, commanding officer of the Naval Reserve Unit here, said he hoped that a site in Capaha Park might be made available for the $750,000 armory. His wish didn't come true, however, as the survey team focused on two sites in Arena Park, another within the State College farm area, and several privately owned locations, including the North Sprigg-Bertling area.

Working quickly, the Navy notified the city of Cape Girardeau Nov. 11 of its choice, giving the city until Nov. 20 to agree or reject the selection. Adding to the pressure of such a short deadline was the fact that Mayor W.E. Davis refused to disclose the site publicly. According to an article in The Southeast Missourian, however, indications were strong that the Navy wanted a site in Arena Park. The newspaper's response to that suggestion was unqualified opposition.

NOT IN ANY PUBLIC PARK!

Once more -- another in a long series of such moves -- efforts are being made to remove public park property from the use of the people.

Now it is the Navy, and the citizens of Cape Girardeau should stand ready to do battle with its mighty forces if it attempts to take even one small foot of Arena Park or any other property in the city.

It sounds enticing, but is a snare and a delusion, to say that the park could be the site of a three-quarter million dollar building and will bring thus-and-so many dollars into the community.

The facts are, however, that four or five acres taken from a public park become ground irretrievably lost to the people.

There is no measuring of collars and cents against the creation and aesthetic value of a park to a community. As a park it brings untold days and weeks and months and years of pleasure, repetitious pleasure, to the people in numbers which cannot be counted.

Why is it that the government or agencies of the government and those well-meaning but actually misguided persons representing government, always seek first to grab park space for building sites?

Cape Girardeau went through this first a number of years ago with the National Guard and then with the Public Library and with other odd and sundry groups which wanted a bit of space here -- "Oh, not very much. The city would never miss it!" -- and a bit of space there.

It's because it appears free. That's why.

But it isn't free.

Park space is the most dear possession a municipality possesses. A public park is the center of its activity, the heart of the community, the place for relaxation, the open area where the city-bound resident can go among trees and plantings for a renewal of spirit.

How long has Cape Girardeau been crying for more parks? How long?

For years it has been urging and pleading for public parks to serve both the south and north parts of the city. For years this newspaper has been asking that efforts be made to obtain more park property for the expanding city; that the lower part of Arena Park be developed, as just now at long last is being done.

Only a few days ago a Park Advisory Board was established and one of the principal objectives set for it was the acquisition of more park property.

And here, would we slap this program in the face and give away park space (and) then go out and tell the people we need funds to acquire more park property?

Is that reasonable? Would it draw community support or community derision? Certainly their could be no confidence in any request for more park property if we give away a large part of what we have. Nor could such a request be expected to succeed.

We recall that the bulk of the land in Arena Park was obtained through a $55,000 bond issue FOR PARK PURPOSES, not for government buildings. Translate that park land into the value it would now have, even economically, and the price per foot would be astronomical. Would we give this away?

And anyone who is at all observing of the growth of Cape Girardeau know that Arena Park is in the very center of that growth. Are we going to dispose of acreage in a park that is serving the most rapidly growing area of our city? More people and less park space. Is that the answer?

But don't plan to use park space because it appears "free." It would be free only at the expense of the people of Cape Girardeau.

There will be those who say the National Guard has a site obtained from Arena Park. This is true. But that was done over objections. The objections were sufficient to stop the effort to put it at the very entrance to the park, an area used extensively for recreation. And the place it did go was the old city dump, a burning, ragged rabble of a place which was converted to use by the National Guard.

One further point: Why the haste? Why is Nov. 20 a deadline" The government customarily doesn't act in such a great hurry. If appropriations are made for the armory, they will stay. The fiscal year doesn't end until July 1 and there is little chance then they would be withdrawn. The haste infers pressure to get an act performed without proper time for consideration.

We think this is a matter of vital concern for the people of Cape Girardeau. It is their decision to make. They should not be rushed into it. And they should let their elected representatives know exactly how they feel about giving away THEIR property.

Not in any public park!

The next day was another with no answers to a multitude of burning questions about the where and why of the project. With the mayor still refusing to state publicly where the Navy wanted to build, The Missourian quoted an unnamed "good authority" that the survey team had picked out a spot at the main entrance to Arena Park off U.S. 61.

That led to a second editorial, which consisted only of a series of questions that had yet to be answered about the project, beginning and ending with "Why the secrecy?... Why the secrecy? Why?"

Finally, on Nov. 13, Mayor Davis confirmed that the Navy wanted to build at the Arena Park entrance. The city was expected to lease the site to the Navy for 50 years for a minimal amount. The Navy agreed to finance the construction of the armory.

A Missourian article published Nov. 14, described the site: "The tract the Navy wishes to lease would fill the space between Marie Louise Lane and the park road to its south, widening at the rear as the park road curves southward toward the Arena Building. The west line of the property would be even with Rodney Vista Boulevard.

"The property would have a frontage of about 1,000 feet on Marie Louise, eastward from Rodney Vista.

"This would place the front boundary of the tract several hundred feet back from the entrance of the park at Highway 61."

Mayor Davis, in speaking about the choice, noted, "The (city) council will be guided by the wishes of the people." Those wishes were heard immediately. Numerous letters to the editor were filled with pleas to reject the site. At a City Council meeting on Nov. 16, 21 persons appeared in connection with the proposal and several voiced their opposition to the plan. Among those speaking against it was LeRoy Roper, a member of the Cape Girardeau Chamber of Commerce's Industrial Committee and president of the Southeast Missouri Fair Association. The chosen site was used for overflow parking during fair week.

Even several members of the council -- Dewey Hinton, John Hayden and Al Nenninger -- expressed their disapproval. A few days later, Park Commissioner Harry A. Siemers and Mayor Davis did the same.

Rep. Paul C. Jones, acting on a request of The Southeast Missourian, inquired as to the haste with which the Navy was seeking the city's approval. Apparently, his inquiry resulted in the Navy extending its deadline indefinitely.

With that pressure removed, the city fathers began searching for an alternative location "outside a park area." They found one Nov. 28, taking a three-year option on four acres of land north of Arena Park owned by Mrs. Jessie Tow, "within the triangular tract formed by Marie Louise Lane, Highway 61 and Rodney Vista Boulevard." The purchase price was $50,000. It was noted that, regardless of whether the Navy approved that location, the land would be purchased by the city and would become part of Arena Park.

Cape Girardeau architect Fred E. Dormeyer Jr., received the contract to design the 22,000-square-foot Naval Reserve Training Center in May 1965. He completed those plans in December. A newspaper article Dec. 7 noted that the building might be finished late in 1966.

But that optimistic prediction didn't consider the expenses of funding a war in Vietnam. Word was received March 1, 1966, that construction of the center was being held up because of a lack of money, the result of new spending demands brought about by the war.

It wasn't until 1967 that those purse strings loosened. Construction bids were taken in June, with Crites and Sailer Construction Co., of Cape Girardeau receiving the contract. Site work began July 31, and a year later the building was finished. Reservists began using the facility July 28, 1968.

On May 27, 1969, the Naval Reserve Training Center was dedicated. An article in the next day's edition of The Southeast Missourian described the event. 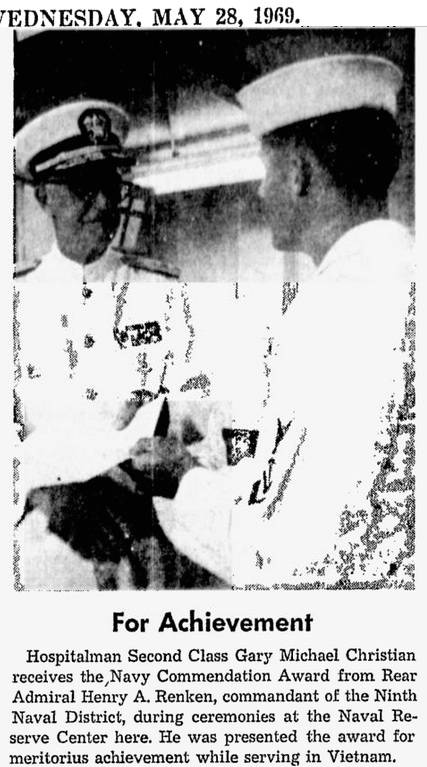 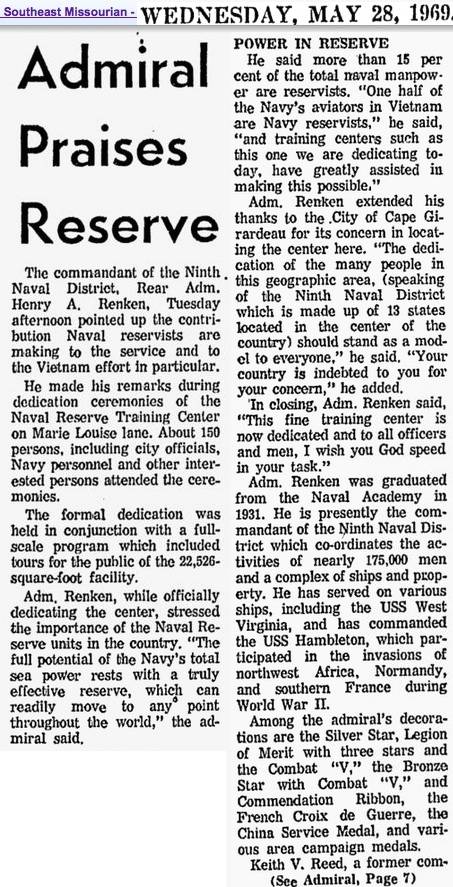 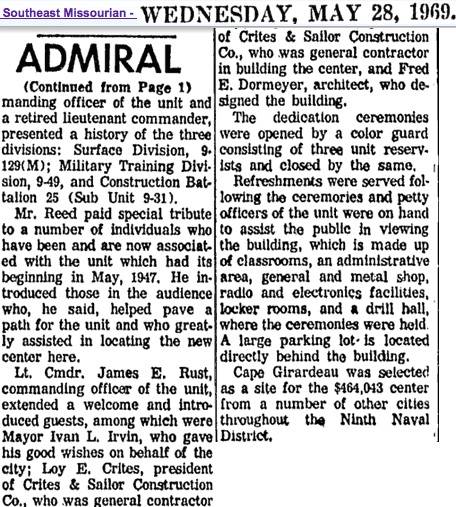 Here's the newspaper's editorial that followed the dedication. 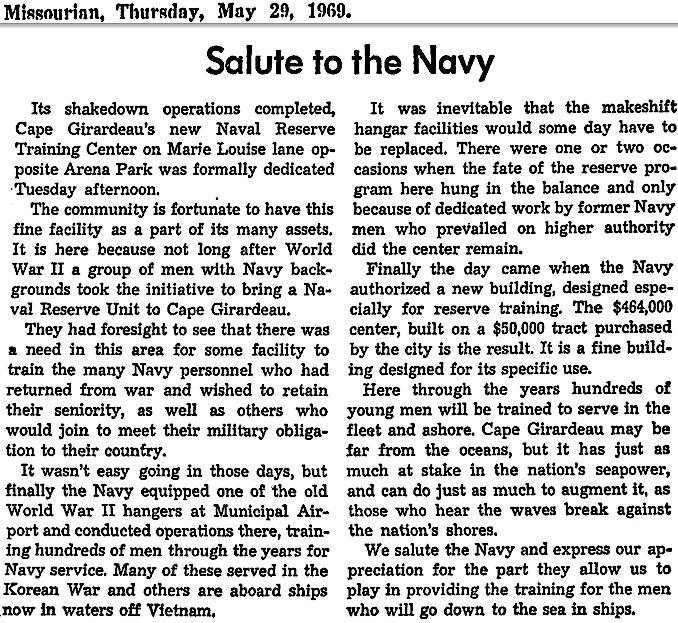