Fiberglass giant has been gone 25 years

A 27-foot statue of an American Indian made its way from Sikeston, Missouri, to Cape Girardeau's proud football emporium on the Southeast campus early in August 1981 and remained there until the summer of 1991.

The only reference to its coming was a stand-alone photograph published Aug. 4, 1981, in the Southeast Missourian. The three-day-a-week Bulletin-Journal newspaper didn't mention the installation at all. 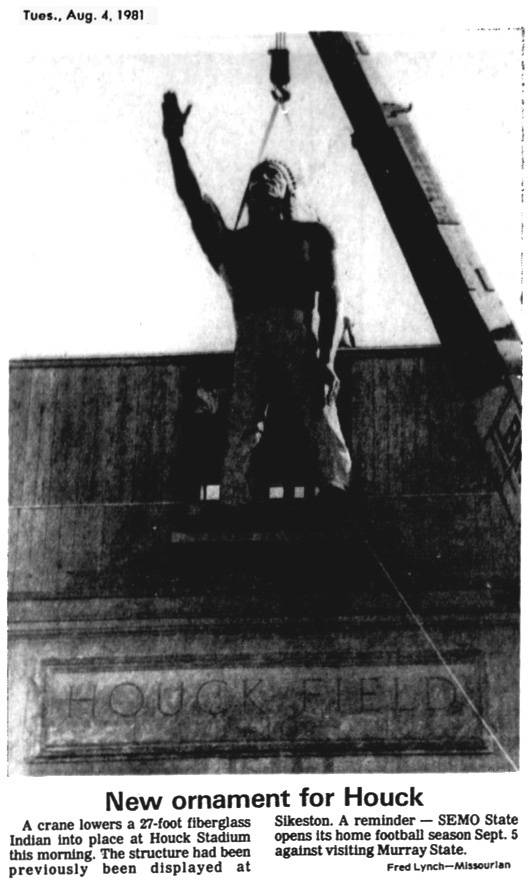 While we have been unable to find a negative for the above photograph, we did locate a couple others that show the behemoth being prepared for its new home. 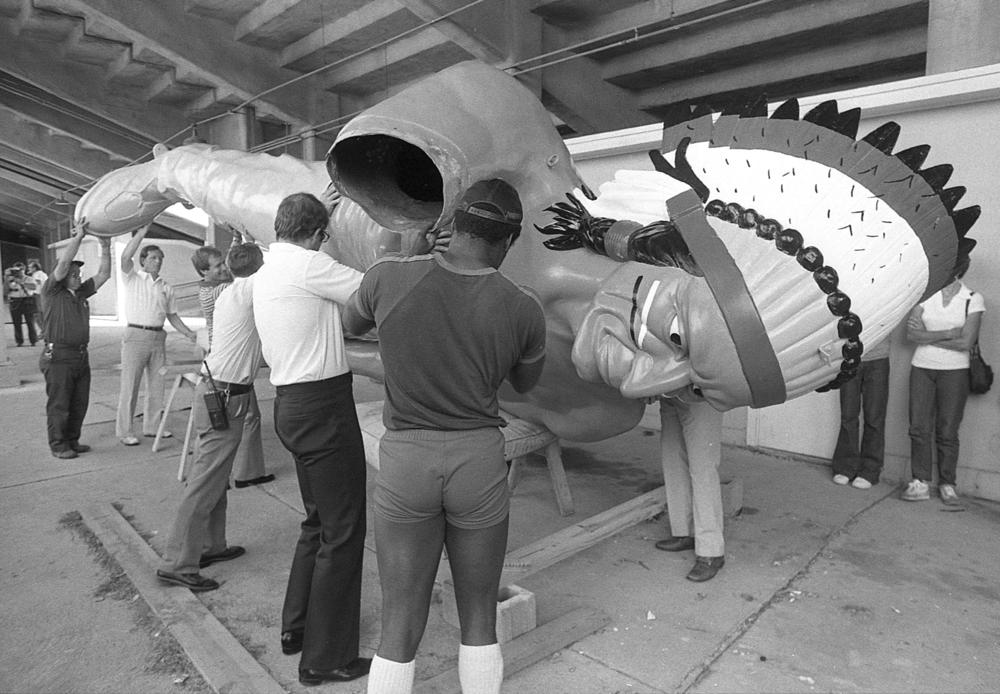 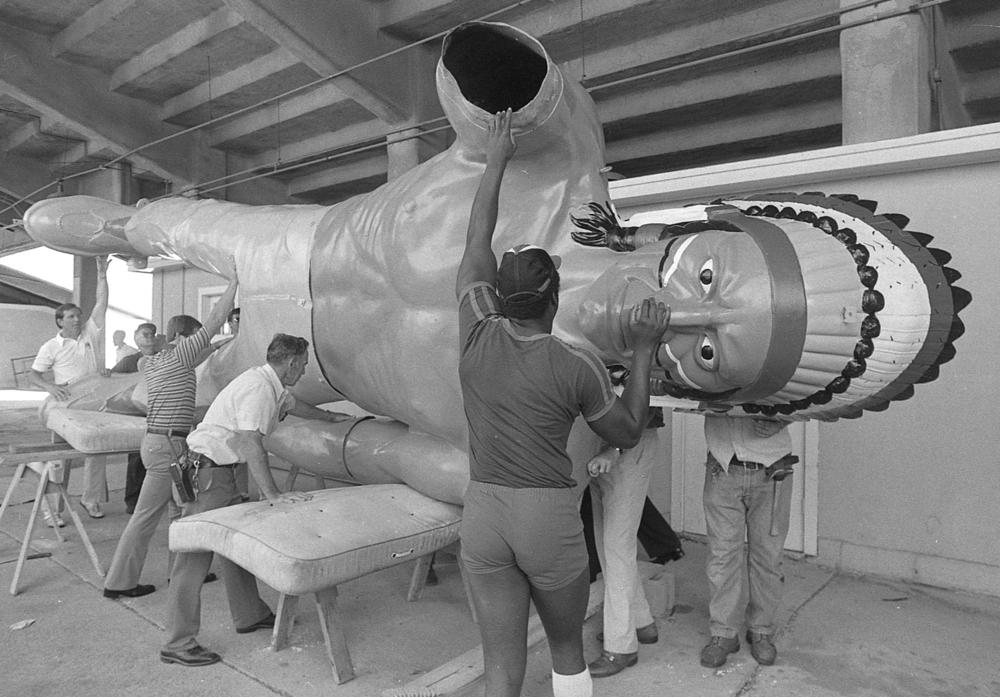 And just as quietly as it was placed above Houck's doorway, it was removed... So quietly, in fact, that no photograph was published of its removal. A July 7, 1991, column by then-sports editor Bill Heitland called attention to the statue's absence.

This isn't the way one might have expected the biggest Indian on campus to make his departure -- disarmed and displaced.

I'm talking about the Indian made of fiberglass that stands about as high as four Kareen Abdul Jabbars, about 27 feet tall, its right arm nearly extending into the Playdium parking lot.

Poised and perched atop the doorstep of Houck Stadium, this Indian saluted crowds that witnessed 10 years of Southeast Missouri State football history from 1981-1991.

The mighty Indian found himself among the homeless, however, when somebody recently liberated the left arm from its customary position.

So officials decided to inspect the area around the pilfered arm and realized that the Indian's parts weren't up to satisfactory standards.

It seems there were cracked portions in the back of the symbolic Indian and it was feared that the fiberglass figure could plunge itself into a crowd of unsuspecting fans. Whoa! This is certainly not the stuff of which Division I schools are made.

So the best action is to retire the plastic behemoth to more innocent fields of endeavor, where pranksters can no longer inflict foul deeds on him.

Upon realizing that the Indian was missing, I started to make some calls on this holiday weekend to find out where he went. Was he sent to Hannibal to work a Mark Twain festival?

Would he protect crowds at the remaining Guns N' Roses concerts this summer?

Well, not quite. Marvin Rosengarten, who was athletic director when the Indian was hoisted into place via a crane in 1981, explained the strange situation.

It seems the larger-than-life Indian, which was bestowed to Southeast In August of 1981, has seen better days.

"It was 25 years old when we got it," said Rosengarten, who is in charge of athletic development at the university. "The statue is actually 35 years old," added Rosengarten. The structure was donated to Southeast after it stood vigil at the War Drum, an establishment that cooked up chickens in Sikeston.

Well, since the Southeast Indian has been unceremoniously retired, Houck Stadium is suddenly without a plastic mascot to greet fans and curious visitors.

The more important issue, however, is where the Indian was taken.

"Vince Seyer, the physical plant director, took it to some field around here," said Rosengarten. "I told him, 'I hope somebody doesn't stumble upon this thing and mistake it for Big Foot or something.'" 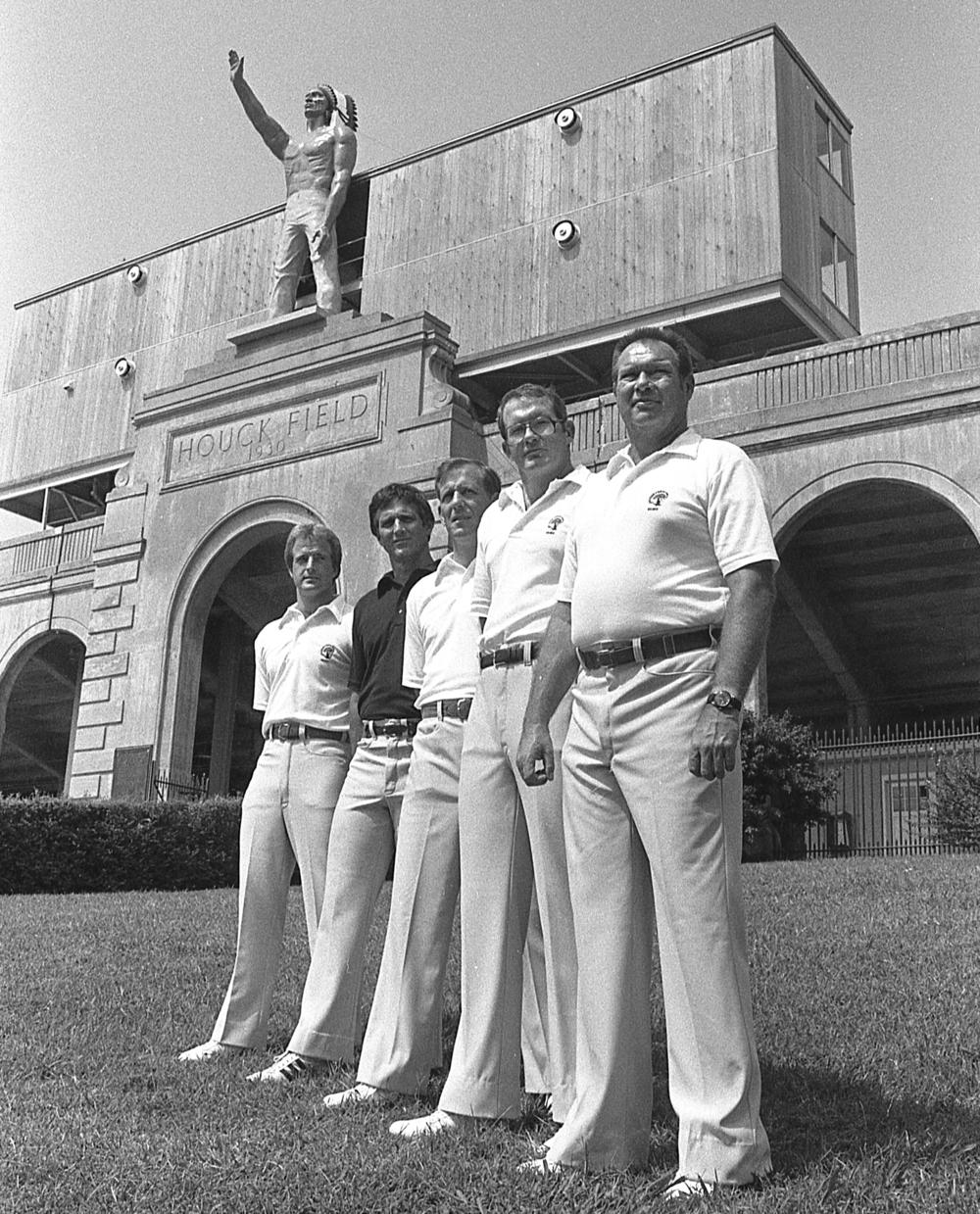 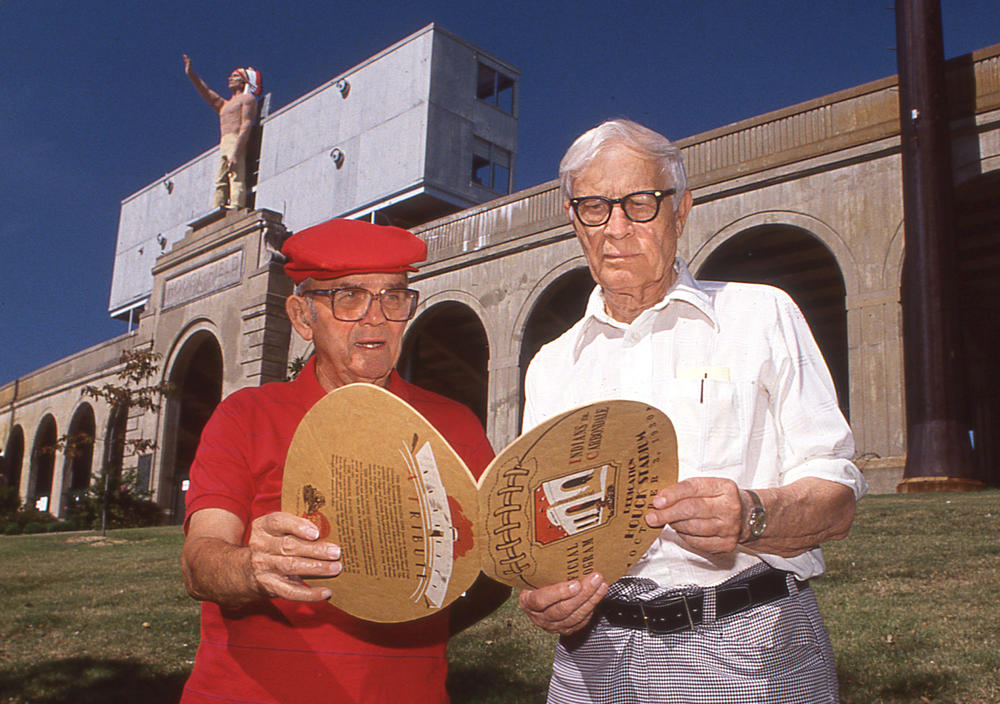 The fiberglass giant can also be seen in the background of this photograph. The gentlemen pictured are Glenn Lampley, left, and Max Neville, who played for the Indians during the first football game at Houck Stadium on Oct. 3, 1930. (Mark Sterkel ~ Southeast Missourian archive)

Dr. Frank Nickell, formerly a professor of history at the university and now head of the State Historical Society's research center here, supplied some details about the Indian in his June 7, 2016, installment of "Almost Yesterday," which originally aired on the university's radio station, KRCU, and can be found on the its website.

According to Nickell, the statue -- named Chief Sagamore -- came to Cape Girardeau from The War Drum Restaurant in Sikeston. He further states that the reason the statue was removed because of the national movement to eliminate the use of Indian symbols as mascots. That movement eventually led to the rejection of "Indians" and "Otahkians" as the names of Southeast's athletic teams and the adoption of the name "Redhawks" in 2004 by the board of regents.

Nickell reports that Nancy and David Bowman, the owners of Chaonia Landing Resort and Marina on Lake Wappapello, purchased the Chief Sagamore. Repaired and renamed Chief Wappalese, the statue was installed on a lookout above the resort.