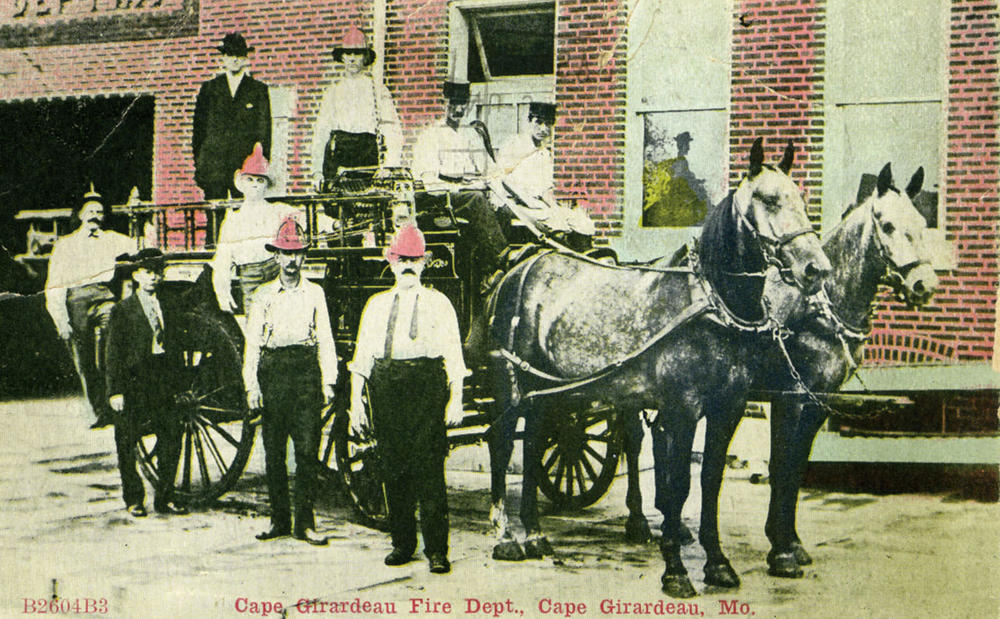 Cape Girardeau has commemorated the lives of several law enforcement officers who died in the performance of their duties, erecting monuments to the fallen at Common Pleas Courthouse Park.

Personally, I think it's time we put up some kind of marker for two firefighters who lost their lives rushing to an alarm on Broadway in 1916: Alex and Joe. No last names.

Alex and Joe were the strong, highly-trained, dapple-gray horses that pulled the heavy fire wagon to blazes in Cape Girardeau from 1909 until their untimely death on June 5, 1916. Alex and Joe came to Cape Girardeau from St. Louis, the steamer Grey Eagle bringing them here on a fine spring day. There curious names came from the two city councilmen who purchased them for Cape Girardeau: Alex Vasterling and Joseph Wilson. Here's the story of the steeds' arrival. 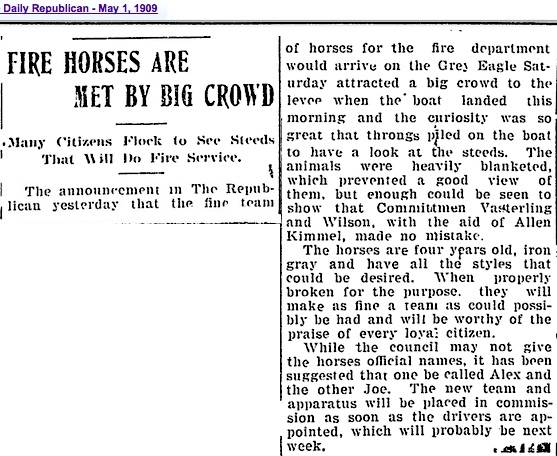 In the days ahead, Leland Kimmel continued to train the horses to pull the new fire wagon, which had been purchased by the city late in December 1908. The wagon contained a fire-suppression chemical reservoir and attachments, ladders and hooks, and 300 feet of one-inch fire hose. Along with training Alex and Joe, I'm sure Kimmel trained the men whose job it was to drive the wagon.

The first real test of the horses, men and equipment came on June 7, 1909, when they answered a call to an old frame house on North Street, near Middle. Here's how The Daily Republican newspaper described the scene the same day.

Chemical wagon arrived ten minutes after alarm -- Flames out in half hour.

The new fire-fighting apparatus was put into service last night, or rather early this morning, and the success of the department in extinguishing the flames in an old frame house was very encouraging. The team of greys responded finely to he signal and made the run in excellent style, reaching the scene of the fire, some six blocks distant, just 10 minutes after the alarm was turned in.

By using the chemical engine the flames were kept under control until the arrival of the hosemen, and in consequence the building was saved (with only a) slight loss, and the fire was out in 30 minutes, the engine back the house and the men in ed in less than an hour after the sounding of the alarm.

The building is an old frame house of very inflammable material occupied by Mrs. Ruehman on North Street, near Middle Street, and the fire was supposed to have originated from a lamp which had been left burning through the night.

The damage by fire was slight, and the only damage to the household goods was from the water used in extinguishing the flames.

Alex and Joe continued to serve Cape Girardeau until 1916. In March of that year, the city suffered what is likely the most devastating conflagration in its history. The blaze which destroyed the Terminal Hotel, the Houck Building and the Riverview Hotel -- all lined up in a row along Water Street -- was examined in one of my earlier blogs.

Recognizing the need for modern fire-fighting equipment, the Cape Girardeau City Council called a special bond election the following month, but voters turned down the measure.

More, smaller fires followed, including two on May 9, which saw the firefighters' efforts hampered by the old, damaged fire hoses they were forced to use. During the first fire that day, the roof of the Martin Roth house on South Middle Street was burned off and most of the family's household goods ruined. The second blaze occurred two hours later in the rear of the Sorrell clothing store at 424 Main St. While the flames did little damage in that case, water ruined "nearly the entire stock of goods carried by Sorrell."

In order to reach the clothing store, firefighters "proceeded to fight the flames by knocking down the door of (Weiler) jewelry store and taking their hose through it to the window which is between the two stores. No sooner had the water been turned on then the hose gave way and water flowed out in the jewelry store, soaking it from one end to the other..." A few days later, Mrs. N.S. Weiler sold her late husband's store to long-time employee Hugo Lang.

The day after the fire, downtown merchants became pro-active, voting to purchase 1,000 feet of new hose for $850.

The City Council, probably feeling even more pressure to protect the city, called another special election to vote on a $15,000 bond issue. The money from the bond issue would be used to replace the old, rotten hoses and buy new, motorized fire-fighting equipment. This time the issue carried by 59 votes.

On June 5, 1916 -- almost seven years to the day Alex and Joe made their first fire run in Cape Girardeau -- the two grays answered an alarm at The Daily Republican newspaper building. A storm had down power lines on Lorimier Street, plunging the area into darkness. Not seeing the downed lines, the horses stepped on them as they prepared to turn right onto Broadway. Both animals were killed instantly. Here's the story from the next day's Daily Republican.

FIRE HORSES DIE ON LIVE WIRE ON TRIP TO A FIRE

The two best of three fire horses owned by the city were instantly killed late Monday evening when they stepped on a live wire at the corner of Broadway and Lorimier Street.

The fire wagon was making a trip to answer a fire call from The Republican office. The storm had torn a wire carrying the full current of the electric lighting system of the city and let it fall across the street. Into it the horses were driven while the streets were unlighted because of the storm's havoc with wires.

The two animals fell dead instantly when they touched the wire. One horse is believed to have struck it first, letting the current run through it and its gear to the horse, which dropped as instantly.

Fireman George West, sitting on the diver's side and guiding the horses, says that he got the force of the current for an instant. He was uninjured, although shocked.

Martin Oberheide and Casey Ransom were behind him on the wagon.

Volunteer firemen arrived soon and went to The Republican office to complete the trip started by the regular firemen. A fire extinguisher had previously been used to extinguish a small blaze caused by the burning through of a gas pipe when an electric wire, evidently struck by lightning, short circuited and burned. The lighted gas spurted from the fixture on the west wall of the business office, just inside the front entrance.

The wires entering the building were cut and the gas turned off, so that the blaze died at once. No great damage was done.

The loss of the horses is serious for the city fire department. The third horse and an untrained animal are now depended upon to draw the heavy hose wagon.

A white rooster which perched itself on the rear axle of the wagon rode jauntily to the fire, jumped off and waded around in the water near the Presbyterian Church, and then rode back to the station and went to sleep.

That same month, the city fathers replaced Alex and Joe with Frank and Pat, two big bays purchased by Mayor Fred Kage in Cairo, Illinois, for $210. They served the city until December 1916. On Dec. 7 the city's new pumper truck arrived and a week later its new hook-and-ladder truck.