Attending Notre Dame High School in the late 1970s, it was impossible not to know the name "Tony Rubich." But I really didn't know much about the standout ND coach until years later.

I recently ran across a story about Rubich's departure from the school in 1966. That sent me on a hunt for other items related to the first Notre Dame High School Hall of Fame inductee. 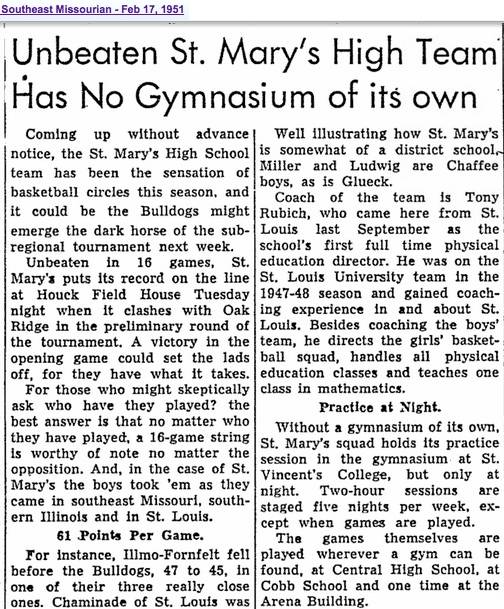 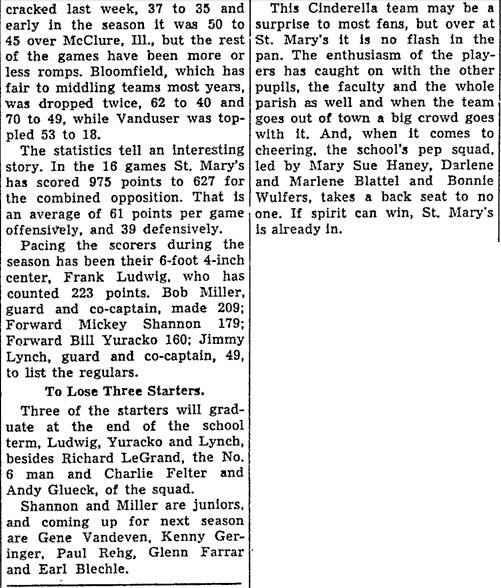 After racking up two more victories, the Bulldogs' Cinderella story came to an end at the hands of Oran High by a narrow, 55-53 margin. The 'Dogs played Delta High for third place in the tournament, edging out the Bobcats 51-48.

There probably a lot of sighs of relief, after Rubich re-signed with Notre Dame the following year. 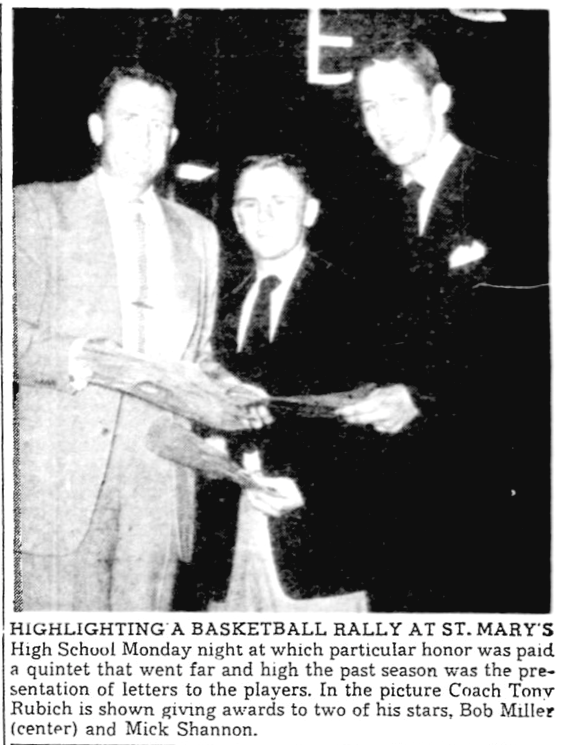 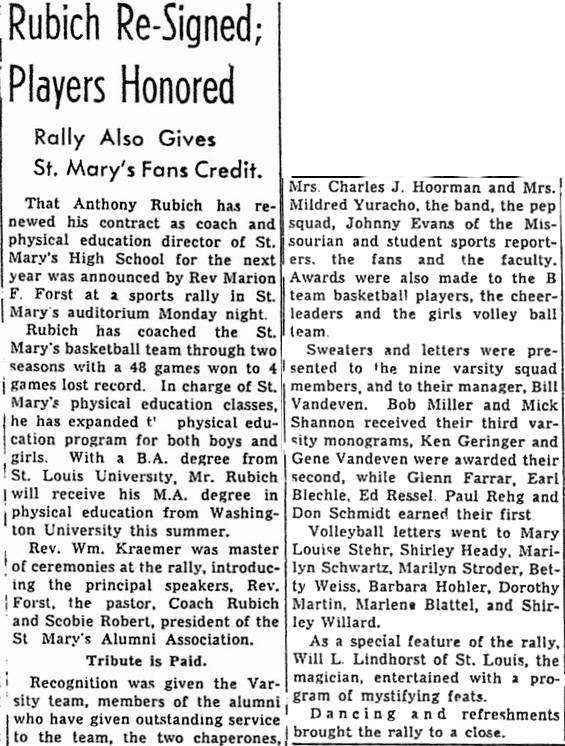 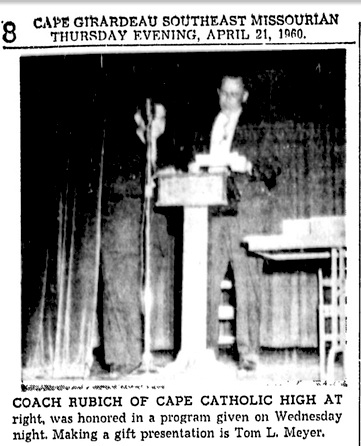 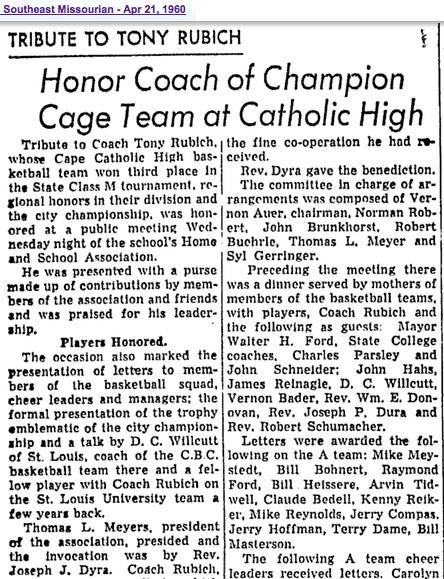 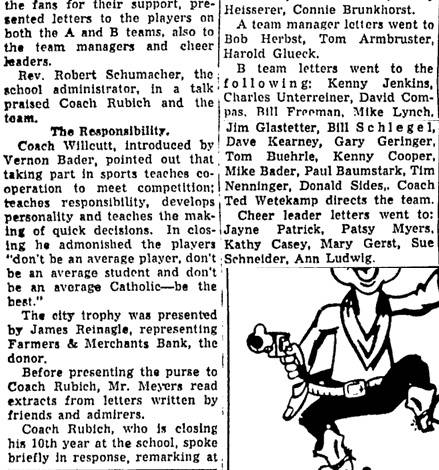 But all good things come to an end, and in April 1966 Rubich announced his plans to leave Notre Dame and move to St. Louis. The close of the school year brought a farewell tribute to Rubich. 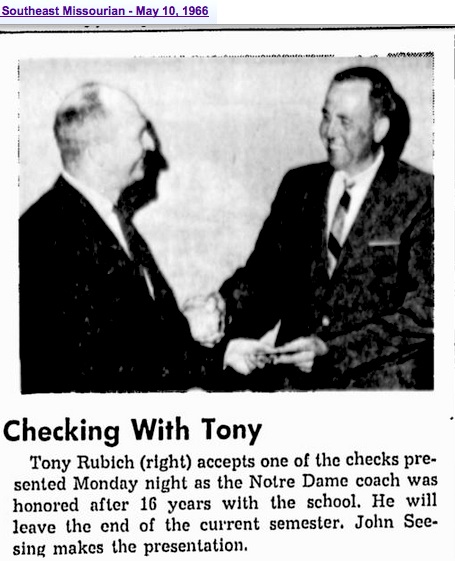 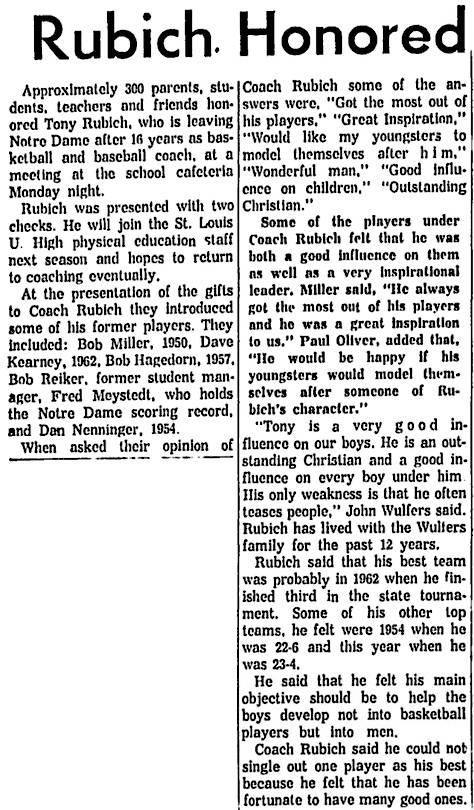 One more honor awaited the man who coach Notre Dame basketball teams from 1950-1966. In January 1985 he was the first inductee into the Notre Dame Hall of Fame. 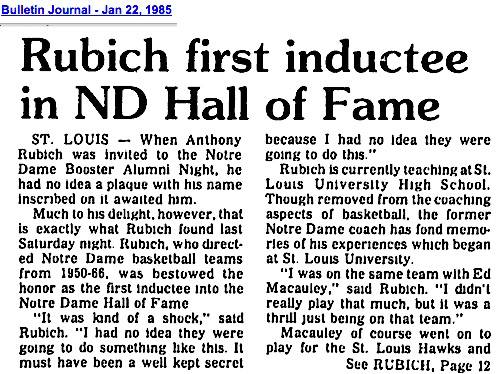 A non-bylined story published in the Missourian's Bicentennial Edition on July 4, 1976, sums up Rubich's career at the Catholic high school here:

"In 1950, Rubich took over as St. Mary's (now Notre Dame) coach. In his initial season the Bulldogs, led by Frank Ludwig, Bob Miller and Mick Shannon, lost but one game, finishing 17-1. The loss was to Oran in sudden death after two overtimes were played.

"In 1951-52, the Bulldogs had another outstanding season, compiling a 28-4 record. The season's highlight came on Nov. 29, 1951. The Bulldogs were slated to face Puxico, the defending state Class B champions and holder of a 45-game winning streak, in the finals of the Delta tourney. Coach Rubich offered to get a flat-top haircut if his team could beat Puxico. Well, Rubich got his flat top as a last second basket by Gene Vandeven gave St. Mary's a 62-61 upset victory.

"Later in the season, however, Puxico defeated St. Mary's twice, including at the Poplar Bluff regional, and went on to capture its second consecutive Class B state title.

"The 1951-52 season was the first season the Bulldogs participated in the College High Christmas tourney and ity Series. They finished second to Cape Central in the three-team round robin city series.

"In the 1954-55 season Cape Catholic got a new gym. But that season and the succeeding one, the Bulldogs played sub-par, finishing below .500.

"The 1956-57 season marked the first year Cape Catholic (now Notre Dame) held its own tournament, with the Bulldogs losing to Advance, 67-56 in the finals.

"The Bulldogs, however, bounced back in 1958-59. Behind the production of Joe Reiker, Cape Catholic finished 15-9, losing to Advance in the regional finals.

"Cape Catholic had one of its finest season in 1959-60. Paced by the balanced attack of Claude Bedell, Bill Heisserer, Ray Ford, Bill Bohnert, Ken Reiker, Mike Meystedt and Arvin Tidwell, the Bulldogs advanced to the Class M semifinals before losing to Bolivar. But the Bulldogs bounced back the next day to defeat Redemptorist of Kansas City in overtime, 76-71, and finish the season 21-8..." 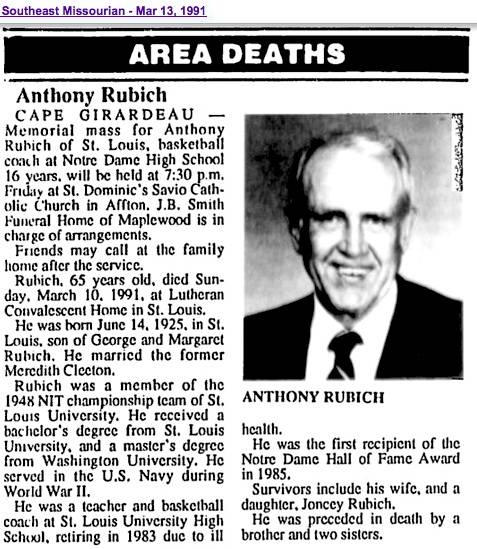