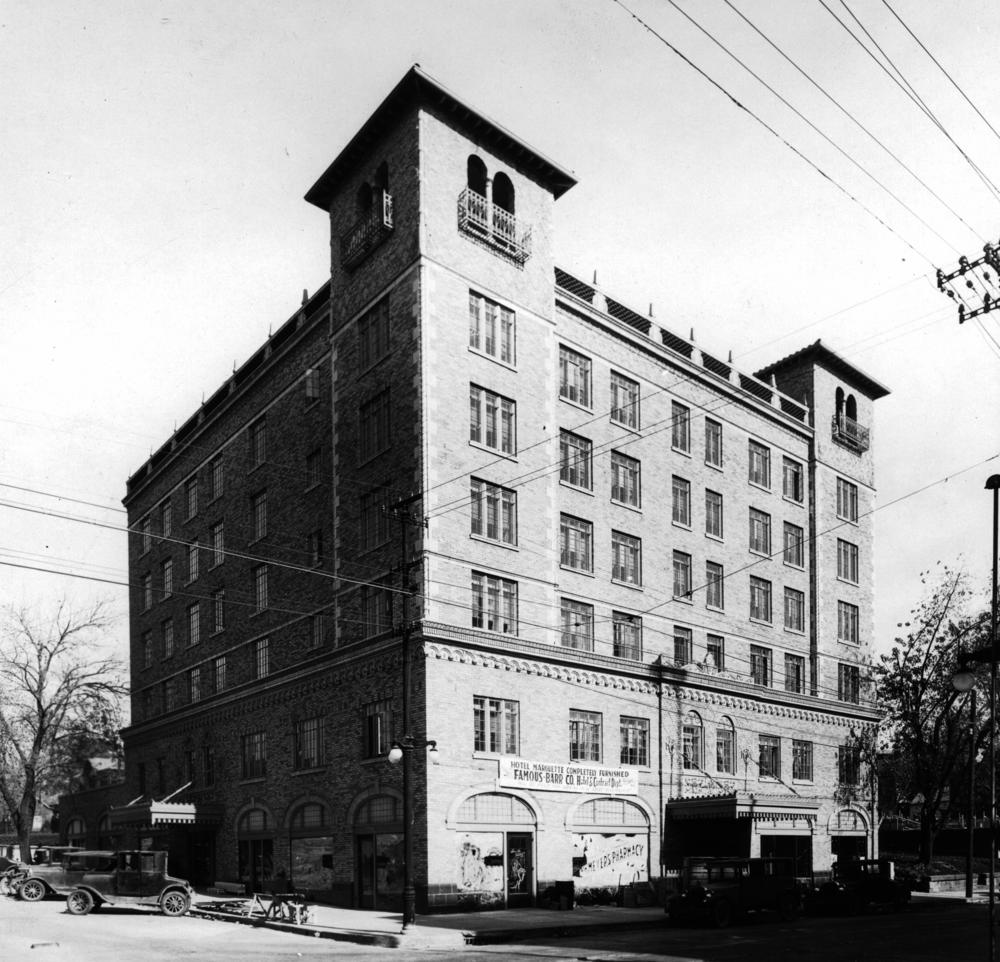 In 1926 business, civic and government officials in Cape Girardeau secured the promise of a traffic bridge that would span the Mississippi River. Along with that promise came a problem: How would Cape Girardeau accommodate the mass of tourists who would take advantage of the new span?

Cape Girardeau in 1926 had only two downtown hotels, the St. Charles at Main and Themis and the Idan-Ha at Broadway and Fountain. Neither was what you would call elegant or modern. And so, the same folks who concocted the scheme to put a bridge across the river here also came up with the idea to build a new, modern hotel to serve the automobile-traveling public.

That hotel was the Marquette, and it opened at the northeast corner of Broadway and Fountain Street in a gala event on the evening of Saturday, Nov. 17, 1928. Eight thousand people attended the formal opening.

The Southeast Missourian welcomed its Broadway neighbor with numerous stories and advertisements that day. Unfortunately, the main story -- written by G.D. Fronabarger -- describing the interior of the building was badly damaged on microfilm. Still, what's legible is worth sharing. The ads that fill the edition also give you an idea of some of the subcontractors involved in the building's construction.

To the right of the corridor as one enters (the hotel) is the archway that (offers) a view of the clerk's desk... The mezzanine floor extends on the south and east side of the lobby, the south side is (fitted) for a radio broadcasting room, which has a heavy plate glass wall and so arranged that (hotel) patrons may sit on the mezzanine floor and observe... This floor also affords access to five sample rooms... (Sample rooms were used by traveling salesmen to display their wares. -- Sharon)

The windows of the lobby are (hung) with heavy crimson colored drapes. Two paintings hang from the walls, one over the entrance to the coffee shop on the Fountain Street exposure and the other over the mantle in the center of the ... wall of the lobby...

Twenty of the rooms in the building have a twin bed arrangement. Between the beds are placed telephone stands and a telephone... The rooms also are equipped with upholstered chairs and a desk...

The suites are more elaborately equipped and have reclining chairs. Each of the rooms has novel light fixtures and the hotel throughout is designed to serve the guest with a homelike comfort.

Access to all of the floors or to the roof may be gained either by two electric elevators or by a winding stairway. On the roof one has a splendid view of the city, the Mississippi River and prosperous Illinois farms. The towers of the building are lighted at night and the whole roof will be converted into a roof garden next summer...

This completes the present equipment of the new hotel with the exception of a modern barber shop on the first floor on the Fountain Street side of the building and immediately on the south of the entrance from the street. The basement of the structure is equipped with storerooms and a furnace. 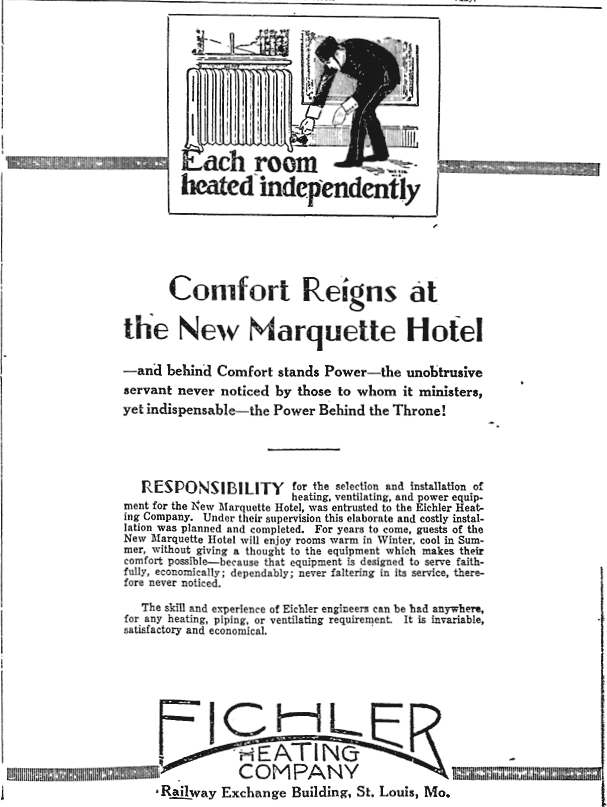 The room at the intersection of Broadway and Fountain Street is occupied by Dormeyer's third drug store. It has been established there with equipment that was specially made for the location. A great amount of light and four display windows lend a charm to the place. 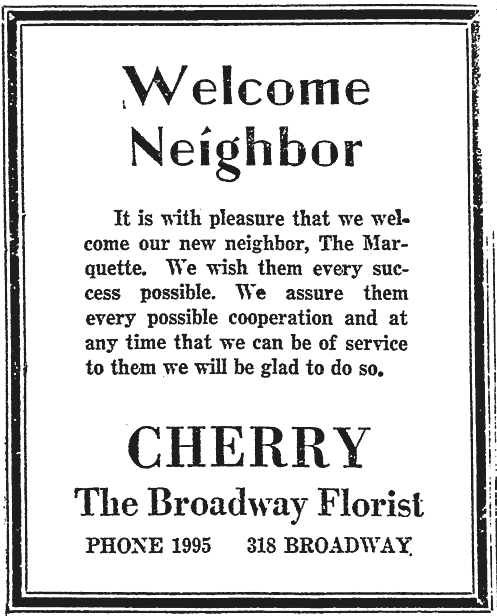 Within a few more months the new hotel will be able to serve the motorist as well as the guest who travels by train or otherwise. A 50-car parking garage is being erected on the Fountain Street side of the location and will be ready for use soon after the first of the year. This new garage will be of similar construction to the present hotel building. Here, complete servicing will be available to the motorist, and storage for his automobile over night will be provided. 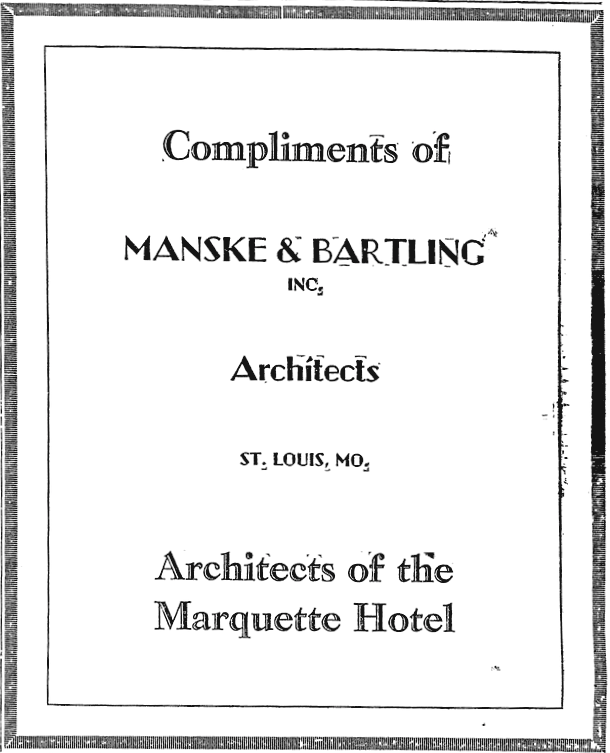 The building contains approximately 325,000 brick, of which one third, or 108,000 are face brick. A total of 121 tons of reinforcing and other steel was used in the structure, and 2,500 barrels of cement were used. This was combined with 2,000 tons of crushed stone.

Among the many admirable appointments of the new Marquette is the great amount of light available to the rooms. The building contains 132 exterior openings, in which there are more than 500 window units. The corridors lead to fire escapes on the eastern exposure.

From the standpoint of equipment, beauty, and fitness for public service the new Hotel Marquette is comparable to the best hotels in the country, according to R.W. Wallace, managing director of the Interstate (Hotels Inc.) chain. The Marquette is 35th in (the) chain, the hotels of which are scattered throughout the country. The new hostelry here is reported to be much more elaborate than the new Hotel St. Charles at St. Charles (Missouri), which the company recently opened. W.J. Hamilton, manager, said that it is the most beautiful hotel structure in Missouri outside of St. Louis. 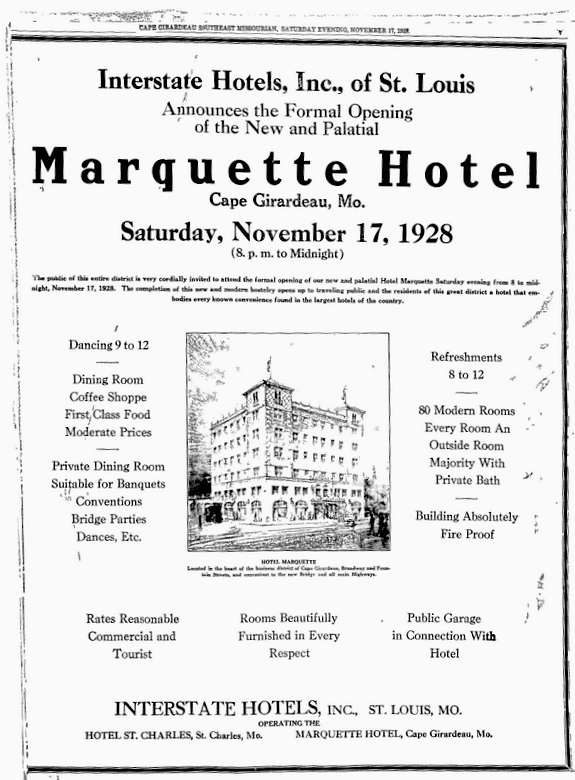 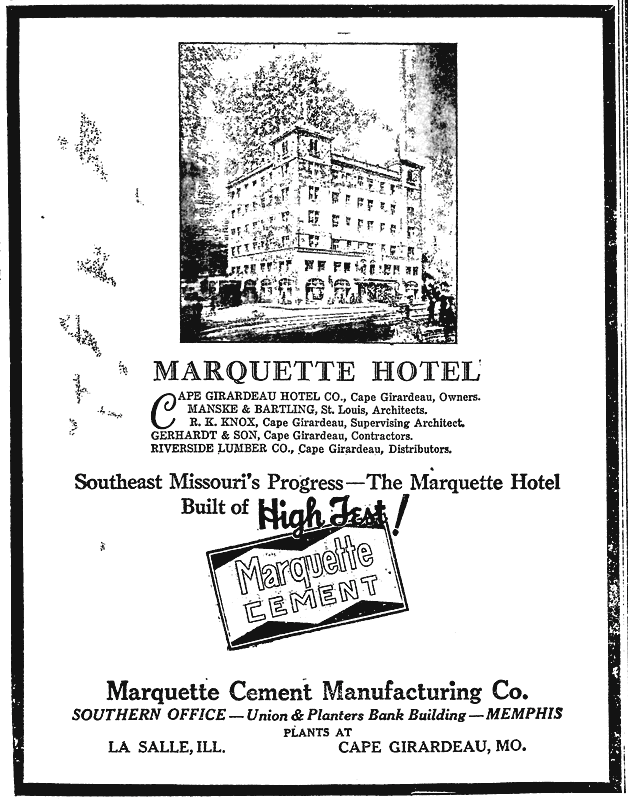 TELLS WHY MARQUETTE WAS PICKED FOR NAME OF HOTEL

How did the Hotel Marquette get its name?

That question has been asked many times by Girardeans and a reporter for The Missourian was prompted to ask those who selected the name of the hostelry.

Here's the explanation, as given by one director: 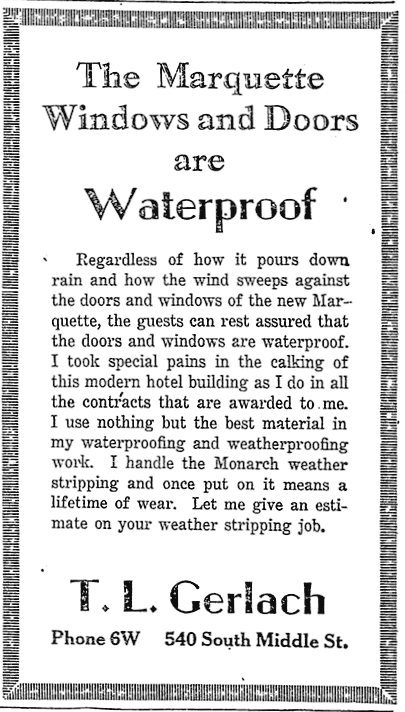 The minimum rate at the Hotel Marquette for a guest at night is $1.50, for which the guest will have a room equipped with hot and cold running water facilities and a bed as good as any in the building.

There are also a $2 and a $3 single rate, which gives the guest a private bath. The last mentioned is the maximum single rate. The highest double rate will be $6. The rates for the suites differ with the number of persons occupying them, ranging from one to four persons. The sample rooms off the mezzanine floor will be $6 for 24-hour service or $4 for 12-hour service, while on 24-hour service an extra person will make the rate $7 for two.

The regular weekly dinner rate will be $1 and the special Sunday dinner will be $1.25. 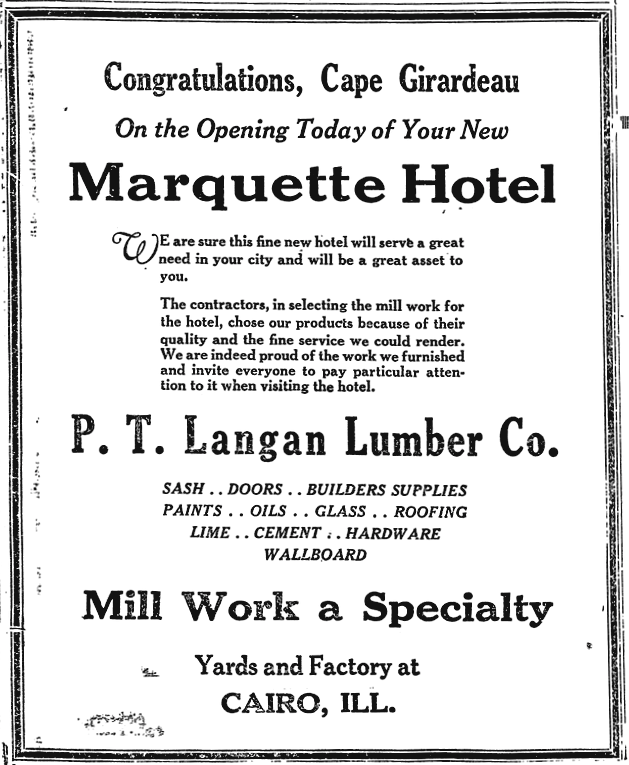 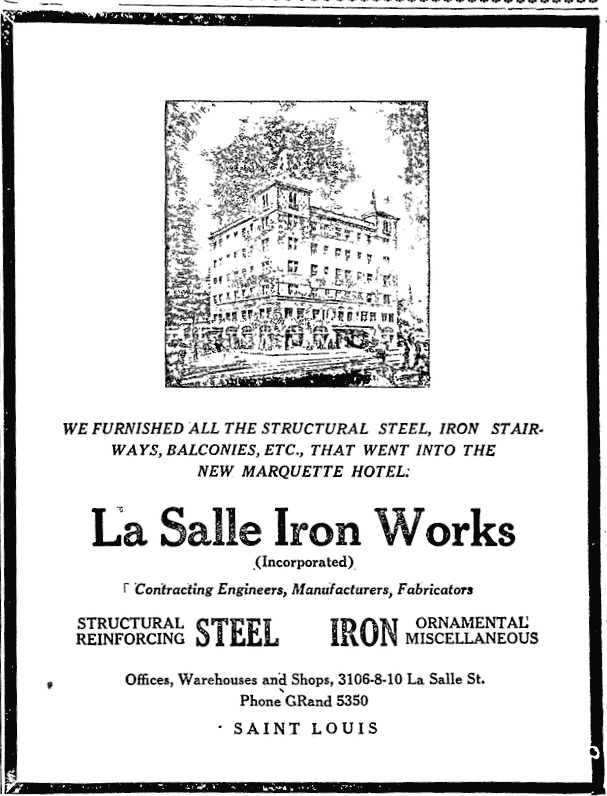 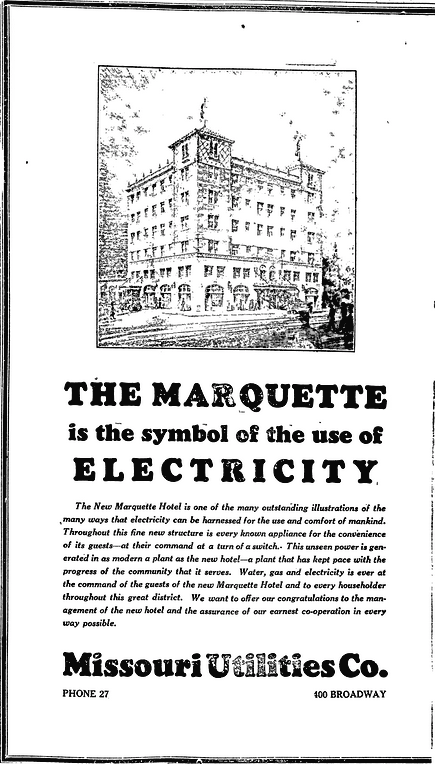 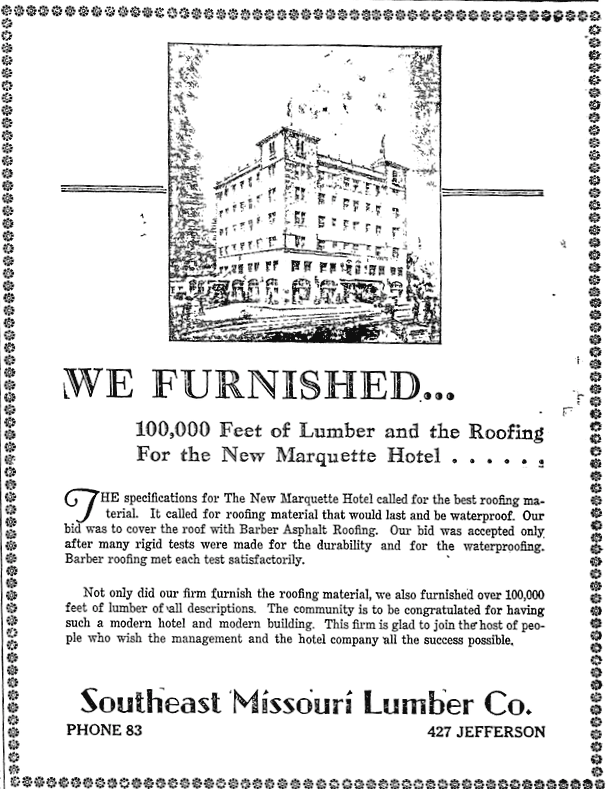 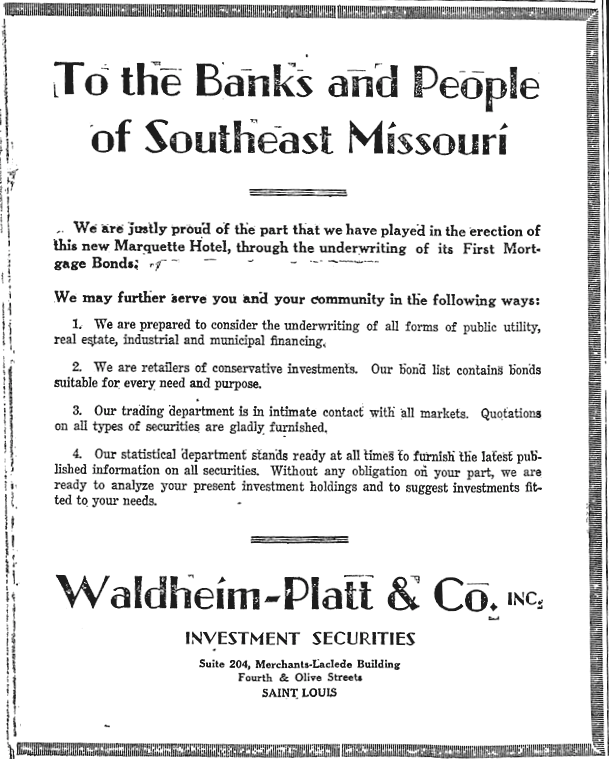 The day after the opening, the Southeast Missourian reported on the gala event. Sadly, the newspaper didn't photograph it. 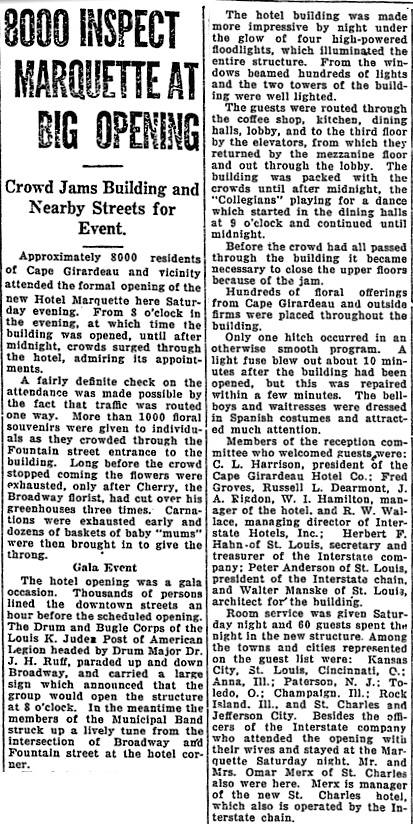 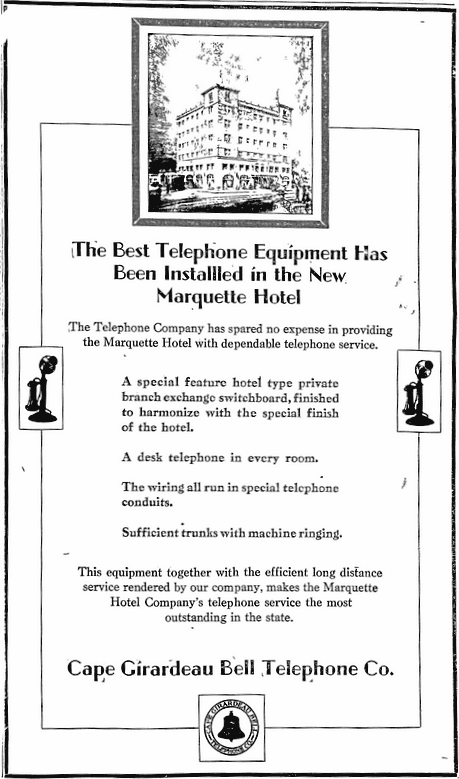 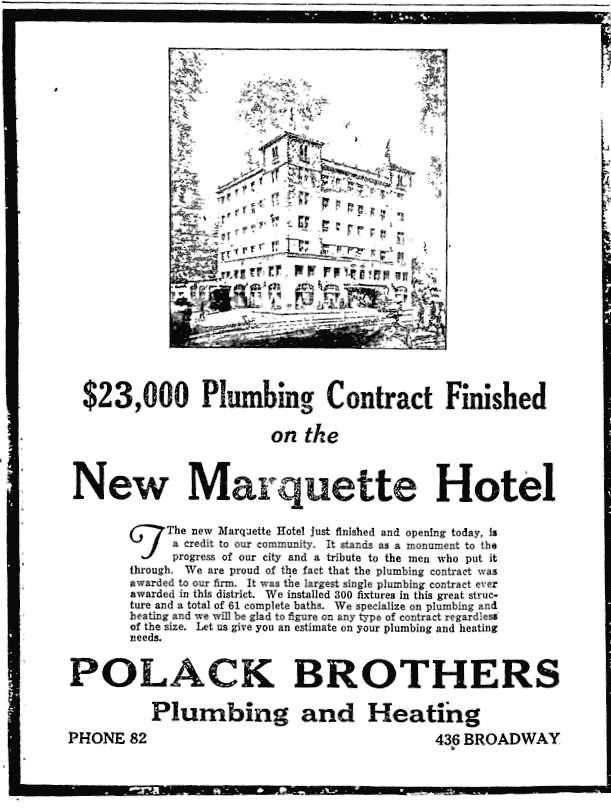