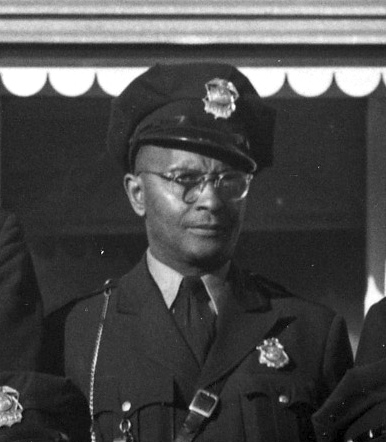 Joe Woods had the distinction of being the first African-American to serve on the Cape Girardeau Police Department.

A native of Mississippi, Woods spent most of his life in Cape Girardeau, including almost 25 years as a patrolman and plainclothes officer with the local force. Several days after his official retirement, the Southeast Missourian published a story about the law enforcement officer.

ONLY MEANT TO WORK FOR FEW MONTHS

For the first time in more than 20 years a Cape Girardeau police officer with almost 25 years of continuous service here has retired.

The occasion called for a special appreciation banquet which was held Monday night at the Arena Building in honor of Joe Lee Woods, special police officer.

"He always was cheerful, he got the job done and he never grumbled when given an assignment,' Capt. Marshall F. Morton of the police department here said of Mr. Woods' record.

Officer Woods retired Friday. He said he threatened to retire after his 70th birthday, which was Jan. 18. But he thought it would be a good April fool joke t really keep his word on April 1.

"I have worked under seven police chiefs here, and I liked them all. But when you get to be 70 years old, it's time to retire and enjoy the time you have left,' Mr. Woods said.

"He'll be hard to replace. He was looked up to by everyone, and he was honest," Capt. Morton said.

One of his favorite pastimes is fishing. Police here presented him with a fishing rod and reel at the banquet. Tom Freeman of the regular police force and Ralph Bowerman of the Auxiliary Police prepared the fried chicken dinner.

Mrs. Woods said that she was glad that he had Joe home for good and was looking forward to many happy outings.

Officer Woods started his police duties on June 15, 1941. He worked most of his time in the Good Hope and Smelterville areas. Most of his duty hours were spent on Friday, Saturday and Sunday nights, Capt. Morton said.

He often investigated cases during the week also. He know most people in town and worked as a plainclothes policeman much of the time.

Officer Woods told the banquet guests the story of how he started to work for the police department here:

"I was returning home from Commerce one night and was arrested and booked for speeding as I came into town. I had promised to take my daughter to a late movie and I was running late. I went to see the mayor. I had worked for the mayor during an election and asked him if there was some way I could get out of paying this fine.

"He said, 'I'll help you if you'll help me.' Then he said, 'We need a good (black) to patrol during the weekends.' I said, 'I'd be glad to help you there. You call out some names and I'll tell you if they're right for the job.'

"Well, he called out Joe woods. And I said, 'No, I don't think I'm the man for the job.' But he drove a hard bargain, so I agreed to try it out. I only expected to work a few months when I started, but the more I worked, the more I liked it."

Mr. Woods said he appreciated working with the other police officers here and intends to enjoy his retirement. He said his immediate plans call for some fishing and working around the house. Later, he intends to visit relatives in Los Angeles, California, and Chicago.

According to his obituary, Woods lived most of his life in Cape Girardeau, moving here from Commerce, Missouri.

He was married twice. He and Louise Cardwell were wed in 1928 in Cape Girardeau. But she preceded him in death on Feb. 16, 1931. Along with Joe, Louise was survived by an 11-month-old daughter, Meta.

Woods' obituary notes: "Woods was a police officer in Cape several years, and worked at Marquette Cement Co. 39 years, retiring in 1962. He was a member of Second Baptist Church, American Legion Post here, was master mason of Harmony Lodge 40, member of a senior citizens group, was a Scout leader, and was active in other organizations. He served in (the) combat infantry during World War I."