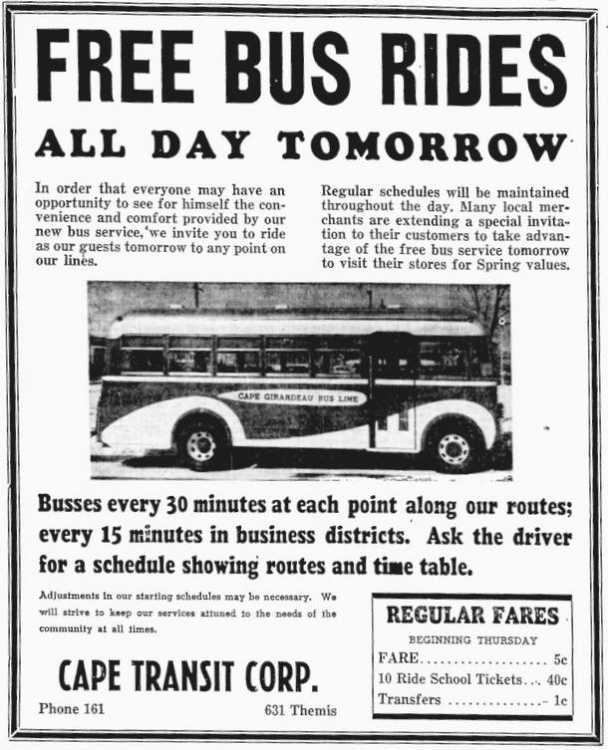 I wasn't around in 1941, when three brand new General Motors city buses rolled onto the streets of Cape Girardeau. But I'll be residents were thrilled with the innovation, especially those who were left hoofing it to work after the street car system suspended operations in 1934.

The colorful buses of the Cape Transit Corp., began operating here the morning of April 2, 1941, only about five months later than had been hoped.

The bus service was authorized by city ordinance in August 1940. At the time, the city fathers anticipated that the new mass transit system would be operating by November or December of that year. In September the city gave the permit to operate the municipal bus line to the Bee Line Transit Corp., of Danville, Illinois. It announced it would do business here as the Cape Transit Corp.

Delays then frustrated plans. Each successive article in The Southeast Missourian newspaper seemed to push the start date a little further back. The main delay was in getting the four new General Motors buses ordered for the Cape operation. Finally, on the night of Sunday, March 30, 1941, the vehicles arrived from Pontiac, Michigan. A front-page article in the next day's Southeast Missouri described the beautiful transports as "painted yellow, with trim in tan and red, and the interiors painted green."

It was announced that two days hence -- Wednesday, April 2, 1941 -- three of the new buses would be put to use, the fourth being kept in reserve. Missourian articles told the story of the start of the city bus line here.

With the arrival of four new General Motors buses, the Cape Transit Corp. announced today city bus service will be started at 6:30 a.m. Wednesday. First-day rides will be given free of charge. Three of the machines will be in service regularly, with a fourth to be held in reserve.

Manager H.R. DeTournay said the machines were brought here from Pontiac, Mich., Sunday night. They were being serviced and polished at the Thompson Garage, 631 Themis St., which will be maintenance headquarters for the line.

Two are 23-passenger machines and two are 21-passenger buses, Mr. DeTournay said. They are painted yellow, with trim in tan and red, and the interiors painted green.

It had been feared there would be some delay in getting delivery of the buses this week, but they were ready to leave the factory this weekend.

Each of the three buses will travel over all the four routes, Mr. DeTournay said, with 15-minute service downtown, and service each 30 minutes in the outlying areas. Routes will be extended as it is found they are required.

Drivers will supply information to the patrons, answering questions that will come up, as the service is started. Two operators will be on each bus at the start.

Nickels, the fare, will be dropped in the meters, but the penny, if a transfer is required, will be handed to the driver. The transfer will be purchased when the passenger boards a bus, if one is needed. When the passenger desires to leave the machine, he will signal by a buzzer, half a block from the destination.

Stops will be made at any intersection a passenger is to be picked up or discharged. Downtown stops are indicated by painted curbs, and signs are to be installed at these locations.

Route headquarters are designated as Main and Broadway, but no station will be maintained there.

Bringing the four new buses here were Mr. DeTournay, Joe Mack of Westville, Ill., Gale Dalton of Cape Girardeau and Pete Giacoma of Cairo, Ill. Mack will be here for a few days as an instructor for drivers. 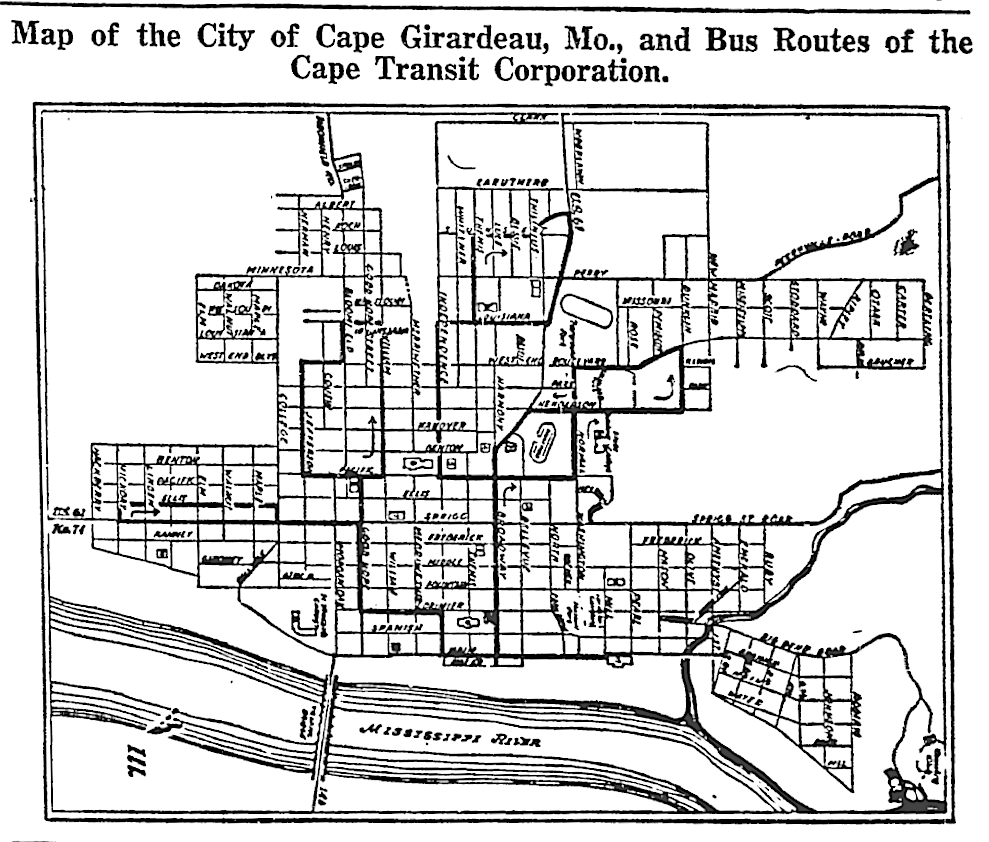 From The Southeast Missourian; Wednesday, April 2, 1941.

Operation of motor buses in Cape Girardeau were started this morning by the Cape Transit Corp., with three new machines circulating over routes which the company has designated to serve. Today was free fare day and a number of Girardeans took rides, and a heavy "business" was expected late today when school boys and girls will be free to ride.

Three of the four machines were put in service, after some trial trips for the drivers were made around the city Tuesday.

Charges of fares will start Thursday morning, the rate to be 5 cents. An extra penny will be charged, when a transfer is necessary.

Headquarters for the company will be the Thompson Garage, 631 Themis St.

From The Southeast Missourian; Thursday, April 3, 1941.

Wednesday was "bus day" in Cape Girardeau and almost everybody in town, it seemed, turned out to take a free ride as the Cape Transit Corp. inaugurated service. Above, pupils of Franklin School are shown jamming the entrance to one bus, while (below) others are shown entering another. 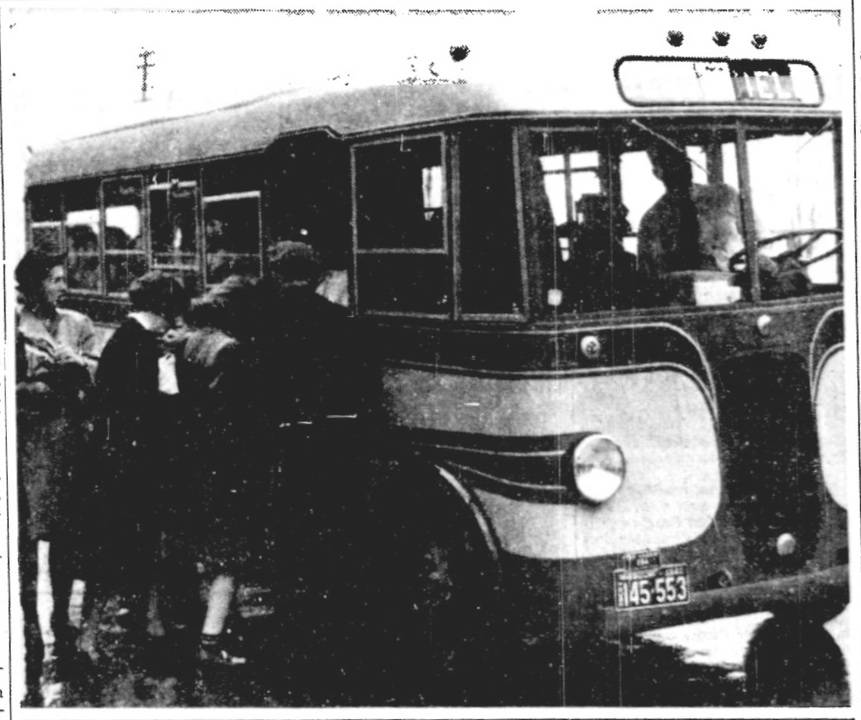 An estimated 5,000 Girardeans took a free ride Wednesday on one of the four new motor buses the Cape Transit Corp. put into service, with rides being free for the day. Some had to be turned down as the machines at times moved along the routes packed full.

Regular service was instituted today. Manager H.R. DeTournay said drivers are becoming accustomed to their duties, and the day's travel Wednesday was without mishap. The machines will run from 6:30 a.m. to 10:30 o'clock at night, seven days per week.

Cape Transit Corp. continued to operate until May 31, 1969, when bus service was shut down because of lack of passengers, the same reason the street car system ended.