The publishers of the Daily Republican's 10th Anniversary Edition may have seen Gordonville as "hustling" and Daisy as "beautiful," but they declared the town of Appleton, with its own roller mill and beer brewery, as "progressive." 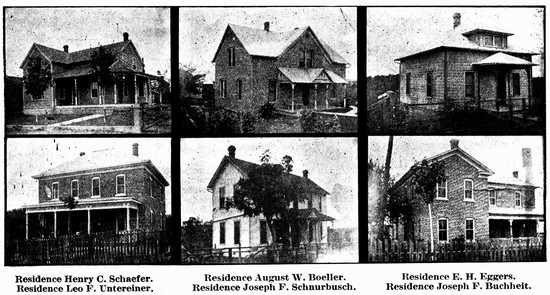 Appleton is located at the extreme north end of Cape Girardeau County, about 14 miles north of Jackson, the county seat. It is situated on beautiful Apple Creek, which is the dividing line of Cape Girardeau and Perry counties.

It was settled in 1824 by John McLane and John Scholtz. Up to the year 1859 it was called Apple Creek. It was then incorporated and named Appleton. In 1829 the first store was opened by the firm of Kimmel & Taylor. About that time a post office was opened. This firm was later succeeded by George Clodfelter and W.H. McLane. George Clodfelter was one of the first postmasters. About that time there was a mill built there by Alfred McLane, which was later swept away by the waters of Apple Creek. This mill was run by water power, same as the mill of today. During those years the village acquired a considerable population and was an active business point in the "fifties," but later it declined somewhat.

In the year 1856 Casper Ludwig started a brewery, and he also opened a saloon here about the same time, selling his brewery's products. The brewery was located at the same spot where the Appleton Brewery and Ice Co.'s plant stands today.

In 1865 Theo. Sachse, after being discharged from the Union army in the same year, opened a mercantile business there and continued it for a number of years. Later John Schaefer succeeded him, who in 1908 was succeeded by the present mercantile firm of Schnurbusch & Buchheit. Among other businesses operated during these years was a tanyard by Sam McLane. The following places of business are located here at present: A flour mill operated by Leo Unterreiner and Joseph Buchheit, which is run by water power up to the present time; they also operate a sawmill which is also run by water power.

The firms of Schnurbusch & Buchheit and J.M. Cotner are in the general merchandise business and the saloon is operated by Hugo Wucher. Volz Brothers are operating the blacksmith shop and are also handling a line of farm machinery.

In 1912 the Appleton bank was organized with a capital stock of $10,000. The first board of directors were the following: A.W. Boeller, president; Dr. W.A. Schoen, vice president; J.H. Kiesler, H.W. Schoults and William L. Schnurbusch Sr. E.H. Eggers was made the first cashier and is in that position now.

The present town board consists of the following: Theo. Meyer, L.M. Buchheit, H.C. Schaefer, William B. Wucher and G.A. Schaefer. W.C. Schaefer is chairman of the board and Theo. Meyer town marshal.

The town is located about as well as any town in the county, and for sport -- hunting, fishing and boat riding -- it is hard to beat; also for kodaking(!), it has some of the most beautiful scenery.

The Appleton Farmers' Club, of which most of the business men are also members, is holding its monthly meetings in the town hall here. The farmers of the surrounding country are nearly all members of this club and are a very progressive bunch of farmers. 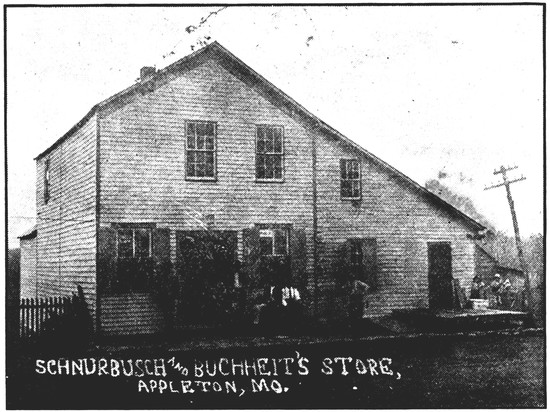 This firm, composed of two very aggressive young German-Americans, is the only one of its kind in the town of Appleton, and the two present owners have brought the time-honored place upon a modern basis, and have instilled into it up-to-date business methods. As a consequence they are reaping the benefit of their labors from the large volume of trade that is attracted to their store.

One is agreeably surprised to find such a large stock of seasonal goods, and such really live business men in a town the size of Appleton. The establishment would pass muster in a much larger town. The post office is also located in their building which is stuffed full of general merchandise to such a degree that the need of more room is being felt more every day.

Joseph F. Schnurbusch, the senior partner in this firm, was born in Perry County on Sept. 5, 1883, the son of William L. and Ositha (Welker) Schnurbusch Sr. Joseph first attended the parochial schools near his childhood home, working on the farm until at the age of 21 he secured a position as bookkeeper in the Appleton Brewery. Quitting that position, he worked in a drug store at Perryville and later became bartender at Longtown and in the Untereiner establishment at Uniontown. Dec. 8, 1908, he moved to Appleton, associated with him Mr. Buchheit, and bought the present business from John H. Schaefer on Feb. 9, 1909.

On the 4th of May, 1908, Mr. Schnurbusch was married to Helen E. Ponder, and they are the parents of three sons, Oscar, Herbert and Rudolph, and one daughter, Laura. The family occupies a spacious home near the store.

Mr. Schnurbusch is a Republican and as such was appointed postmaster, and handles the affairs of the office to the satisfaction of patrons and government officials alike. He also holds the office of a notary public. He and his family are members of the Catholic church, and worship at the St. Joseph's Catholic Church near Mr. Schnurbusch's old home in Perry County. The few leisure hours that Mr. Schnurbusch allows himself in the summer time are generally spent on the beautiful Apple Creek, with the fishing rod, at the handle of which he is considered quite an expert.

Like his partner in business, Mr. Schnurbusch, Mr. Buchheit was born in Perry County, the son of Joseph and Theresia (Meyer) Buchheit, his birthday being the 17th of March, 1886. His education young Buchheit received in the parochial and public schools of Perry County, after which he worked on his father's farm until 1908, when he entered into the above named partnership with Mr. Schnnurbusch.

During the following year his thought turned to things matrimonial, and he was married to Anna W. Ponder on the 18th of November, 1909. They have three sons, Herman, Herbert R. and Leander L., and one daughter, Olivia Theresa.

Mr. Buchheit is a Democrat and a Catholic; owns residence property and other real estate in Appleton, also stock in the Appleton Bank, as does his partner, and is a member of the Western Catholic Union. (He) also is owner of stock in the Perry County Prospecting and Manufacturing Company, a company recently organized to exploit the mineral wealth of the territory just across the line from Appleton in Perry County.

The congregation at Appleton, Mo., of German Methodist Episcopal Church was organized in 1848 by the Rev. Charles Hollmann. When the membership was increased to 16 an effort was made to build a church which was completed and dedicated in 1852, which stood on the original place till 1911, when it was removed and reconstructed for the purpose of a school house. Four years later there were 45 members, and it became a station with the Rev. H. Schultze as their pastor. Under his administration the first parsonage was built. There was a constant increase in the membership until it reached in 1867 106 in number. In 1892 the present brick building was erected at a cost of nearly $3,500 and 10 years later a new parsonage was built at the cost of about $1,200.

The Rev. Henry Idel, pastor of the church, was born Jan. 3, 1874, at Owensville, Gasconade County, Missouri. Immediately after his graduation, he was called to Huntsdale, Missouri, to take up a mission in behalf of the German M.E. Church. In September he was admitted on trial in the St. Louis German Conference by Bishop Walden and two years later was admitted to full membership. The Rev. Idel has served the following places since he entered the ministry: Huntsdale, two years; Hannibal, Missouri, one year; Bible Grove and Farina, Illinois, two years; Waltersburg, Missouri, three years, and is now at Appleton in his sixth year. His career is marked with success.