The photo below shows the Harris merchandise store, and what could be all the male residents of Daisy. 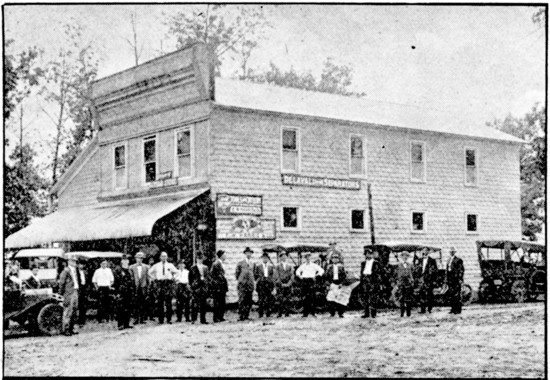 Every city and town has a central location around which ebbs the life of the municipality. Daisy also has that kind of a place, and that is Harris' store, located near the tracks of the Cape Girardeau Northern Railway. The proprietor of this business is the son of Oliver S. and Cora (Howard) Harris, and was born near Oak Ridge on the 9th day of April, 1872. He attended public school and then went to work as teacher, but quit that vocation after one year to go into the general merchandising business as an employee of a firm in Sedgewickville in Bollinger County. In 1900 he resigned that position, came to Daisy and established the present business.

A full line of merchandise is handled here, as well as farm implements and supplies of whatsoever nature. He also has charge of the wheat elevator that the Cape County Milling Company maintains in Daisy and buys wheat for that company.

When the Farmers' Bank was organized, he was one of the instigators of that move and now is a stockholder, director and assistant cashier. He was always a booster in every public enterprise that effects his home town. Twelve years he held the position of postmaster of Daisy, having been retained in that position by Republican administrations, while he himself is a strong democrat. He also holds the office of secretary of the Bell Mutual Telephone Company and has been instrumental in bringing about many improvements in the rural telephone system in and around Daisy. He was married Dona McLane on the 30th day of April, 1893, and they are the parents of one son and one daughter, Clarence P. and Mabel O. A neat and comfortable cottage, just across the railroad from the store is their home. The family are Methodists. The assembly room of the M.W.A. Lodge was located in the second story of the store building, but Mr. Harris, owing to prestige of more room, is occupying the entire building.

Personally Mr. Harris is of the affable and congenial kind that makes friends wherever he goes. While kind-hearted and generous in a great degree, he has that sense of distinguishing between worthy and unworthy subjects. He has helped numerous worthy and needy ones, and can be as hard as a stone when those that are unworthy apply for help. In his long years in business he has acquired a knowledge of human nature that comes in good stead when called upon to place confidence or charity.

In the business world of Daisy and community he is recognized as an authority in all matters pertaining to financial matters. In public affairs his advice is sought by his associates and in politics he is one of the leading Democrats in Apple Creek Township. In the 14 years that he has been in business in Daisy, he has become a factor in the general scheme of things, and, together with his estimable wife, is quite prominent in social affairs. Their home life is a beautiful one, and an example for other households. Being a member of one of the pioneer families of this county, which has given the state many useful citizens, Mr. Harris is a living example of the assertion that "blood will tell." In short, Mr. Harris is one of the foremost citizens of Daisy and the township, one who helped make the town what it is at the present day, and one that can always be depended upon to do his part in advancement and upbuilding of the town and community in every possible way.

When speaking of him as a man, it would be proper to mention his hobby, a thing that every man possesses. Mr. Harris' hobby is work, work, and more work. He is so wrapped up in his business that pleasure of any kind in the way as it is generally understood has little place in his life.

Tom B. Crites, prominent farmer and stock raiser of the Daisy neighborhood, and also one of the wealthiest men in that community, was born near Daisy on the 24th day of May, 1870, the son of David and Adelphia (Seabaugh) Crites. Public school was his only chance to get an education, but he made the best of it. Leaving school he worked with his father until 1890, when he and his father became partners in the operation of the farm. In 1896, at the death of the elder Crites, Tom took the farm over, and has been running the same since that time. In addition to operating the farm Mr. Crites buys and sells livestock and began that trade when very young, shipping 100 or more car loads per year, cattle, sheep and hogs. In 1914 he helped organize the Farmers' Bank at Daisy and became its president. On his fine farm he keeps on hand and makes a specialty of fine, blooded Hereford cattle, and has in this way done a great deal in improving the livestock in his community.

Mr. Crites was married to Mollie Linebarger on the 21st day of February, 1897, and has two daughters, Anna M. and Ella A. He is a Democrat, and a good one, is a member of the Modern Woodmen Lodge and a member of the school board.

The family lives in one of the most complete farm homes in the county, situated southwest of Daisy on 350 acres of the best farm land in that part of the county. Buildings and fencing and all equipments are up to date in every way, and the place is not only a place to live, but a real home. A fine auto is at the disposal of the family for recreation and is used also for making business trips through the country around.

Rounding off our Daisy material, I found a story publish in 1949 that gives more history of this Cape County community. It's accompanied by one of G.D. Fronabarger's fantastic aerials. 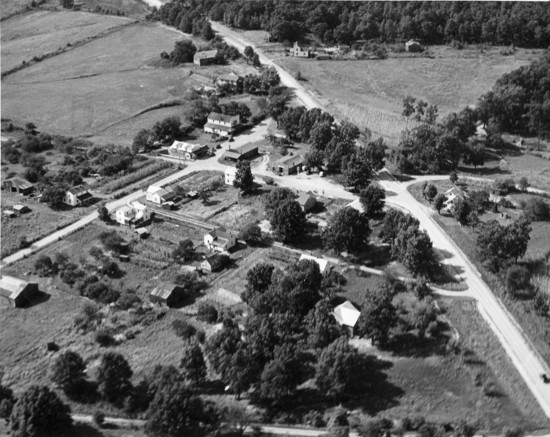 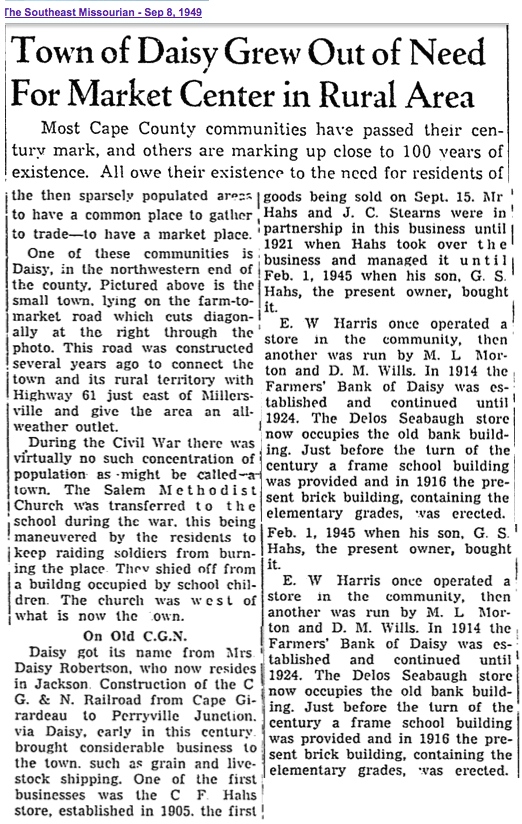