Once more delving into the 1915 "10th Anniversary Edition" of The Daily Republican, we've come to the beautiful town of Daisy.

The photos below show some of the homes in Daisy, as well as the depot for the Cape Girardeau Northern (Houck) Railroad and the public school. 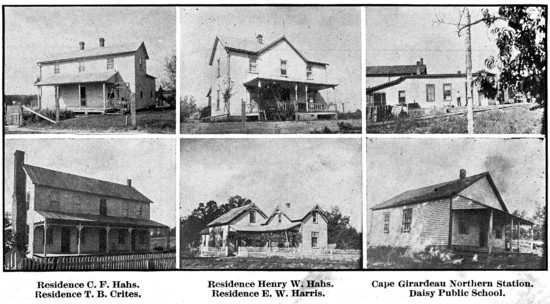 Daisy is beautifully situated on the Cape Girardeau Northern Railroad, on the uplands which separate the headwaters of Caney and Little Apple creeks. It is in the center of a densely populated neighborhood which was settled principally by emigrants from North Carolina.

The surrounding country is well adapted to farming, stock raising and fruit culture.

The town contains two general stores, two blacksmith shops, two churches, one good public school, one bank, and is an important shipping point for the northwest part of Cape County and the northeast part of Bollinger County.

Daisy is incorporated with the following officials: Henry W. Hahs, mayor; David Seabaugh, marshal; B.F. Seabaugh, secretary, and if the marshal is not present when needed old Squire Hahs takes his place and, of course, the boys have to go to the "cooler," though W.J. Smith calls it "the heater."

Visiting Daisy without seeing Squire Hahs would be a good deal like visiting Rome without seeing the pope. This old warhorse was born in Cape Girardeau County on the 19th day of February, 1841, the son of Daniel Hahs and Annie Mary Hahs. His elementary education was obtained in a so-called subscription school. Farming was his first vocation, and he continued in that until Dec. 27, 1911, when he retired.

Mr. Hahs has been honored repeatedly by being elected to public office. He held the office of justice of the peace for 40 years. Many years ago he was elected public administrator on the Republican ticket. On the 21st day of August, 1861, he enlisted in Company M, 5th Missouri Cavalry, and served until the 25th of March, 1865, when he was mustered out, the war having ended. He was a member of the Capt. James Johnson's Post, No. 350, G.A.R., at Arnsburg. In the town of Daisy he held the office of president of the town board. He tells with great pride how he cast his first vote on the battlefield, Nov. 1, 1864, for Abraham Lincoln, "the man that could think faster and see further than any president the United States ever had." Another favorite expression of his is, "I have always been a Republican and will die as one."

On the 5th day of March, 1874, he was married to Susan R. Leonard, and is the father of three sons, C.F., Theo. J. and Otto, and one daughter, Myrtle M. (Crites). Since his retirement Mr. Hahs occupies a nice home in the western part of the town of Daisy, where he spends his days in contentment and quiet, but still taking keen interest in all public affairs. In Daisy he is known as the "grand old man," whose advice is sought in all affairs pertaining to the welfare of the town.

Not quite one year old, this bank has made a remarkable showing in the few months of its existence. Its wealthy farmers and the well-to-do business men in and around Daisy felt that a bank in their midst would help a long-felt want, and so they proceeded to organize and capitalize a bank of their own and they are having great success with their enterprise. The officers and directors are men of integrity and business ability, and of more than ordinary intelligence. They are: T.B. Crites, president; R.M. Estes, vice president; B.F. Seabaugh, cashier; E.W. Harris, C.F. Hahs, R.A. Hahs, D.M. Wills and Marshall Wills, directors.

The efficient and genial cashier of this bank was born in Sedgewickville in Bollinger County on the 7th day of December, 1877, son of Joseph and Polly A. (Crites) Seabaugh. Finishing the public school, Frank attended the Marvin College in Fredericktown, and there finished his education. He then taught school in Cape Girardeau and Bollinger counties until 1914, when he was made cashier of the Farmers' Bank.

On Nov. 25, 1906, he married Minnie A. Cobble, and they have one daughter, Prudence O. They live in a comfortable house adjoining the bank. Mr. Seabaugh is a Republican and socially is a member of the M.W.A.

While yet a young man, Mr. Seabaugh has demonstrated that he is not only capable of managing successfully this small financial institution, but that he would be a safe man to put in a much more responsible position. In a small bank the cashier has practically charge of all the details of the business, and has to exercise a great deal more executive ability than the cashier of a larger institution who has the board of directors at his call at any time. But. Mr. Seabaugh has certainly made good in his position, as the success of the bank will fully substantiate that assertion.

While Daisy is not one of the largest towns in Cape Girardeau County, it has within its borders some of the most enterprising and up-to-date merchants in the county, among them being the proprietors of the firm mentioned above. In their large store-room they carry a full line of general merchandise, and they sell them, too. Nothing that could be possibly called for by their large country trade is missing in their store, which is always kept fresh and clean.

The general manager of this concern was born near daisy on the 12th day of February, 1875, the son of Henry W. and Rebecca (Leonard) Hahs. Young Hahs obtained his education in the public school near Daisy, and while still very young, turned to steam engineering -- his hobby. After becoming proficient in the trade, he became an employee of a Pennsylvania concern managed by J.B. Swan that made tests for lead ore in the Gravel Hill neighborhood, and operated a steam engine for that company until they concluded their prospecting in that vicinity.

In 1905 he and J.C. Stearns of Millersville opened the present business, and Mr. Stearns remained only one year, then spent five years in Oklahoma, then returned to Millersville, still retaining a half interest in the business, but turning the management over to his partner, Mr. Hahs.

Mr. Hahs was appointed postmaster of Daisy in April, 1914, under Democratic government, this being a distinction, as he is and has always been a staunch Republican. He owns stock in the Farmers' Bank of Daisy, and is one of the directors.

While in Marble Hill drilling the courthouse well, he was known as the "good-natured well driller," who never grew tired of answering foolish questions concerning his work. He is a natural mechanic, and has built several steam engines with his own hands. He is the handy man around Daisy when an auto balks or acts unruly.

On Oct. 6, 1901, he was married to Iva D. Ates, and they are the parents of three sweet children, two sons, Gifford S. And Kenneth Carleton, and one daughter, Opal Lucille.

Large of body and mind, Mr. Hahs is the personification of good nature and a whole-sole fellow in his intercourse with his fellowmen.