We paused in our study of the articles related to Gordonville in The Daily Republican's 10th anniversary edition for a Christmas blog.

This installment finishes off those Gordonville stories with items about the Bangert General Store and the Bank of Gordonville. 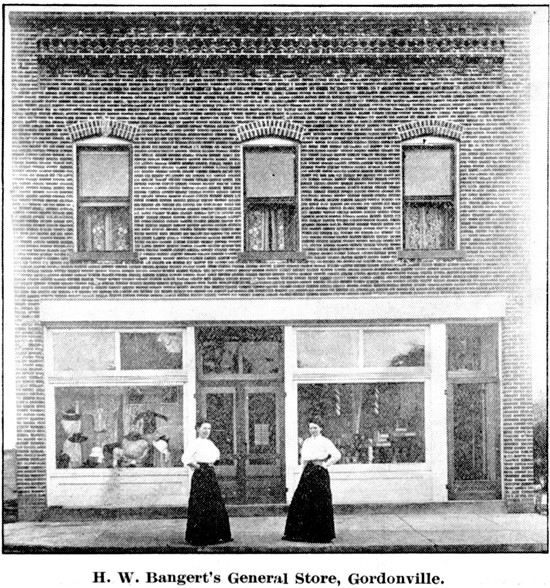 Mr. Bangert owns and conducts one of the nicest and best-kept general stores in the county and has, from a small beginning, built up a trade that is only procured by strict honesty and application to business. In his large brick building is piled up an assortment of seasonable goods that are seldom found in such variety in an establishment of this kind in the smaller towns. The trade in and around Gordonville demands more than the ordinary necessities of life, but Mr. Bangert has that knack and business sense that always leads him to purchase just the goods that are wanted by his customers. Hence his success.

He was born on Feb. 7, 1874, in Bollinger County, the son of William and Mathilda (Kester) Bangert. He attended successively the parochial school, the public school and the Normal, and supplemented what education he received by study and by reading until he became proficient in all branches that are necessary for business life. During his early life, he worked for his step-father on the farm, but at the age of 21 he began to work in the mercantile business in Gordonville. In 1895 he bought property, and in 1911 erected the present fine building, with large store rooms on the first floor and handsome flats on the second.

In public life Mr. Bangert holds the office of Justice of the Peace of Hubble Township and that of treasurer of the town board, also he has held the office of Notary Public for 16 years. He holds stock in the Bank of Gordonville and in the Gordonville Telephone Company.

He and his estimable wife, who was formerly Miss Clara Schmidt, were married on the 24th day of October, 1895, and they have one daughter, Alma L. In politics Mr. Bangert is a staunch Republican and was elected as Justice of the Peace on that ticket.

Mrs. Bangert is in a large measure responsible for the success of the business. She is truly Mr. Bangert's helpmeet in all business affairs and makes a home for the family that any man might be proud of. She is an indefatigable worker, attending to the duties of the household as well as acting as saleslady in the store.

In short, Bangert's place is one that the Gordonville visitor can ill afford to miss, whether he come on business or otherwise. It is one of the best places in town to stop at. 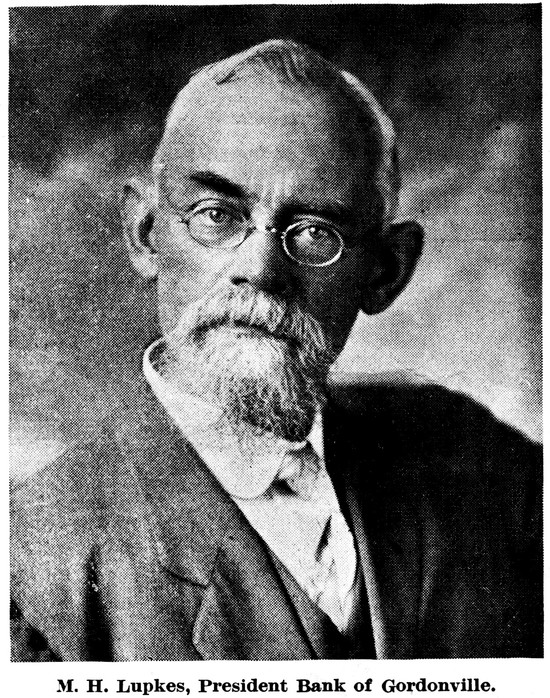 THE BANK OF GORDONVILLE

The fact that for 10 years this bank has rendered the people of Gordonville and vicinity service which meets every banking need in the most satisfactory manner, and that it has at all times afforded absolute safety for every dollar entrusted to it, recommends it as a most desirable depository. Every courtesy and accommodation in keeping with sound banking methods is extended to each patron of the Bank of Gordonville. All are invited to make this their banking house, and to let the officials assist them in their banking and financial transactions.

The institution enjoys an enviable reputation among the banks in Southern Missouri for conservatism in its management and the financial standing of its directors and stockholders. The management has endeavored to keep pace with the growth of the town and the needs of the community, and as a result its patrons enjoy banking facilities equal in most respects to those extended by the banking institutions of the larger cities. Accounts are carried with St. Louis banks, thus affording its customers exchange which will go at par throughout the world. 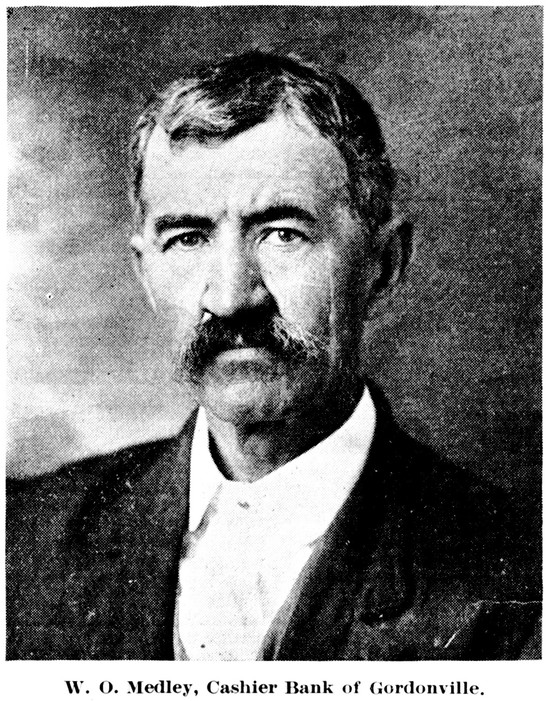 W.O. Medley, the cashier of the Bank of Gordonville, was born on a farm near Jackson, on Nov. 8, 1859, the son of Joseph F. and Mary A. (Penny) Medley. He was educated in the public schools and in St. Vincent College at Cape Girardeau. While yet a very young man, he began to teach school and followed that profession for eight years. Quitting the schoolroom, he became a farmer in 1883, but during the year 1895 took employment as bookkeeper in the Gordonville Roller Mills, and when this firm was incorporated, was made its secretary-treasurer.

In 1904 he helped organize the Bank of Gordonville, and became its president. This position he held for two years, together with that of secretary-treasurer of the roller mills, but in 1912 sold out his interest in the mill and took the position of cashier of the Bank of Gordonville, a position that he has filled so far with honor to himself and to the benefit of the bank. He owns a farm of 160 acres, residence property in Gordonville, has a motor car and is up to date in every way.

On the 30th of September, 1883, he was married to Cora C. Priest. They have two daughters, Clara Addie M. and Hattie Marie.

Mr. Medley is one of the most zealous Democrats in the county, and has been honored with public office, serving two terms as clerk of the town board and as school director two terms. In the bank he has charge of practically all the business transactions and a good deal of the management is left to him. He owns stock in he bank and is one of the directors. He also owns stock in the Whitewater Mercantile Company and is the vice president of that concern. He and his family are all devout Methodists, and the Medleys are rated among the foremost citizens of the county.

The cashier of a bank in a small town represents a peculiar type, and fills a peculiar place. He is not simply the machine that keeps the books, takes the deposits and pays out the money on good paper having nothing or little to do with the handling of the funds when loans are made, as is the case in larger institutions, where higher officials of the bank are always on hand to pass on these matters. In these smaller places the cashier is the whole system, he is supposed to know the standing of every person that appears at his window to transact business. It is he who is held responsible if bad small loans are made. It is he that, with his business tact and with his personality is expected to build up the business of the bank and to increase the number of its customers. It is he that represents the officials of the bank in the dealings with depositors. He is supposed to keep the bank building and its surroundings attractive and neat. His very actions in his everyday life are watched with argus eyes by the public, his every associate is carefully scrutinized by the patrons of the bank. While in larger banks in the cities, the functions of the cashier are merely the carrying out of orders, the duties of a cashier of smaller institutions become in a large measure administrative. In short, the cashier of such a bank is practically the whole board of directors and the general manager thereof. And Mr. Medley is all this in a remarkable degree. He is far-sighted enough to distinguish between hazardous and safe risks, ready at all times to accommodate anyone just so far as is consistent with conservative banking methods.