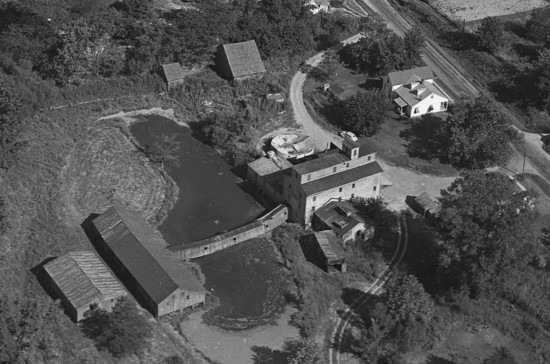 (This aerial showing the roller mill at Gordonville was taken by G.D. Fronabarger in 1949.)

Last week's blog, a re-printing of an article from The Daily Republican's 10th Anniversary Edition, introduced us to the hustling town of Gordonville. We know continue that theme with a lengthy article about the Gordonville Roller Mills.

A most important industry, practically the life nerve of Gordonville, is the plant of the Gordonville Roller Mills, and a most complete and perfectly equipped plant it is. Noting in he way of really practical milling machinery that can be had in this country is missing in these mills. The history of the mill is closely identified with Cape Girardeau County. One of the first settlers, a Mr. Hubble, built a small watermill at the spot where the large plant of the Gordonville Roller Mills now stands. The creek that furnished the motive power was named after the owner of the first mill, and is known today as Hubble Creek. Many were the owners that followed Hubble in possession of the mill, until William Winkler, father of one of the present owners, came in possession of the plant in 1876. The buildings were enlarged from time to time, and remodeled several times. Mr. Winkler Sr., retired in 1888, and M.H. Lupkes became a partner of William Winkler Jr., who continued the business until the present day. A large steel grain elevator was added to the equipment, and steam is used as power. The plant that furnishes light for the city is connected with the milling plant, also.

The officers of the company are: President, William Winkler; vice president, M.H. Lupkes; secretary-treasurer, F.H. Rasche. Excellent flour is produced here and the leading brands are: "Our Special," "Leader," "High Patent" and "Superior Patent." Great quantities of feed and corn meal are manufactured and they as well as the flour find a ready market in this state, Arkansas, Georgia, and other states in the Southeast. The capacity of the plant is about 200 barrels per day. Wheat is always bought at the highest market price. They also handle limestone, rock phosphate and other fertilizers and do that more to assist the farmers than for profit.

The president of the Gordonville Roller Mills was born April 14, 1859, near Baltimore in Maryland, the son of William and Dorothea (Meisner) Winkler. In 1876 he came to Gordonville with his parents from Madison, Indiana, where he attended public school and business college. Young Winkler soon made himself useful in his father's mill and learned the miller's trade in all its intricacies. He made this his life work until the present time and is an expert at the trade.

He became well to do and moderately wealthy when yet a young man and has now reached that place in life where he can take things easy and enjoy himself. When the Cape County Savings Bank in Jackson was organized, he purchased some of the stock and in 1904 helped organize the Bank of Gordonville and is one of the directors thereof. He owns a magnificent brick residence in Gordonville and some valuable farm land. Driving his motor car or a good horse is his hobby.

He has been thrice married and is the father of one son, William Jr., and three daughters, Anna D. (Rasche), Cora A. and Esther C. He first married Mary Wuensch, then Emma Ehlebe, and his present wife was Miss Mary Stoffregen. The family belongs to the Methodist church near Gordonville. Mr. Winkler is a Republican, and has held office, having served two terms as mayor of Gordonville and as clerk of the board.

Mr. Lupkes was born in Wirdun, East Friesland, formerly kingdom of Hanover, in Germany, on March 10, 1857, the son of Habbe and Hinderika (Smidt) Lupkes. After procuring the elementary education in the parochial school, he attended the school for millers in Worms on the Rhein. On the 26th day of September, 1882, he landed on the shores of the United States, first having worked at his trade in the following cities in the fatherland: Pewsum, Jennelt, Emden, Leer, Ahlfeld, and Weilburg-der-Lahn, all in Germany, and in Bottinhofen in Switzerland. In this country he found work as a miller in Pekin and Cave-in-Rock, Illinois, and from there came to Gordonville on Dec. 13, 1883, beginning work as miller in the plant of which he is now one of the owners. He was married to Henriette Winkler on the 31st day of August, 1884, and they have three daughters, Hinderika Dorothea (Spradling), Celia Inka and Inka Anna. The family lives in a large, comfortable home of their own in Gordonville and are members of the German Methodist church. Mr. Lupkes votes the Republican ticket, and is a member of the Knights and Ladies of Security lodge. He served his home town as mayor several terms and as member of the town board. He is president and director of the Bank of Gordonville, vice president of the Gordonville Roller Mills and vice president of the Gordonville Telephone Company, and one of the most valuable citizens of Cape Girardeau County.

In Fred H. Rasche the Gordonville Roller Mills have a most efficient official. He believes in applying modern methods in business and is progressive in every way. He was born on a farm near Gordonville on the 20th day of November, 1887, and is the son of Henry F. and Lydia (Deneke) Rasche. His intelligent father insisted that Fred get a thorough education, and after quitting the public school the young Rasche attended the Cape Girardeau Normal and finished in the Gem City Business College in Quincy, Illinois. He then took the position of bookkeeper with the Byrd Cattle Syndicate at Carrizo Springs, Texas, but returned to Cape County and was installed as bookkeeper and secretary-treasurer of the Gordonville Roller Mills. He believed in modern methods in farming, and is the secretary of the Gordonville Farmers' Club and the Commercial Club. Politically he affiliates with the Republican party and in religion he subscribes to the Methodist faith.

Physically Mr. Rasche is as nearly perfect as can be found in the county, and he was formerly, while in school and college, a participant in all athletic doings.

He and his wife, Anna Dorothea (Winkler), were married on the 24th day of November, 1910, and they live in a comfortable home in Gordonville. He is considered by all as one of the foremost citizens of the town, and a real live wire.

"Father Stein" was born in Bockenem in the Province of Hanover, Germany, the son of Christian Stein and Maria (Rath) Stein, on May 21, 1825, and came to America in 1854, landing at New Orleans, where he remained about one year and came to Cape Girardeau, where he worked at his trade, that of miller, about five years, and removed to Commerce and remained three years, after which he moved back to Cape Girardeau and made that city his home until 1892, when he moved to Gordonville.

In 1851 Mr. Stein was married to Catherine Maertens and four sons and one daughter blessed this union. The sons, Gustav, Christian, Louis and Fred, are all useful citizens, while the daughter, who married G.F. Siemers, died several years ago.

Several years after the death of his first wife, the subject of this sketch married Mrs. Catherine Rahmueller (Nee Litzelfelner) on the 26th day of November, 1905, and the two aged people, who live as happily together as any pair can, are known as the "youngest old couple in Cape Girardeau County." Mr. Stein is very active for a man of his age, and it is nothing unusual for him to walk four or five miles, and think nothing of it. He votes the Republican ticket, is a member of the Lutheran church, and owns his home in Gordonville, where the happy pair lives, respected and loved by all citizens alike. 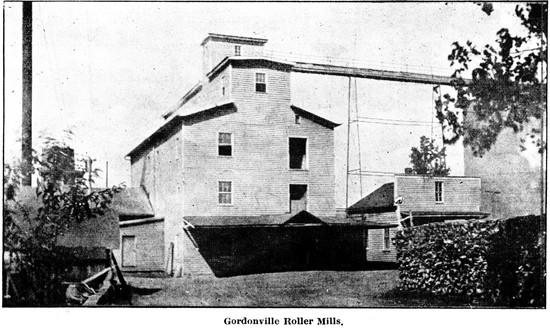