In the German language, Friedheim means "Home of Peace." That seems appropriate for this small town in Northwest Cape Girardeau County.

German settlers came to the area in the 1840s fleeing political unrest, according to one historian. Most of the early settlers were Lutheran, and they built their own, log church in Friedheim in 1849. That was replaced by the current stone church in 1857.

The Daily Republican's 10th Anniversary Edition doesn't provide much background on the town, but it does profile several of the businesses that called Friedheim home. 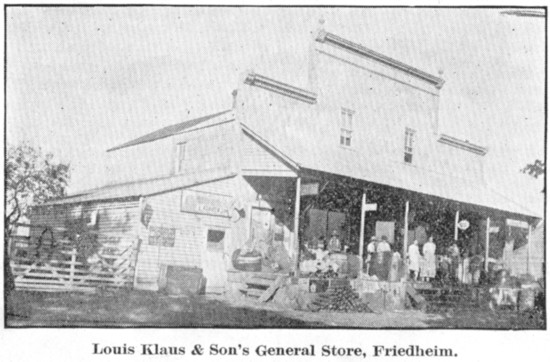 Away up in the northwestern corner of Cape Girardeau County lies the placid village of Friedheim. "Home of Peace is the meaning of the German word Friedheim, and the village is all the nae implies. Peacefully and tranquilly do the farmers and townspeople live together in a happy community, enjoying the fruit of their labors in peace and contentment. The center of the community is, as is usual in small country towns, the post office, located in the store of the firm of Louis Klaus & Son. This firm has long been and is yet doing a large business in the general merchandise line, buying all kinds of country produce and offering to their customers seasonal goods at reasonable prices. The Klauses, father and son, are known to be men of unquestioned integrity and ethical in their methods of doing business. These traits never fail to prove remunerative to men in business, and therefore the firm is enjoying a liberal patronage from the farmer folks around the village for miles.

Mr. Klaus, the senior member of the firm, was born in Friedheim on the 27th day of March, 1849, his parents being Caspar and Katherine (Wehmueller) Klaus. The Lutheran parochial school and the public school were his only chance to get an education, and he took advantage of all the opportunities that it presented. His first wife was Bertha Dickman, and his second is Friedericke Oehl. He is the father of 15 children -- four sons, William, Edward, Walther and Alvin, and 11 daughters, Pauline, Julia, Laura, Jessie, Louisa, Rosa, Ida, Lorina, Estella, Addie and Frieda. Mr. Klaus and his family are members of the Lutheran Church. They live in a spacious farm home near Friedheim. From his boyhood until he was 22 years old, Louis Klaus worked for his father, then purchased a farm, and became an agriculturist on his own account. In 1891 he bought the present business from William Sewing and in 1911 took in his son as partner, and since that the firm is known as Louis Klaus & Son. He was appointed postmaster of Friedheim in 1891, and still holds that position. Besides his store, the farm and the post office, he owns and operates, together with his son, a threshing outfit and sawing rig, he buys and ships livestock, and has a depot for the Cape Girardeau Brewery, selling beer by the wholesale. He owns a farm of 300 acres, and on it he maintains his home.

The junior member of this firm was born near Friedheim on Aug. 13, 1873. He began his education in the parochial school, followed that up with public school, Oak Ridge high school and finished in the Bryant-Stratton Business College in St. Louis.

Mr. Klaus, Jr., is married, his wife being formerly Miss Bertha C. Moeller, and they are the parents of six children -- four sons, Edgar, Oscar, Norbert and Arthur, and two daughters, Lydia and Alma. They live in a splendid new house in Friedheim and are members of the Lutheran church.

Like his father, William H. Klaus is very quiet in his manner, but a student of human nature, and possesses all the qualifications that go to make a perfect business man. He is a Republican, and, although quite prominent in politics, has never asked for any office. 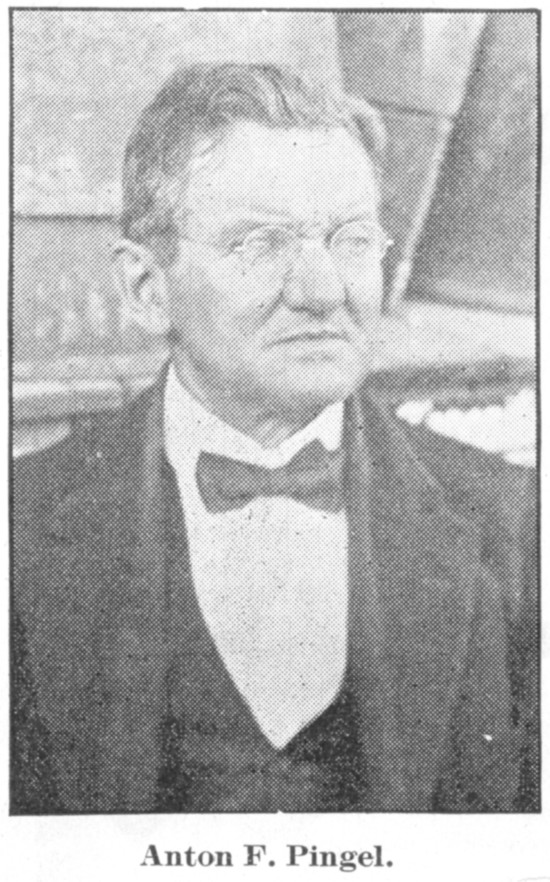 In the spacious building formerly owned by Mr. Miller, and in which Mr. Mueller so long conducted a general mercantile business, now is the large business of the Friedheim Mercantile Company. This firm sells everything that can be expected to be offered in an establishment of this kind. They make a specialty of farm supplies of all kinds, doing business strictly on a cash basis. They sell goods for cash and buy produce for cash, if cash is desired. They carry a large stock at all times and get a goodly share of the patronage of the Friedheim community.

The general manager of this concern was born on Nov. 14, 1856, in Perry County, the son of Anton and Theresia (Wiedebusch) Pingel. His education was obtained in the Catholic parochial school at Biehle. He began his career in life as a blacksmith in Biehle, later added the trade of wagonmaker, but finally branched out in the general merchandising business at the same place, and was appointed postmaster. In 1909 he sold out and went to St. Leburius, St. Clair County, Illinois, where he conducted a store and blacksmith shop until 1912, when he returned to Perry County and was made manager of the Perry Manufacturing Company at Perryville. During the year 1914, in March, he took the position as general manager of the present business.

He was married to Theresia Baudendistel on Jan. 13, 1878, and is the father of seven children. They are Ludwig L., Anton A., Herman E., Catherine (Ruch), Josephine (Zoeller), Ida and Maria C. The family lives at Perryville. Mr. Pingel and his family worship in the Catholic church. Politically, Mr. Pingel adheres to the Democratic faith and conscientiously votes that ticket. 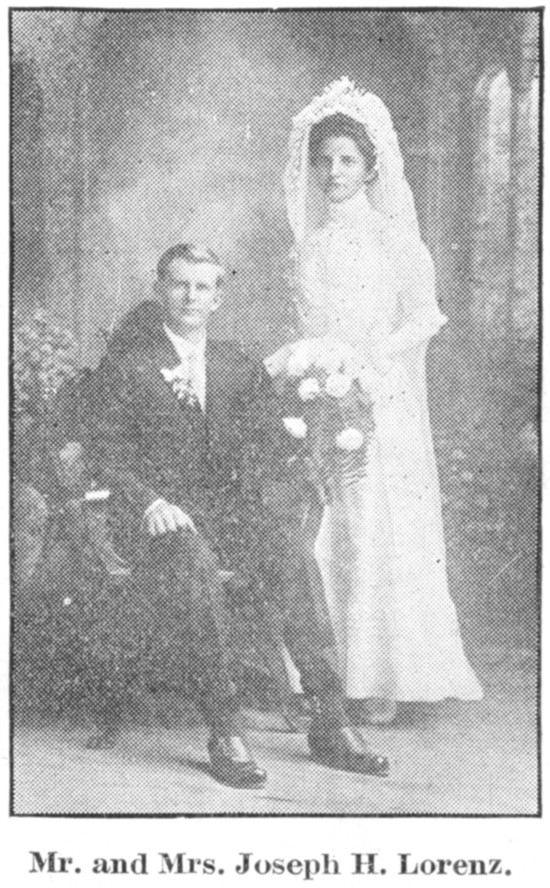 One of the rising young men in the quaint little village of Friedheim is the village harness maker, shoe repairer, and Ford agent, Joseph H. Lorenz. He is a native of Perry County and is the son of Emanuel and Martha (Soehl) Lorenz of Farrar. He was born on the 18th day of January, 1889, attended the parochial and public schools near his home, and started out in life while yet a very young man. First he worked at the carpenter's trade, but came to Friedheim in 1911 and established the business which he has now succeeded in building up to a remarkable degree. He is one of the live wires that are always on the lookout for improvements and betterments, not only in business but in public affairs as well.

He was married to Frieda Bachmann on the 22d day of June, 1913, and one daughter graces their home. Little Miss Irma is the pet of the household. The family are Lutherans, and Mr. Lorenz is a member of the Democratic party from principle.

The young man is ambitious, and in every way progressive. His establishment shows that he does not intend to do business in any slip-shod manner, but that he means to apply modern methods in the running of the same. His ideas about conducting public affairs are based on sound judgment, and, were he a citizen of a larger city, he would become a power in municipal affairs. He is a self-made man in the truest sense of the word, but he has only begun to carve out his position in the business world. Greater things can be expected of him.

His business is not confined to repair work; he manufactures harness of a superior grade. His adding an agency for a well-known auto-building firm to his business, has made his place a center for the auto owners and prospective buyers in the northwest end of the county. 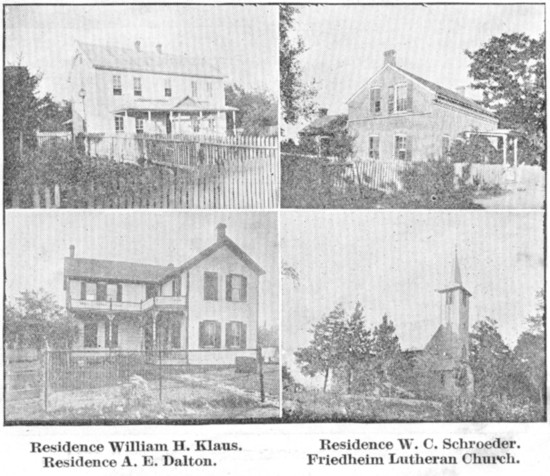