'Peanuts' a part of Missourian readers' lives for 50 years

Charlie Brown -- Chuck, to friend Peppermint Patty -- ambled onto the pages of the Southeast Missourian on Sept. 27, 1965. The youngster must have already been familiar to Missourian readers, though. He and most of his "Peanuts" gang had debuted in other newspapers in 1950, distributed by United Feature Syndicate in New York.

The creation of Charles M. Schultz, Charlie Brown originally shared space in his four-panel strips with Shermy, Patty (not to be confused with Peppermint Patty), and of course Snoopy. By 1965, the "Peanuts" gang had grown to include Sally and her brother Linus, Pig-Pen, Frieda, Schroeder, Violet and Charlie's sister Sally. The Missourian played up its new addition to the funny pages, introducing each character with front-page stories in the days before the premier.

The artwork has changed a little over the years, but Schultz's creations are immediately recognizable. Schultz died in 2000, but "Peanuts" continues to entertain Missourian readers with the publication of reruns. And fans can look forward to a computer-animated feature film, "The Peanuts Movie," coming to theaters in November.

Below are the articles the Missourian printed in September 1965 introducing the "Peanuts" characters.

He's one of the leading characters in that fun-filled comic strip, PEANUTS, which will start in The Missourian Monday, Sept. 27.

Charlie is an inveterate worrier, frets over trifles. And he's convinced that nobody likes him, most of all, he wants to be recognized by the other kids. So he's extremely friendly and polite, which doesn't often help. But he's a lovable little fellow and you'll be good friends. 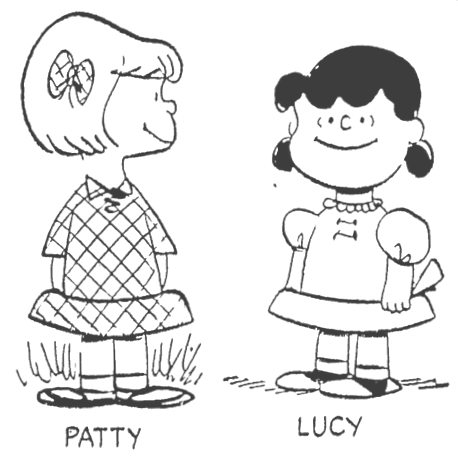 Lucy is a three-time winner of the little, "World's No. 1 Fuss-Budget." She's a loud mouth, carping critic whose lack of logic -- a kind of shining lunacy -- drives her friends nuts. Yes, Lucy is the know-it-all of the little people who have made PEANUTS one of America's funniest newspaper comics.

Patty is Lucy's sidekick and a thorn in Charlie Brown's side, for Charles becomes rankled when he feels Patty is talking about him but is just as annoyed when she isn't. She's a gal who generates giggles in PEANUTS, the distinctive commic strip to appear in The Missourian starting Monday. 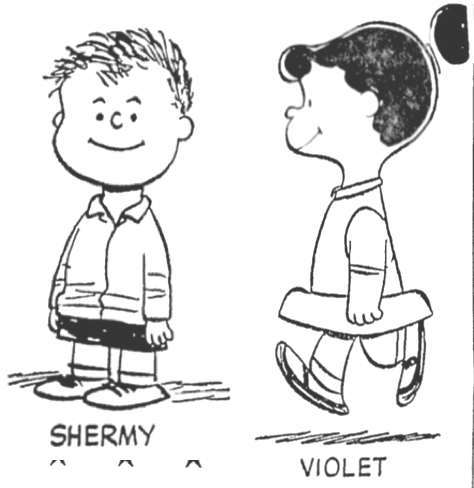 Violet and Shermy on the Way

Violet is a sprightly little girl who looks -- and sometimes acts -- as if she's carrying a world of knowledge in her head. Sadly, yet with a warm feeling of superiority, she looks upon Charlie Brown as a hopeless case.

Somebody's go to play the "straight man" and Shermy plays the role to the hilt. He's the other half of the "one-two" combination which, with Charlie Brown, produces gems of wisdom in PEANUTS, that inimitable comic strip (that will) appear in the Missourian starting Monday. 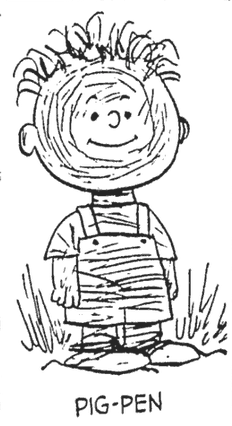 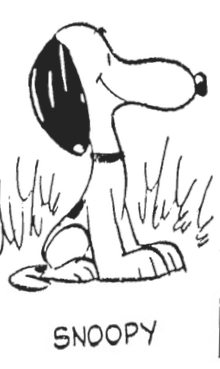 Pig-Pen is the dirty one -- soiled, happy, indifferent -- who believes that a guy can be dirty and still have clean thoughts. He blames his dirtiness on his environment yet is secretly proud of it as a mark of distinction.

Snoopy is a dog who wants to be a human being, or a ferocious lion, an alligator or a snake. He's a kind of a canine Walter Mitty. But most of the time his limitations come a cropper, giving hearty chuckles to fans of PEANUTS, the sensation of modern comic strips which will appear starting Monday in The Missourian. 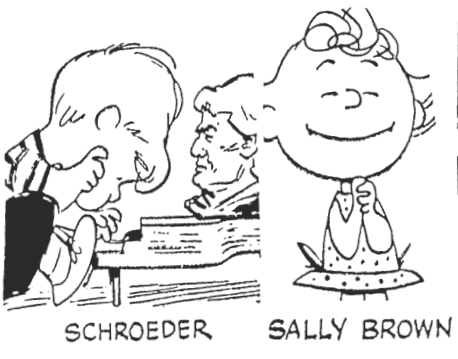 Schroeder is a lover of classical music, firmly believing that Beethoven was the greatest man who ever lived. He is a pianist, a save to his art as he tortures Beethoven out of his tiny instrument. Schroeder, one of a generation ahead of its time, is the butt of many a joke in PEANUTS, a comic strip which will start Monday in The Missourian.

Sally is Charlie Brown's baby sister, and probably the only girl in the world with a brother so pleased and proud that he passed out chocolate cigars when she was born. She's the youngest of the delightfully amusing little folk in PEANUTS. 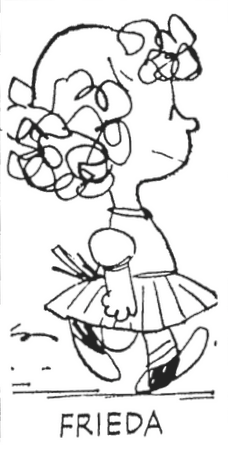 Linus, Frieda Say Hi to You

Linus is Lucy's younger brother who finds security in sucking his thumb and holding a blanket against his face. He craves independence, only to be utterly baffled when he finds it. And his occasional flashes of competence bring added laughs to PEANUTS>

Frieda has naturally curly hair and prides herself on being a good conversationalist. She sits behind Linus in school, so he hasn't heard a thing the teacher has said during the past term. The two will be seen starting Monday in The Missourian's new comic strip.