In an earlier blog, I brought you stories about the town of Pocahontas and a couple of its businesses. 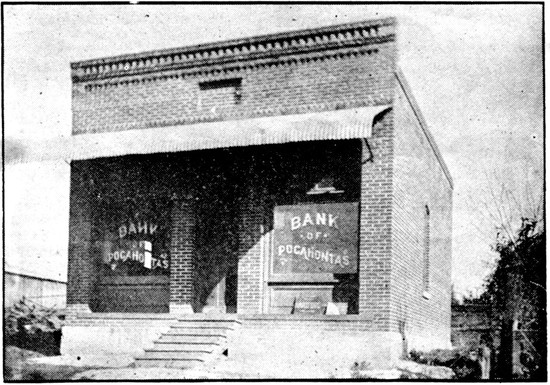 This small but solid financial institution is young in years, but has become a most lusty youngster in the four years of its existence. Established in 1910 with a capital stock of $10,000, its financial statement now compares favorably with any of the older establishments of its kind in Cape Girardeau County. The farmers of the community that felt the necessity of a bank in their midst, hold most of the stock, and, with the help of a few business men of the town, have made the bank yield handsome dividends. John Bonney, the veteran financier of Pocahontas, has been made its president, while Postmaster D.C. Thompson serves as vice president. E.G. Schoen has been, since the establishment of the bank, and is yet, its cashier. The above named gentlemen are also directors, the other two in the directorate being A.H. Hope and J.M. Thompson, farmers. A great deal of the success of the bank is due to the enterprising cashier of the same, and the honorable board of directors to assist him. 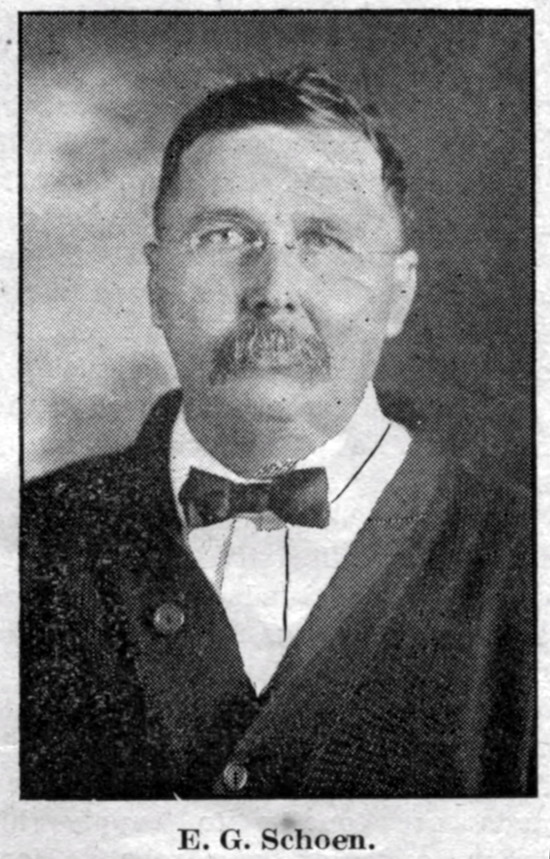 Mr. Schoen has worked his way up from a farmer's boy to the responsible position he now occupies by his strict attention to business, and by accuracy and integrity in all business affairs. He was born on the 30th day of January, 1870, as the son of Gustav A. and Mrs. Anna (Lehner) Schoen. The parochial school and public school were the educational institutions he attended, and farm work his first occupation. After quitting the farm he became a clerk in the Oak Ridge mercantile establishment, where he served his employers faithfully for two years. His father had meanwhile acquired an interest and later the proprietorship of a general store in Pocahontas, and E.G. was transferred to that establishment, still in the capacity of a salesman. At the death of the elder Schoen, the two brothers, F.J. and E.G. Schoen, took the business over and conducted the same under the firm name of F.J. Schoen & Brother from 1898 to 1910, when the subject of this sketch sold his interest to his senior partner, to take up his duties as cashier of the Bank of Pocahontas, which he helped organize.

On the 17th day of September, 1893, he was married to Marie Haberfelmer. Six children grace their household, two sons and four daughters. They are: Richard W., Gilbert H., Alma R. Esther D., Erna and Vera C. The family are members of the Lutheran St. John's church in Pocahontas, and a fine home on Green Street is their residence. They find their recreation in driving their motor car, which is a good one.

Mr. Schoen has served as member of the village board for eight years and held other official positions in the village government. 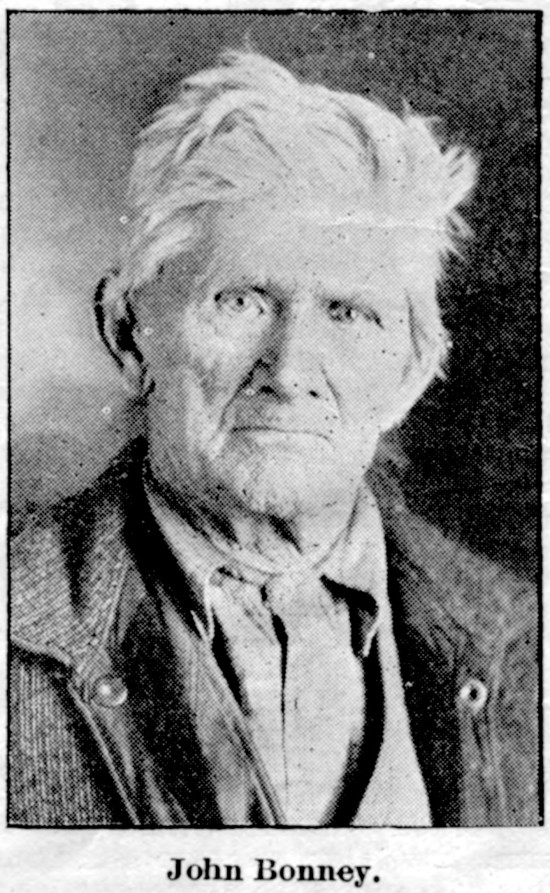 This old and respected citizen of Pocahontas was born in Walton, Norfolkshire, England, on April 17, 1826, and came to this country with his parents, John and Sarah Bonney, in July, 1838. He received his education in the public schools of Wisbich and other places in England. He became a merchant in 1863, opening a small store at Pocahontas and was later elected county treasurer and public administrator, and has been justice of the peace or notary public or both ever since. In 1847, on the 7th of October, he was married to Mary E. Starrett, and to this union were born the following children: Sarah J., William A., John F. and Margaret E. After the death of his first wife he married Sarah Whittaker on the 22nd day of October, 1878, but this union remained childless. Mr. Bonney has been a member of the Wilson Lodge, A.F. and A.M., at Pocahontas over 40 years, seldom misses a meeting of this lodge, and during one of the nights after lodge had adjourned yeggmen burglarized his safe and escaped with $750. Politically Mr. Bonney has always been a Republican and still upholds the principles of this party.

When his father died in 1838, the subject of this sketch was the oldest son of the family, and had quite a hard time for several years. He likes to talk about these days when he hauled logs to the river, driving two and sometimes three yokes of oxen. The logs were than rafted to Cape Girardeau. The oxen roamed in the woods during the night, and when getting up in the morning for work, young Bonney would get covered with "seed ticks," which he would kill with tobacco smoke.

After the family grew up, however, John Bonney started out for himself, and following his election to the office of justice of the peace, began to get along better, and has now accumulated considerable property. He has been president of the Bank of Pocahontas since its organization.

The Bowman Milling Company at Pocahontas now owns and operates the time-honored and well-known plant that is as old as this town itself. Just who built and first operated the mill and when and what year the beginning of this business should be dated, seems to be a matter of conjecture. The present generation only know that the mill has always been here, and let it go at that. But the mill and its machinery have undergone many changes and improvements in the time since its establishment. From a small bur mill it has developed into a modern roller mill, with the latest improved flour-making machines, and turns out a grade of flour that holds its own with any on the market. About 18,000 bushels of wheat are annual converted into flour and its by-products. The capacity of the mill is 100 barrels of flour per day. The brands of flour are: Indian Princess, patent; Legal Tender, family; and North Star. Wheat is bought for cash, and exchange is one of the special features. 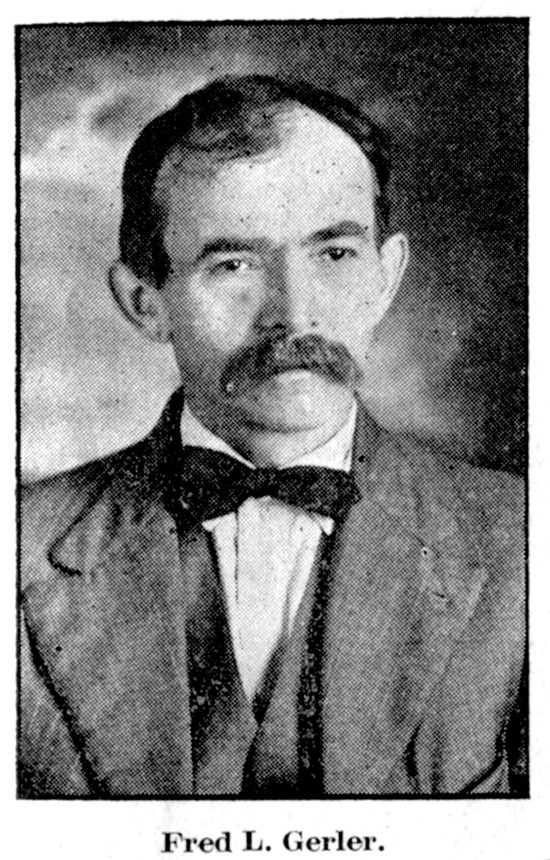 The head miller and general manager of the Bowman Milling Company, Fred L. Gerler, is a native of Perry County, and was born April 14, 1873, as the son of Frederick and Lena (Lindner) Gerler. After completing his education in the parochial and public schools, he began to work as engineer with a threshing and sawmill outfit. Later he attended a dairy school in the northwest, and, returning to Missouri, took charge of the Pocahontas Creamery, which he conducted four years. In 1898 he began to work for S.S. Bowman, who at that time had the mill rented, of which he is now the leading spirit. He began ans engineer, but later bought an interest in the business and was made general manager.

His wife was formerly Miss Bertha R.J. Lehner, and they were married on September 13, 1896. Four children have blessed the union, one son, Edgar Theobald and three daughters, Hilda, Elsa and Melva.

The family lives in the outskirts of the town on a 65-acre farm, and have a comfortable home. All belong to the Lutheran Zion church. Mr. Gerler is a Republican, and has served his home town as collector two years, and as member of the town board two years. He is one of these everyday, working fellows, who does not care for society nor style in any way, but combines Yankee shrewdness with good, common horse sense, and in that way, together with hard work, has made his way up from obscurity to the position of one of the leading business men in Pocahontas. 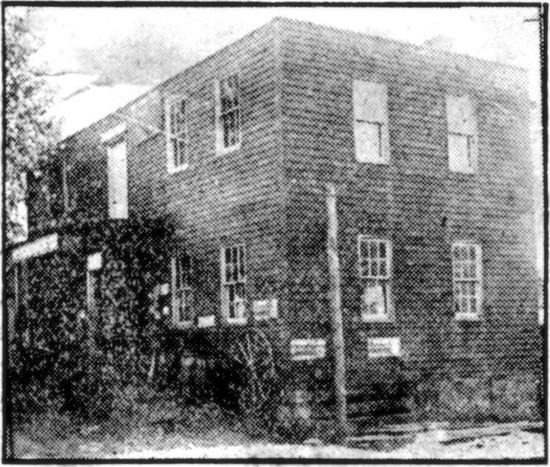 This firm makes a specialty of hand-made farm wagons, and a reputation for stability and good workmanship. The shop turns out complete wagons, and manufactures nearly all the parts right in the shop. General blacksmithing and repair work is also done here in the most approved style, also horseshoeing. The shop is equipped with gasoline motors for the heavy work, and is complete in every detail. 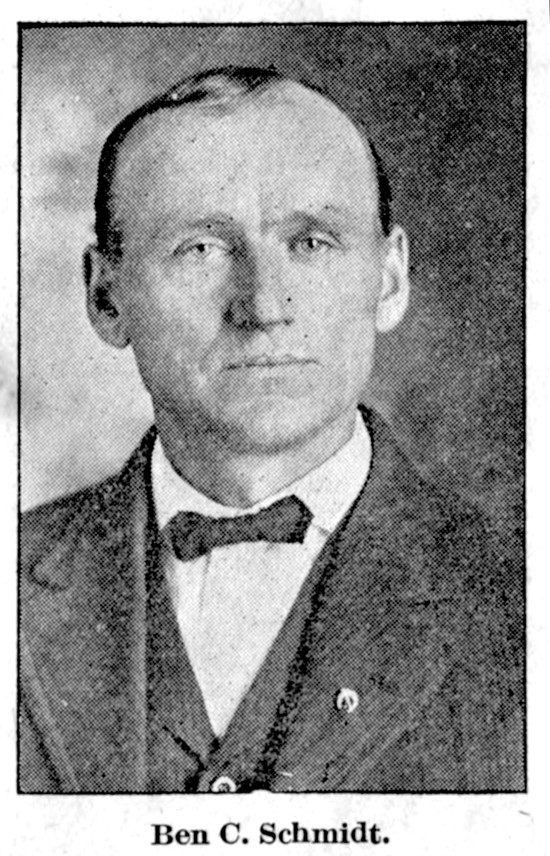 Ben C. Schmidt, the proprietor of this business, is a native of Perry County, where he was born on February 11, 1872, his parents being Henry J. and Wilhelmina (Naeser) Schmidt. Parochial and public school teachers were his tutors, and Ben began to work as a wagonmaker's apprentice early in life. Later he added to that trade the blacksmith's craft. He was employed as a helper several places, but came to Pocahontas in 1898, and took employment in the business that he now owns, buying the same in 1914. The woodworking part of the business he had acquired in 1900. He now owns not only the business, but also the real estate on which the same is located, also residence property, and some farm land.

He married Ida Reisenbichler on the 30th of September, 1906. One daughter is the issue, Vanita A.M.W., and she is the household pet, of course. Both Mr. and Mrs. Schmidt were raised in the Lutheran church and are members of the Zion congregation in Pocahontas.

Mr. Schmidt is a Democrat, and has been active in the government of his home town as president of the town board, which office he held one term.