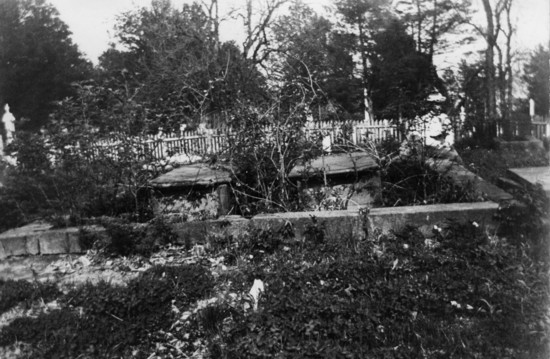 One of my favorite Internet offerings from Missouri History and Hauntings is the almost daily Facebook post with some Missouri-related story about ghastly mayhem or paranormal meanderings. Of these, Morbid Mondays stand out as particularly entertaining for those with a taste for the gruesome.

I thought of those daily clippings from old Missouri newspapers when I ran across the item below while doing some research. It seemed like as good fit for Halloween.

Published in The Daily Republican, Cape Girardeau, on Friday, Oct. 8, 1915.

DUG UP HIS SON FOR LAST LOOK

Visitors to Another Grave Heard Peculiar Noise and Discovered Old Man Coming Up.

That an aged man dug into the grave of his son at Poplar Bluff and exhumed the body to take a last look at the boy was the strange story brought to town today by a traveling man fresh from the suburban place.

The boy died recently and was buried in the Poplar Bluff cemetery before the aged father could be notified and summoned. He arrived there after the funeral and interment of the remains.

Once in the city he inquired the way to the burial ground and then to the newly made grave where no marker of any sort indicated whose body the mound covered. The sexton of the cemetery directed him to the grave and there the old man fell to his knees and prayed long and grievously, sobbing aloud in his anguish.

The sexton went about his duties, the predicament of the aged man not impressing him more or less than numerous similar cases the past few years. But an hour later he was surprised when the old gentleman, once more having regained his composure, made the surprising request that he be permitted to disinter the body of his son so that he might see the loved face once more.

The sexton of course refused the request and the old man went his way out of the cemetery and to the city, apparently satisfied that he had done all he could over the remains of the son.

The next morning, so the story goes, two women and a man visited the cemetery to place flowers on the grave of a recently departed relative.

They were startled by the loud wailing of an old man and upon investigation, when they were unable to see from what point or what person the sobs were emanating, discovered the head and shoulders of the old man coming from a hole in the earth. It was a startling sight for the three persons for a moment but further disclosures enabled them to realize what had happened.

The old gentleman had just closed the coffin after taking a final look at his son's face. Unknown to the sexton he had returned to the cemetery the next morning and with a spade had hurriedly shoveled the clay away and reached the coffin. Not until he had seen his son and then closed the box had he been detected.

As the three other visitors to the cemetery walked away the old man started on the task of shoveling the earth back into the grave. The sexton was apprised of the facts but he refused to take any action against the old man for his disobedience of orders.

The old fellow was one Cain from St. Francis and his son was about 30 years old when he died Sept. 26. The father is a veteran of the Civil War and with his beard long and white and flowing in the wind that blew across the open cemetery was a pathetic figure.

Find A Grave, that website that helps genealogists locate the graves of their long-lost family members, shows a Jake W. Cain buried at the Poplar Bluff City Cemetery. It says Jake was born in 1885 in Missouri and died Sept. 26, 1915, at Poplar Bluff.

Now, while I can't prove that this is the son referred to in the above article, the date of death and age fit.

Jake's death certificate shows that he was married and was employed as a logger. Under cause of death, the certificate reads: "No physician in attendance. Cause of death unknown. Probably malaria." He was the son of William B. and Rebecca Sherwood Cain, according to information found on Ancestry.com.

The story says that his father was a Civil War veteran, but since William was born in 1852, that seems doubtful. The story's author may have gotten this detail wrong, but it is certainly a moving account of a father's love for his boy.