Last week's "From the Morgue" blog included a reprint of the Republican's 10th Anniversary Edition story on Pocahontas, focusing on the town's two Lutheran churches.

This week, we take a look at the businesses operated by the Schoen family and the Landgraf brothers. 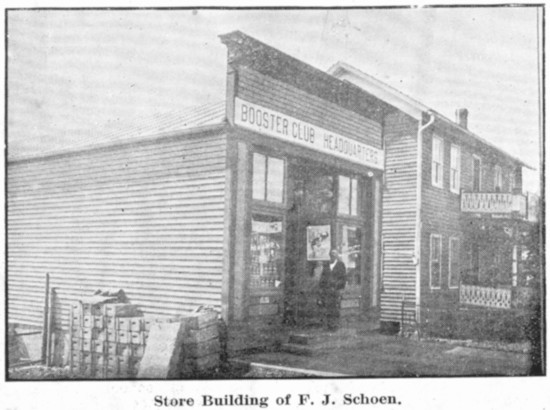 This well-known citizen of Pocahontas was born on Feb. 15, 1867, in Cape Girardeau County, and is the son of Gustav A. and Anna (Lehner) Schoen. The Lutheran parochial school at Pocahontas, the Liberty public school, and the Oak Ridge high school were the institutions of learning wherein he acquired his education. Like all farmer boys, he began to assist in the work on his father's farm as soon as strong enough to do any work, but began to make himself useful as a clerk in the mercantile establishment of his uncle, Peter Lehner, in 1886. When his father bought out Lehner's interest in the general store, F.J. and E.G. Schoen became their father's partners under the firm name of G.A. Schoen & Sons, from January, 1893, to October, 1898. After the death of G.A. Schoen, F.J. and E.G. Schoen, the oldest sons, continued the business as Schoen & Bro. for 11 years to April, 1909, when F.J. (Schoen) bought out his brother and conducted the store in his own name until Oct. 1, 1913, when, selling out all his interests in the firm, he bought the Central Hotel and restaurant, which he and his son now operate.

The restaurant and grocery store have been remodeled and is now a modern building, where all kinds of merchantable goods are kept. Tobacco, cigars, soda and all kinds of soft drinks, eatables, candies, fruits, toys, etc., are on hand at all times in great variety. 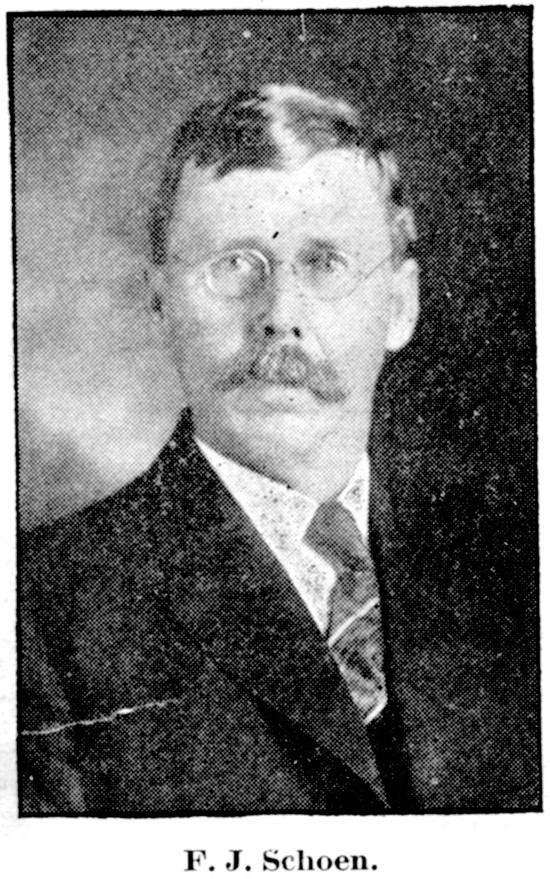 On the 27th day of May, 1888, F.J. Schoen was married to Thresa Kraml, with whom he had four children, two sons, August R. and Adolph W., and two daughters, Concordia A. and Edna A. Several years after the death of his first wife he again married, this time Amanda Kasten, on the 19th day of July, 1914. A nice home on Green Street is at the disposition of the family, which leads an idea life, and a home life at that. All are of the Lutheran faith and attend St. John's Church regularly. Automobiling is the principal pastime of the Schoen family, and they have several good cars.

In public life Mr. Schoen has been and is yet quite prominent, having been postmaster of Pocahontas from 1898 to 1914, and clerk of the board of education for 27 years, still holding that position. In politics Mr. Schoen subscribes to the principles of the Republican party, and he is one of the conspicuous men in the party organization of the county, but although repeatedly urged to become a candidate for office, has never asked for any favors from the part in that way. 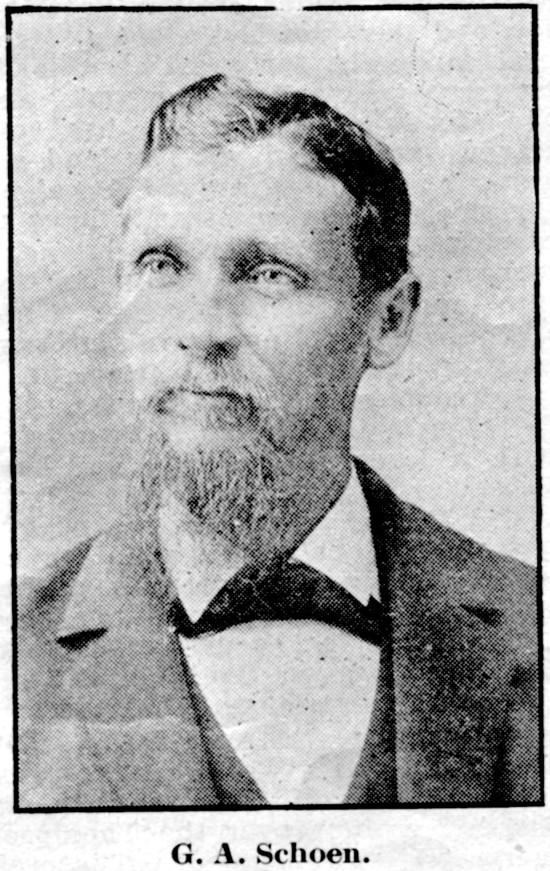 A.R. Schoen, the proprietor of the Central Hotel in Pocahontas is a chip off the old block, to use an old phrase. He was born Jan. 24, 1890, and was educated in the parochial and public schools at Pocahontas, and the Wartburg College at Clinton Iowa. In the public life of his hometown he has held the office of collector one term.

After leaving school he became a clerk in the mercantile establishment of his father, and worked there until he purchased, with his father, the Central Hotel, which he now conducts, and which he has made attractive to the traveling public much more so than this caravansary has ever been before. The hotel has the reputation of furnishing the best meals of any hotel in the smaller towns in Cape Girardeau County.

August R. Schoen was married to Minnie E.B. Fischer on Oct. 1st, 1913, and is the father of one daughter, Helen T.E., who is the boss of the hotel and the household. Mr. Schoen is a Republican and he and his family are members of the Lutheran St. John's Church. 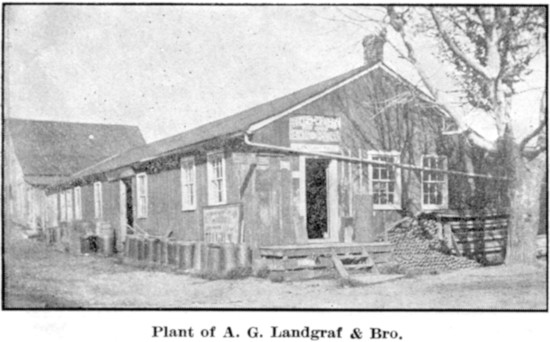 This enterprising firm was organized in the year 1889 under the name of Landgraf & Kieninger. Five years later Mr. Kieninger sold his interest to his partner, who took in his brother, R.C. Landgraf, and the firm became known as that of A.G. Landgraf & Brother and has remained so until today. In their establishment is carried a full line of all kinds of building material, lumber, shingles, lath, roofing, paint, oils, lime, cement, tile, and what not. They also handle brick and sand. In connection with their lumber yard they operate a complete planing mill, and a sawing outfit for dimensional stuff. In their store they carry a full line of builder's hardware and tools, doors, sash, flooring, in fact, everything that a contractor and builder could possibly want.

They also have established a reputation as designers and builders of residences,, school houses, churches and all kinds of structures, including wooden, steel, and concrete bridges. Nearly all the newer church buildings within a radius of ten miles or more of Pocahontas have been erected by them or under their supervision, and the churches stand as monuments to their skill. 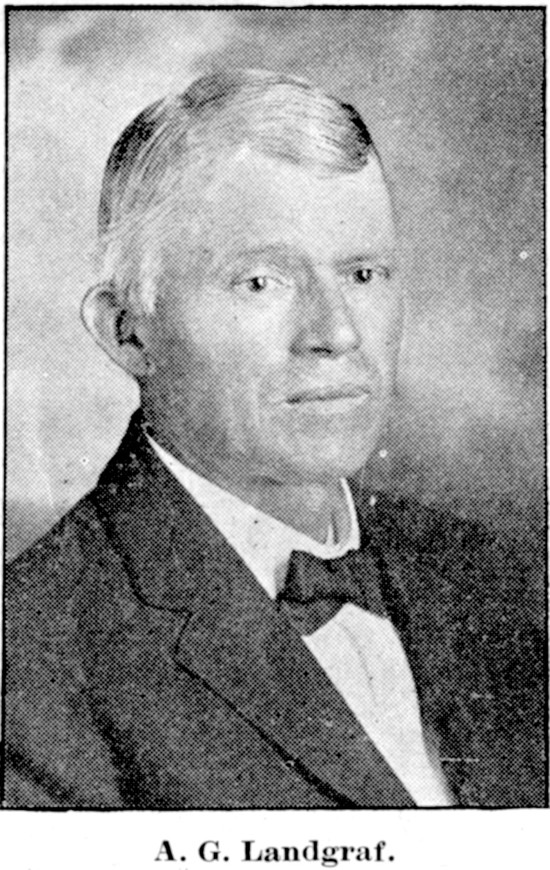 The senior member of the firm of Landgraf & Brother was born near New Wells in Cape Girardeau County on the 16th of November, 1864, and is the son of Herman and Mathilda (Naeser) Landgraf. Adolph attended the parochial school at New Wells, later the public school at the same place, and completed his education in the Pocahontas High School. Being a farmer's son, he naturally worked on the farm first, but later became a carpenter's apprentice and worked at this trade until 1889, when he and J.E. Kieninger entered into partnership and established the business of which he is now the senior partner. On the 20th day of November, 1890, he married Lina Schuppan, and they are the proud parents of three sons, Ludwig H., Arthur A., and Edwin W., and one daughter, Cecilia C. The family dwells in a fine residence on Main Street, and their home is one of the most hospitable in town. All are Lutherans and worship in the Zion Church.

Mr. Landgraf is a Democrat and prominent in that party. He was repeatedly honored by his fellow townsmen by the election to the village board, and served as the president of the board one year, and as member five years. He also held the office of school director 12 years. He also has the gubernatorial appointment as notary public. He is one of the progressive men of the town with the Indian name, deliberate in his actions, and fair in his dealings with his customers and fellow citizens. 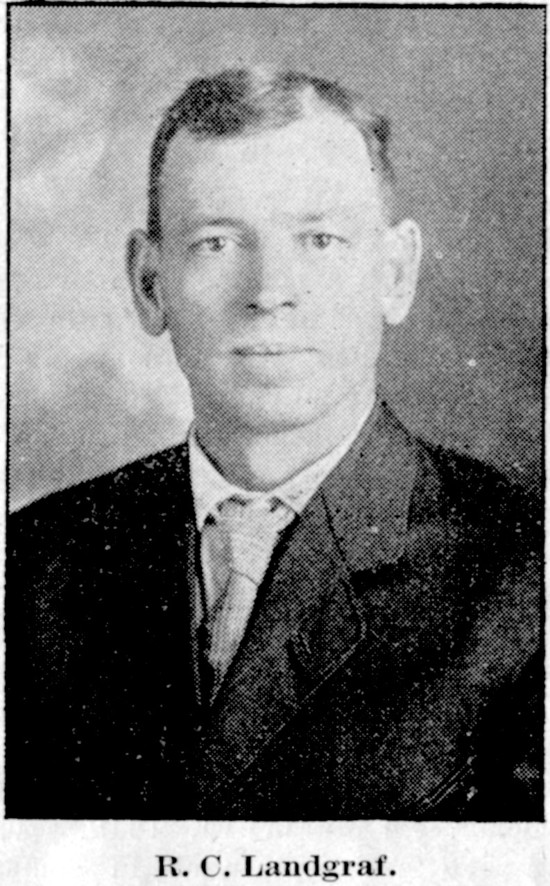 Like his older brother, R.C. Landgraf was born on the farm near New Wells, his birthday being the second day of September, 1872. He attended the parochial and public schools, and became a helper on he farm. He learned the carpenter's trade and worked at that in Cape Girardeau and in Carroll County until 1895, when he entered into partnership with his older brother under the name of A.G. Landgraf & Brother. He and his family own and occupy residence property in Pocahontas, and are all of the Lutheran faith.

He was first married to Caroline E.M. Beckemeier on the 6th day of January, 1898, but Mrs. Landgraf departed this life on October 22nd, 1909. On the 23rd day of March, 1913, he again married, this time to Lena Mueller. Of his first marriage there survive two sons, Ruben H.C. and Marvin, and the second one daughter, Ruth V.

He also is a Democrat and a good one, has served as a member of the town board 12 years, and is a member of the Lutheran Bund of Michigan. He is a hard worker, quiet and unobtrusive in his ways, but a keen observer and can drive a bargain and hold his own in any kind of deal.