Curiosity got the better of me, when I ran across an obituary for Tipporah "Tippie" S. Knott Hawkins, while reading the 1915 Daily Republican newspaper recently. While the circumstances of her death weren't that unusual, the article referred to her as "the mother of a large family of prominent children and the widow of a jurist who placed his name high in the records of distinguished Missourians."

However, when I went hunting her renowned jurist husband, I found that our files are lacking in their mentions of Judge David L. Hawkins. In fact, there's more about his Cape Girardeau home than about him. 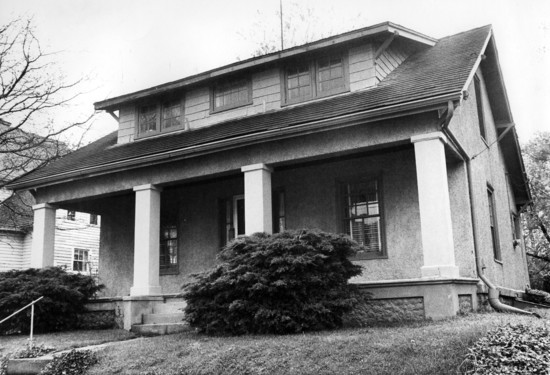 This house, 38 N. Fountain St., was built in about 1880 by John McGhee and was later the residence of the Judge David L. Hawkins' family.

An article, written by Sally Wright Owen in April 21, 1973, for the "old house series" in The Southeast Missourian, gives a brief history of Hawkins.

"The Hawkins name is a familiar one to longtime area residents. David L. Hawkins, who established a law office here in 1868, came to the Midwest from New York in 1866. He was highly esteemed by his peers as a jurist and lawyer. Judge Hawkins was circuit judge for some years, and made trips to court in Scott County on horseback and trips to other southern Missouri counties via steamboat. He later served as assistant secretary of the interior under President Grover Cleveland..."

I was able to glean little else from the Missourian clip files, but I did locate an anemic obituary for Judge Hawkins in the Jan. 2, 1892, edition of the Cape Girardeau Weekly Democrat:

Judge David L. Hawkins died at his home near Blodgett, Scott County, this, Saturday morning, Dec. 26. The judge had been in poor health for nearly a year, and for the last two weeks his death has been expected at any hour, and his relatives in this city were not surprised when notified by wire this morning that death had relieved the Judge of his suffering. No arrangements for the funeral have yet been made and we are not informed as to where the deceased will be laid to rest.

Judge Hawkins was about sixty-four years of age and he has resided in Southeast Missouri forty years. He held the office of Circuit Judge in this Judicial Circuit for twelve years and was one of the best and ablest Judges in the State.

The Ste. Genevieve Fair Play newspaper reflected on Hawkins' character during the political campaign to select a congressional representative for Southeast Missouri in 1872. This excerpt is from the Fair Play's July 25, 1872, edition. It was reprinted from the Gayoso Democrat:

"Judge David L. Hawkins fills bill. He does not like pushing things to extremes. He is an honest, upright, progressive man, whose character is unblemished, and his superior in point of intellect cannot be found in Southeast Missouri.

"The swamp counties of this district have long been neglected by the representatives, who have always heretofore been elected from the upper portion of the district; and now that we have a chance to cast our votes for one of our noble sons, why not do so, and send him fourth to represent us in Congress? Mr. Hawkins is, without a doubt, the strongest man in the field, and as to there being any other swamp man who could carry any influence, we say for one, there is none, and if the people don't find it out soon they will late. Hawkins will go into the Fredericktown convention with an overwhelming majority. See if he don't."

While Hawkins didn't serve as a representative from Missouri, he did make it to Washington, D.C., where he worked as assistant secretary of the interior in the mid-1880s. The following article reviews his long career. It's followed by the article that sparked the writing of this blog: Wife Tippie's obituary in 1915. 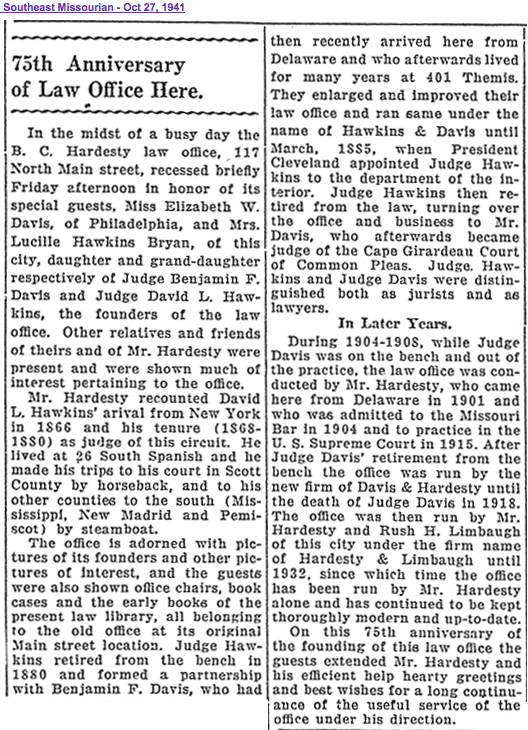 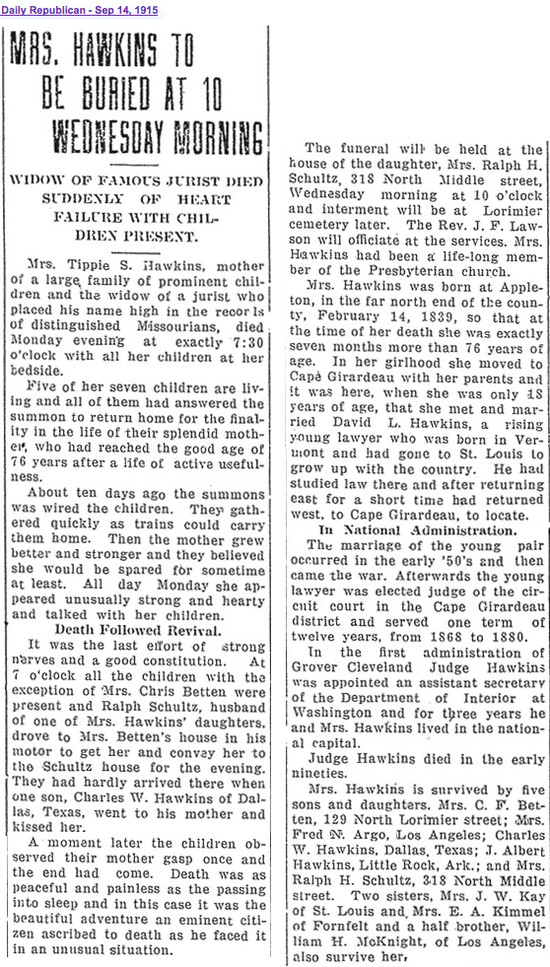 The couple is buried together at New Lorimier Cemetery in Cape Girardeau.