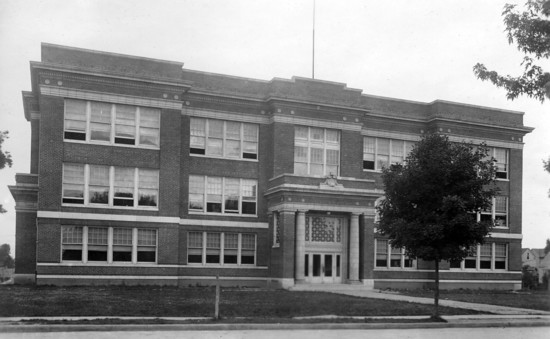 The public high school got its start in 1915, when it opened on North Pacific Street. During the time of its construction, it didn't really have a formal name. It wasn't until it got closer to completion that the newspaper of the day -- The Daily Republican -- began calling it "the new Central school."

Urged on by the leaders of the day, both civic and religious, Cape Girardeau citizens voted to build the school by a 7-to-1 margin in November 1913. The $125,000 bond issue the voters approved saw the construction of Central High School and Washington Elementary School, as well as the enlargement of Lincoln School, the African-American public school.

Construction of the high school saw its ups and downs, including a dispute between the contractor and the school board that delayed work, but eventually the school was completed. On Oct. 22, 1915, Central High School received its first classes. This article ran the same day in The Daily Republican.

250 High and Eighth Grade Boys and Girls Go Over.

No Recitations Held There.

Two hundred and fifty high school and eighth grade pupils of the public school system started to the new Central building this morning for the first time.

There was much confusion naturally and no effort at holding classes was made by any teacher today. It was the intention to have the pupils meet in the rooms where they might get acquainted with the building and know what to do and where to go beginning Monday.

Announcement was made to the pupils Thursday that they were expected to appear at Central school this morning. They were not expected to attend until 9 o'clock but they were there before that hour, anxious to get into the new building.

The great majority of them at once went to the main study hall, which contains 170 seats. Others went to class rooms which are seated. Principal Doherty and Miss Wilson, librarian and superintendent of the study hall, gave out the directions where the various classes were to be held and the pupils went to the rooms assigned for five-minute sessions to hear direct from the teachers as to what would be expected Monday morning when work begins properly.

First of all today assembly was made in the auditorium on the third floor. The big assembly room is not yet completed, carpenters being still engaged finishing the stage. As a carpenter sawed boards into parts Superintendent Crocker was called upon for a speech and to the accompaniment of the saw he gave the pupils a short talk.

The building is not yet completed, although the carpenters and other artisans are rushing the work as rapidly as possible. The floors are all in and the woodwork completed with slight exceptions.

The equipment for Miss Evans' domestic science and sewing rooms is on hand, but has not yet been installed. There are dozens of new cooking tables with three gas burners in the center of each.

The book stacks for the library are on hand, but have not been put up.

Some delay has been caused by a miscalculation of the space on the lower floor left for individual lockers for students. The steel lockers are longer than the space and the lockers have to be trimmed down somewhat to fit.

Louis Wittmore was today putting the finishing touches on the heating plant and during the day raised the steam sufficient to give the plant a thorough test. The double system, radiation and ventilation, is one of the largest and most perfect ever put into a Missouri school building. When any heat is required, the ventilating system will be used to waft new, fresh air, taken from stacks running from the top of the building. The air as it enters a room in the basement is heated to exactly 70 degrees and then pumped to every room in the building. When it gets colder and more heat is required the radiators will be used in addition.

By Monday the building will be cleaned of all sawdust and scrap lumber in the halls and corridors and not any of the confusion will occur that greeted the pupils today.

On Dec. 17, 1915, the school was dedicated during an evening program. Keynote speaker for the event was State Superintendent of Schools Howard A. Gass. He predicted at the time that it wouldn't take long before the city supported a high school with 500 pupils, necessitating the construction of a new building.

The Pacific Street structure served as Cape Girardeau's public high school until 1953, when a new facility opened on Caruthers Avenue. The original Central High was remade into a junior high school and later a seventh grade center. Its name was changed to Louis J. Schultz School. Its most recent renovation has transformed it into senior citizen apartments. 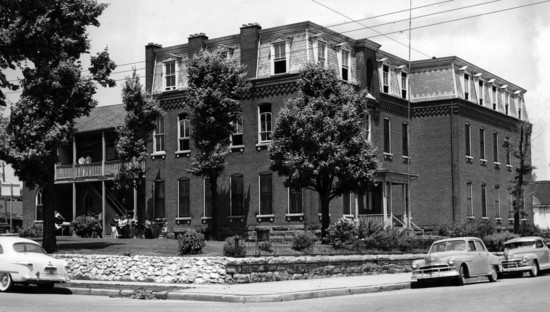 I wouldn't have remembered the 90th anniversary of Notre Dame Regional High School, if my brother hadn't mentioned seeing a poster about it at the school. Originally named St. Mary's High School, it got its start as the brainchild of the Rev. Eberhard Pruente, longtime pastor of St. Mary's Catholic Church.

Pruente purchased the former Saint Francis Hospital building, at the northwest corner of William and Sprigg streets, in the spring of 1925. The structure was renovated that summer, and classes opened the following fall.

Here are several articles about the beginnings of Notre Dame. All are from The Southeast Missourian newspaper. 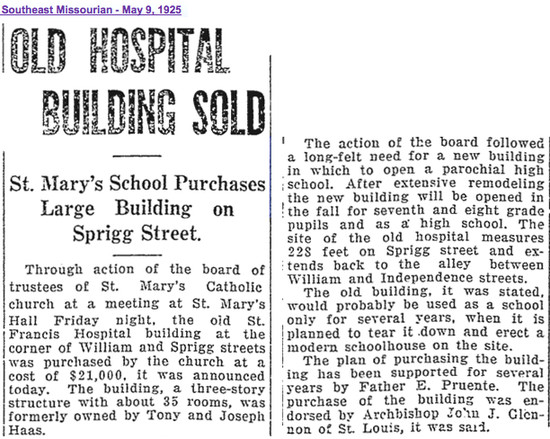 Construction of Saint Francis Hospital on that site started with a small, brick facility in 1878. Gradually, over the years, it was enlarged. It was used until a new hospital was built in 1914 at Good Hope and Pacific streets. 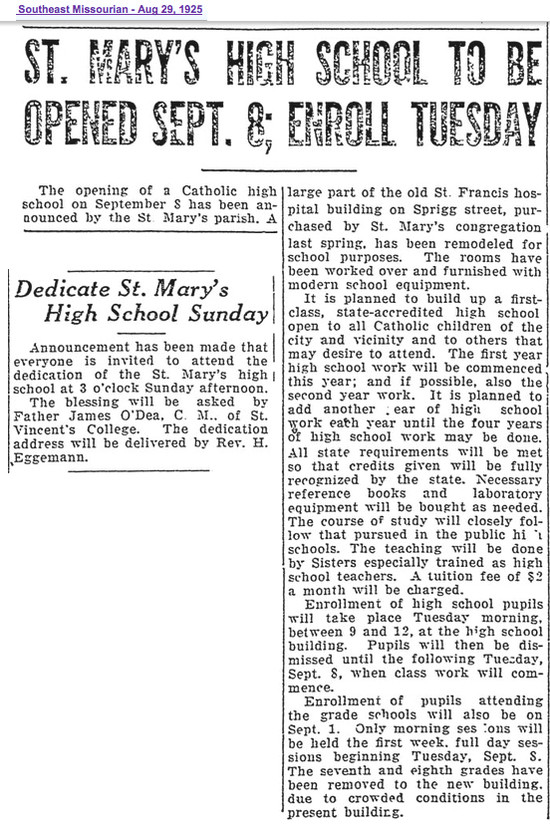 The opening of St. Mary's High School was apparently very quiet, with only one teacher instructing a freshman class of 14 students.

The school graduated its first senior class in 1929, the same week the Rev. Pruente was honored for his 50 years as a Catholic priest. 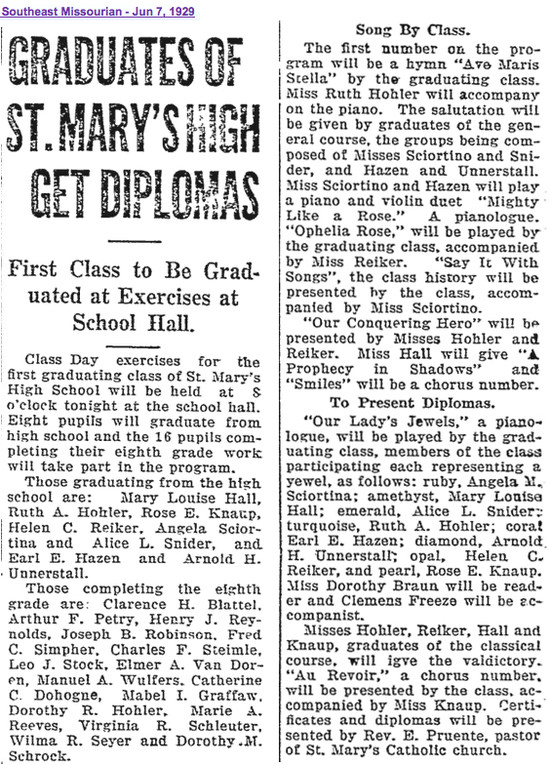 St. Mary's High School remained at that location until 1954, when it moved to a new facility off of Caruthers Avenue.

In April 1956, the old hospital-turned-high school was razed. A supermarket was built on that corner.