The North Cape Girardeau County town of New Wells fared little better than Dutchtown in The Daily Republican's 10th Anniversary Edition. While Dutchtown, which was featured in last week's Front the Morgue blog, was represented by only one article in the special section, New Wells had two. 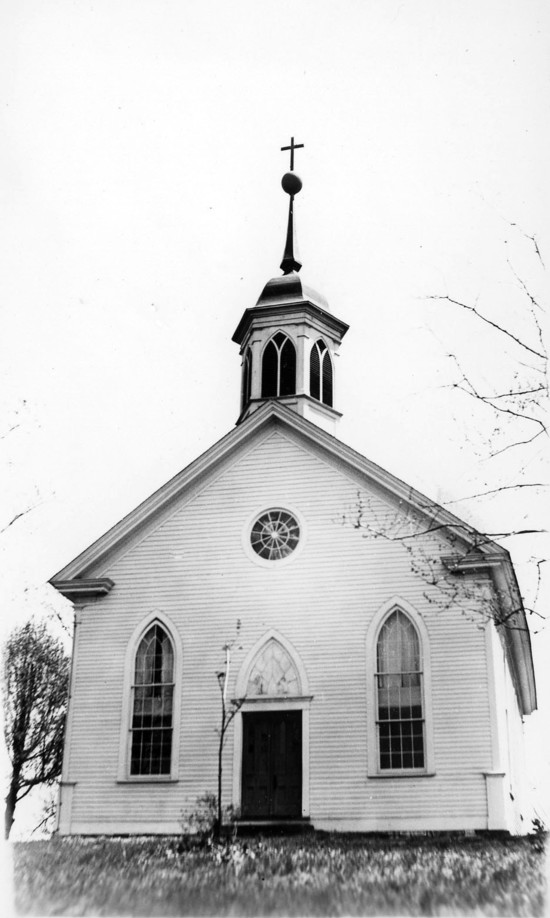 This little village, situated in the northeastern part of Cape Girardeau County, was founded during the first part of the nineteenth century by Austrians from the vicinity of the city of Wells, who, through piety, gave their settlement the name of their home city in the old country.

At first it was only a place where the Lutherans gathered on Sunday in a rough log cabin to worship their God unto the dictates of their conscience, but soon dwelling houses and shops were erected, a store was opened, and tradespeople of all kinds made the new settlement their home. As the surrounding hills were settled up, the town increased in size and importance, and at one time it was one of the principal trading points between Cape Girardeau and Perryville. Soon the old log church was too small, and a large frame building was erected on a hilltop just south of the old one. The location is a commanding one, and affords a view over all the adjacent territory for miles. The spire of the church can be seen for 10 miles in several directions. The congregation grew rapidly as fresh immigrants kept coming from

Austria for several years, and soon all the land in the vicinity was occupie3d by these hardy pioneers, taking the places of the original settlers who began to move westward. With the tenacity that characterizes the Austrian, they prospered on the hilly farms around the settlement, and some of them became moderately wealthy. The church on the hill was still their gathering place. Here the old customs, brought over from the fatherland, were adhered to. Many were the disputes that were settled here that would otherwise have occupie3d the time of minor courts. The minister and the board of trustees acted as a board of arbitration in many matters, with the Bible as the only statute.

This has changed now considerably. New Wells is no more the idyl or pastoral poem of former years. It is a busy little town with hustling merchants, where up to date farmers come to do their trading and exchange their products for the wares of the world's markets. Powerful automobiles whisk by the old cemetery in the middle of the town, dispelling with their hoarse honking the spirits of the past that cluster around the round knob on which still majestically rests the house of worship that has become the spiritual home of thousands in the years gone by. Two large and modern parochial school houses squat at the foot of this hill as if seeking protection under the wings of the imposing structure on the summit. And all around are the fertile fields which show the hand of the expert farmer, dotted here and there with large farm homes and splendid farm buildings. The best roads in the country wind around through the valleys and over the hills in all directions, and, seen from the top of the church hill, appear like ribbons carelessly thrown over the landscape. 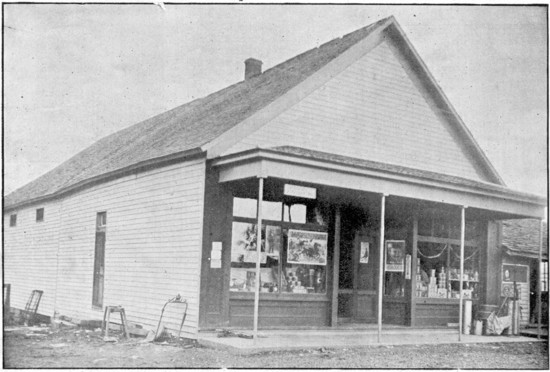 In the firm of Cotner & Schuppan New Wells has a firm that is the right firm in the right place in he truest sense of the wo9rd. The gentlemen at the head of this establishment have the fine conception of business that prompts them to be more than an ordinary trading place to the community. The store is looked upon as the center of trade for the part of the county, as a place where the farmers gather to discuss affairs affecting them all, a place where they can make their wants known and are sure at any time to find a sympathetic ear and a helping hand.

The large store building also contains the post office, another institution that brings the citizens together from near and far. The well lighted storerooms are full of all kinds of merchandise, ranging from dry goods to hardware, from groceries to shoes, oils, paints, creams separators, farm machinery, harness, notions, toys, tobacco, yes, thousands of articles that could be named, are always kept on hand in fresh consignments. Country produce of whatsoever description or nature is here bought at highest market prices. Hay and feed is handled in carload lots. Railroad ties, livestock, even farms and other real estate, can be sold or bought at Cotner & Schuppan's. In fact, the firm does such an enormous business that the people sometimes wonder how it is possible to handle so much stuff in a town like New Wells, away from a railroad.

The success that the firm has had is marvelous. From a little, sleepy country store, the place has been converted into a modern business house teeming with life and humming with activity day and night. Dapper clerks are ever ready to attend to every call by the many customers, and the proprietors, in their quiet way, have all the departments well in hand, pushing them for all that is in them, vigorously and with excellent judgment. Where their predecessors managed to eke out a bare living, Cotner & Schuppan have become prosperous. Where formerly the few shelves were covered with shopworn and antedated goods, now repose the wares that are wanted by a refined trade. Where formerly slipshod business methods were in vogue, now the strictest order prevails. Where former merchants let the volume of trade flood by to the larger cities, now stand alert and wide-awake men that are quick to respond to every opportunity that presents itself. The public was not slow in recognizing the fact that conditions had changed in New Wells. The trade that had strayed away to other places, came back, and increased from year to year. Addition after addition had to be built to house the ever-increasing stock until now the floor space is more than four times what it formerly was, and still more room is needed.

It is remarkable how one man's activities sometimes change the appearance of a whole community, how one person can bring into a seemingly dead town new life and renewed energy.

When John M. Carter bought an interest in the store at New Wells, and the firm began to do business under the name of Cotner & Bodenschatz, things began to move at once. And the business has continued to grow since that time, the end is not yet.

John M. Cotner is a Cape County product, and was born near Shawneetown on the 22nd day of December, 1868, his parents being William W. And Sarah (Reed) Cotner. After acquiring a thorough public school education, John took employment with a mercantile firm in Dexter, later transferred to Poplar Bluff, and still later to Jackson. In 1892 he bought a stock of goods, which he moved to New Wells in 1895. The following year he bought out his partner, Mr. Bodenschatz, and for four years he conducted the business alone. In September, 1910, Mr. Schuppan bought an interest in the business, and the two have continued as partners until this day. Mr. Schuppan had been employed by Mr. Cotner as clerk for several years before he became a partner.

Mr. Cotner bought a half interest in another Shawneetown firm, but soon sold that again. Later he purchased the Lee Weisbrod store in Appleton, and still owns that. Employees conduct this business for Mr. Cotner, who stays at New Wells all the time and gives his personal attention to the store there.

Outside these interests Mr. Cotner owns 1,250 acres (of) valuable farm land, a good residence in New Wells, a threshing outfit, a sawmill, automobile, and other personal property. He is an expert judge of livestock, and buys and sells stock all the time.

He was made postmaster of New Wells in 1895 under Republican administration, he being a staunch Republican. He employs a good number of people on his farms and oversees all the work personally. Another branch of his extended interests is the buying and selling of railroad ties, of which he handles on the average 50,000 a year.

Mr. Cotner is a married man, his wife formerly being known as Miss Julia J. Shoults. She is a true homemaker, her home being her realm, and the management thereof fills her life.

The junior member of Cotner & Schuppan was born on a farm near New Wells on the 7th of January, 1881, son of (Louis and Rosine Lehner) Schuppan. After finishing the Lutheran parochial school, he took advantage of all the facilities presented by the public school and secured a good education, which now enables him to fill his place in the large business to the best advantage. At the age of 16 years he began his career in the mercantile business as a clerk in the store of which he is now part owner. In 1910 he bought an interest and the firm became known as Cotner & Schuppan.

On June 6, 1909, he was married to Lydia Winkler, daughter of the Rev. Winkler, of New Wells. One daughter, Bertha, has blessed the union. A splendid home was built by Mr. Schuppan about the time of his marriage and here the family enjoys life to the fullest extent. The Lutheran church is their house of worship, and hither they journey as often as practicable each Sunday.

Mr. Schuppan votes the Republican ticket, but takes no active part in the political game. He is of a very quiet and retiring disposition, adverse to any loud discussion of any matter, always working at something and keeping up his part of the duties of keeping the large business going.

John Schuppan's obituary shows that he burned to do something different with his life, as he ended up a coal dealer in Cape Girardeau. Ernst Schuppan, on the other hand, remained in the mercantile business the rest of his life, with a different partner. 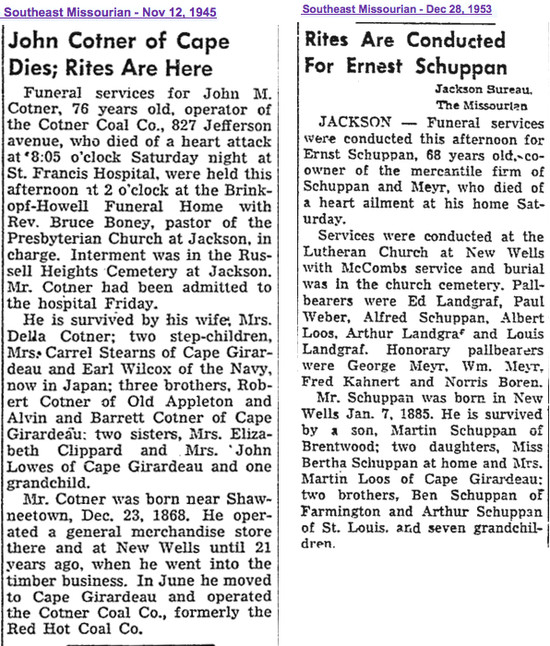