35 years later, and we still don't know what this is

I received a call recently from Dr. Jason Williamson of Portland, Michigan.

He referred me to a newspaper article printed in the Southeast Missourian in 1980 that asked readers to help identify a medallion found by a Cape Girardeau resident as he dug in his tomato patch. Williamson asked whether we had ever solved the mystery of the artifact. Sad to say, that even after nearly 35 years, we are no closer to an explanation.

The article describes the medallion's engraving as "a large double-masted sailing vessel, shaped like a giant treasure chest..." However, in examining a larger version of Fred Lynch's photo, I believe the engraving depicts a treasure chest set adrift from the ship, with the double-masted vessel in the background and the chest in front. Around the edge of the disc were the words "Hertzberg Treasurer Trove."

I turned to the internet for an explanation, but the only thing that I found that referred to the "Hertzberg Treasure Trove" was the Missourian's own original article. I told my caller that I would reprint the story in this blog, and ask that anyone who knows what the medallion is to email me at ssanders@semissourian.com. 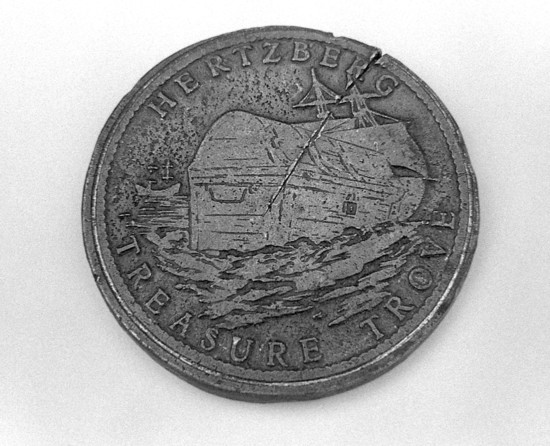 A large object, with the inscription, "Hertzberg Treasure Trove" was found recently by John McManus Jr. while working in a garden. McManus is interested in finding the origin of the object. 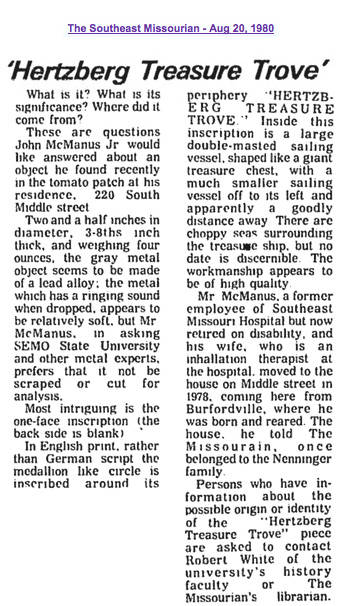