Anita Uelsmann, a lady who I'm sure is a distant cousin of mine on my dad's side from the Scott City area, contacted the Missourian recently with the request that we publish a letter to the editor written in 1987 by the late Ollie Amick and printed originally in The Jimplicute, a Scott City newspaper.

The letter and accompanying 1945 article from an unknown newspaper (possibly "The Shamrock," the base newspaper of the O'Reilly General Army Hospital in Springfield, Missouri) reflect on the service selflessly offered to his country by Lawrence "Lonnie" Mirgaux. I agree with Anita that they are fitting offerings for the Fourth of July holiday.

While we could not republish the items in the Missourian for Independence Day, I did rearrange scheduled blogs to bring my readers this tribute. It reminds me of the sacrifices my own father made in the defense of the United States. 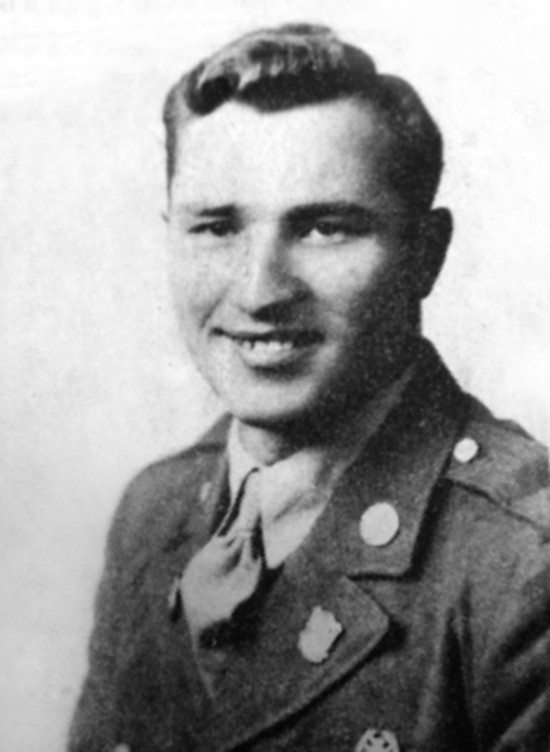 Letter To The Editor

The following newspaper clipping refers to Lonnie Mirgaux of Scott City, who passed away this past week. I believe that it speaks well of his contribution to our country. Between the lines there was much suffering and heartache and pain that was not mentioned or written about. As an artilleryman, with Long Tom guns, our battalion took position just north of the St. Lo area referred to. I remember our first firing position was in support of troops involved in the St. Lo breakthrough. We were in support of the 29th Division (Keystone), 30th (Old Hickory), and the 35th (Missouri). The Germans had three divisions, a Mobile Brigade, an Engineer battalion and three battalions of the 3rd Para Division. The last named were supposed to be the best the enemy could put into the field. I do not remember "Hill 122," but was aware of other hills and the toll in injury and lives that were required in their capture.

Every now and then, we as Americans should reflect back on sacrifices such as "Lonnie's". Our country, our community, our veteran's organization and we, ourselves, owe him a debt of gratitude for the service he performed for us. In some way, each day, we all should show it in an act of kindness toward our fellowman, especially those less fortunate than ourselves. We should want and expect our country to be upright and honest in its dealings with other countries. If we do less, we fall short of recognizing what the life of Lonnie Mirgaux has meant to those of us who knew him and loved him. He earned his peace many years ago. His life among us since that time, has only made him more worthy of that rest.

Eighty U.S. doughboys alive, out of 200, after one day of fighting.

Those were the odds faced by an American infantry division near St. Lo, France last summer, according to Pfc. Lawrence L. Mirgaux of Illmo, wounded veteran who has been returned to the States for treatment at O'Reilly General Hospital in Springfield.

But the division, with which Mirgaux was fighting as an automatic rifleman, overcame the odds. Its objective was captured. And with reinforcements, it carried on the fight without relief.

Mirgaux said his division was assigned to the task of capturing "Hill 122" near St. Lo. Firmly entrenched on the hill and in its vicinity were five Nazi divisions.

"It was the toughest thing I've ever seen," the youth said. "We attacked that hill for one entire day. My company had only 80 men left out of its original 200, and we were battling along a 300-yard front.

"The Jerry counterattacked intermittently. But at terrific cost, we took the hill and held it without reinforcements for two weeks."

Later in the campaign, Mirgaux's outfit was completely surrounded by Nazi forces, when it pushed ahead of the main American lines.

"For two days, we were trapped out there," he related. "At the end of those two days, we were just bluffing... had no water, little food, and our ammunition was almost gone. Just in the nick of time, another division pushed up to us."

The 23-year-old veteran, who formerly piloted a ferry boat at the Thebes (Illinois) Ferry, was wounded on Aug. 9 in Normandy when a mortar fragment hit him in the forehead and chest.

In an interview he called on the people of Cape Girardeau County and Scott County to "keep those supplies flowing to the boys on the German border, and to the fellows out in the Pacific."

Saying he knew what it meant to be trapped without the proper equipment, he asked for "100 percent cooperation with the Sixth War Loan Drive, by buying bonds with every cent, so that none of the soldiers still over there will have to be without a single item of necessary equipment."

"Cape County and Scott County will go 'over the top' on the bond drive -- that's a foregone conclusion,' he said, "but what will really count will be the cumulative total. And that total should be far over the actual goal set for the drive. 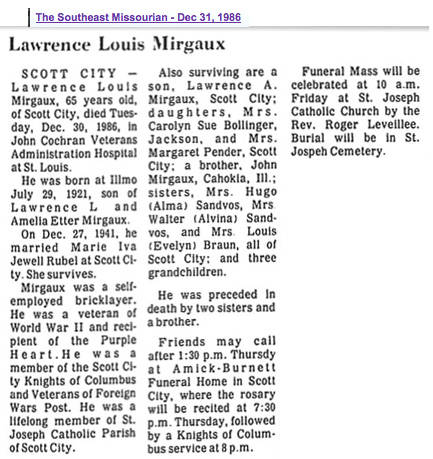