10th Anniversary Edition: All about Burfordville

The Daily Republican's 10th anniversary edition in 1915 gives only limited space to the city of Burfordville. And only three Burfordville businesses were highlighted in the publication. 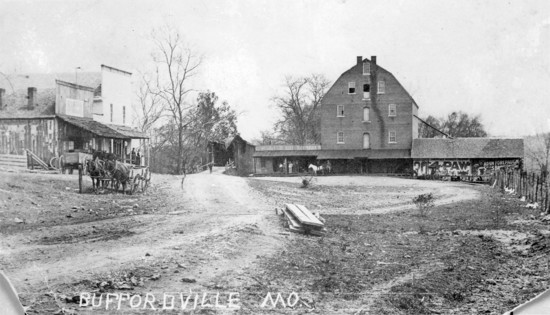 This image of Burfordville is from an undated postcard.

The town, named for one of the pioneer families, was formerly known as Bollinger's Mill, as Captain George Frederick Bollinger, who came from North Carolina, built the first mill on (the) Whitewater (River) at the present site of Burfordville in 1797. After his arrival he was promised a large concession of land if he would induce others from his home state to come into this county. He returned to North Carolina and brought with him into this section about twenty families, who settled along the Whitewater River. All these families were either German or Swiss, and the following names were found among them: Statler, Nyswonger, Grount, Cryts, Cotner, Miller, Leimbach, Welker and Slinkard. Later a minister named Weiberg (Whybark) came and looked after the spiritual wants of the colonists.

Captain Bollinger, being the most influential among the colonists, naturally became their leader, and as his mill was the only one within a radius of twenty miles or more, he became wealthy. Around this mill the town of Burfordville was built up, and is now an enterprising little place, with several mercantile establishments and shops a large public school, churches, lodges, etc.

The fertile lands surrounding it and forming the bottoms along Whitewater River, contains many rich farms, the owners of which make Burfordville their trading point. Situated on one of the main roads, the Cape Girardeau-Marble Hill gravel road, it enjoys a liberal patronage from the inhabitants of the adjoining territory for miles around.

The town boasts of more modern homes in proportion to its population than any other town in Cape Girardeau County, and nearly all of these have been erected in the last decade.

J.H. Estes, one of the most prominent farmers and stockmen in Cape Girardeau County, was born on August 25, 1866, the son of Joseph H. and Lavina (Limaugh) Estes. He attended the public school, but his father died when J.H. was only about 17 years old and, being the oldest son, he had to go to work in earnest. At the age of twenty, he bought the interest of his brother (one-third) in the farm, and started in to farm on his own account. Later, he bought his second brother's interest, and became the owner of 340 acres of splendid land. Not many years after that he acquired more land in other locations in the county.

At the age of 20 he began to deal in livestock, continuing in that business until the present day. He covers a territory of about twenty miles around Burfordville, buying stock. He is considered one of the best judges of farm animals in the county. He and his sons handle on average from 150 to 200 mules each year, a large number of sheep, 25 to 30 cars of cattle and hogs per year. They ship to the National Stock Yards in East St. Louis. His sons, Joe W. and Roland F., became his partners in 1910. They have, under the tutorship of their father, become proficient in the trade, and can drive a bargain with all the shrewdness of older men.

The senior Estes was married to Lorana E. Bast on the 13th day of November, 1885, , and to the union seven children were born, two sons dying when infants and the two named above and three daughters, Mrs. Birdie Proffer, Mrs. Ruth A. Miller and Hattie Lou Hazel still single. Mrs. Estes died April 7, 1901, and Oct. 18, 1903, Mr. Estes married Lorada Hutson. He is a Democrat and a Mason. His fellow townsmen have honored him by electing him to the town council, and he held the office six years.

The oldest son, Joe W., is a graduate of the graded public school at Burfordville, and is an exceedingly bright fellow and model young man. He delights in the work on the farm and applies modern methods to farming. Roland E. attended the Cape Normal after finishing the public school, and also took two courses in agriculture. What he learned there he puts into practice in his farm work, but he has by no means become a so-called book farmer, believing still that hard work and lots of it is the main essential in successful farming.

The family occupies a spacious and comfortable farm home in Burfordville. A well-kept lawn with fine shade trees separate the house from the street. Back of it stands the unusually large and well-equipped barns and outbuildings. All modern farm machinery is on hand in abundance, silos and windmills are part of the general scheme. Fine horses and pleasure vehicles, including a good motor car, are at the disposal of the family at all times.

The family is known near and far as one of the most social in the county, counting their friends by the hundreds. They work and live and enjoy themselves as is proper for a well-to-do farmer's family to do, and there is nothing small in their labors nor in their recreation, everything is on a large scale.

The proprietor of this prosperous business was born on the 19th day of September in Bollinger County, the son of E.H. and Elizabeth (Jenkins) Robins. Having obtained a thorough education in the public schools and the Mayfield=Smith Academy at Marble Hill, he became a pedagogue and taught school for five years and farmed at the same time. In 1905 he became a merchant in Gravel Hill, in the extreme western limits of Cape Girardeau County, but sold out and came to Burfordville in 1913 and engaged in merchandising in that town, and soon began to prosper.

Having been married to Laura B. Nanny since the 23rd day of March, 1904, he is now the father of three daughters, Gladys V., Glenda O. and Chelma R. While in Gravel Hill he held the office of postmaster of that village. Politically he is a Democrat, and socially affiliates with the lodge of Maccabees.

Mr. Robins has the faculty to keep on hand only seasonable goods, and for that reason his place of business is sought by the general public in his territory. Fair treatment and honest goods have always been the attractions at his store, hence his success. He represents that type of county merchant that knows from experience just what his customers need, and supplies their wants accordingly. In the historic old town of Burfordville he has done much to substantiate the reputation of the trades-people of this quaint old village as being square and upright with all that come to trade here. But this has not kept him from being up-t0-date in every respect, and he can drive a bargain as well as any of his brother merchants in the cities.

This firm was established in 1885 by Hinkle and Wilson, but since 1892 is known as W.G. Wilson & Co. In the large building this company carries a complete stock of all kinds of merchandise that goes to make up a stock of a general store in a country town, and does an extensive business.

W.G. Wilson was born in Oak Ridge on the 12th day of August, 1859, the son of C.O. and Adeline (Beal) Wilson. His education was obtained in the splendid public school and the high school of his native city, after which he took employment with the Hinkle-Statler Mercantile Company in Oak Ridge, and there acquired a thorough knowledge of his profession. After serving in this firm three years, he came to Burfordville and became one of the firm of J.M. Hinkle & Co. Later, in 1892, he took in his brother, Alec, bought out Mr. Hinkle's interest in the concern, and the firm became what it is now, W.G. Wilson & Co., and has remained so since that time.

Mr. Wilson is a married man. His wife, who was Norma McLane, and he were married on the 20th day of April, 1890, and they are the proud parents of two sons, Harry L. and Floyd. Politically, Mr. Wilson adheres to the principles of the Democratic party, and in lodge circles he is known as a Mason and an A.O.U.W. Besides the mercantile business, he has other interests, being a stockholder in the Cape County Savings Bank and other institutions. The firm owns the building in which the business is located, and it is a commodious place, with large salesroom, convenient counters and shelving.