Charles W. Armgardt won the admiration of Cape Girardeans during his lifetime as a band and orchestra leader, and as a teacher of musical instruments. Curiously, though, despite his many years in the musical limelight, I have yet to find a picture of Charles in a band uniform. Rather, the only photo I found of him shows him garbed in a much different uniform.

Charles was born in Cape Girardeau on Oct. 14, 1868, the son of Henry and Julia Armgardt. He married Caroline Brinkopf in Randol Township on Nov. 24, 1889.

While we don't know Charles' formal educational training, we do know that he learned the blacksmith trade from William Bohnsack of Cape Girardeau. He would go on to operate his own smithy in the 800 block of Broadway and then at Egypt Mills for six years. He also worked as a boiler specialist in the old Fuerth Foundry in Cape Girardeau.

At some point in his young adult life, however, he put on the uniform of a law enforcement officer, serving as Cape Girardeau's first town marshal. The 1900 Federal Census for Cape Girardeau confirms that. His obituary says he was the city's "first full-time town marshal."

We don't know how long Charles kept the peace, but by 1906 he was making a living as a musician. At various times and in various sources from that date until his death in 1946, Charles Armgardt was listed as a musician or a music teacher in Cape Girardeau. In addition, he was a long-time member and some-time director of the Cape Girardeau Municipal Band, although I have been unable to find him identified in any of the muny band pictures in the Missourian's archive.

He was also identified with a local, three-piece orchestra composed of Charles on cornet, John Wittmor on violin, and Mrs. Addie Sherwood on piano. 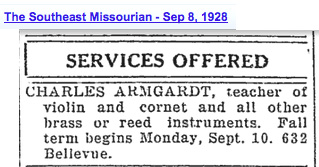 In addition, Charles' obituary noted that he "taught band music first at the old Normal School for about 15 years and later at Central High School. He was one of the original members of the town band. He played his last concert (at age 77) with the band last Thursday at the District Fair."

Charles died on Sept. 17, 1946, while driving his automobile less than two blocks from his home on North Sprigg Street: "Mr. Armgardt had driven his Model T Ford roadster across Broadway south on Sprigg Street when the motor quit. After spending about 15 minutes cranking the car before it started again, he got back into the vehicle and started forward. As he did so he slumped over the steering wheel, apparently stricken with a heart attack. The car rolled on a short distance and into the rear of a parked car... Mr. Armgardt had succumbed when a physician arrived." He was survived by his widow; a son, Henry Armgardt, and a granddaughter, Marguerite Armgardt.

While searching for details about Charles Armgardt's life, I found numerous items about his musical talent. But I also found two other clippings that I found intriguing. 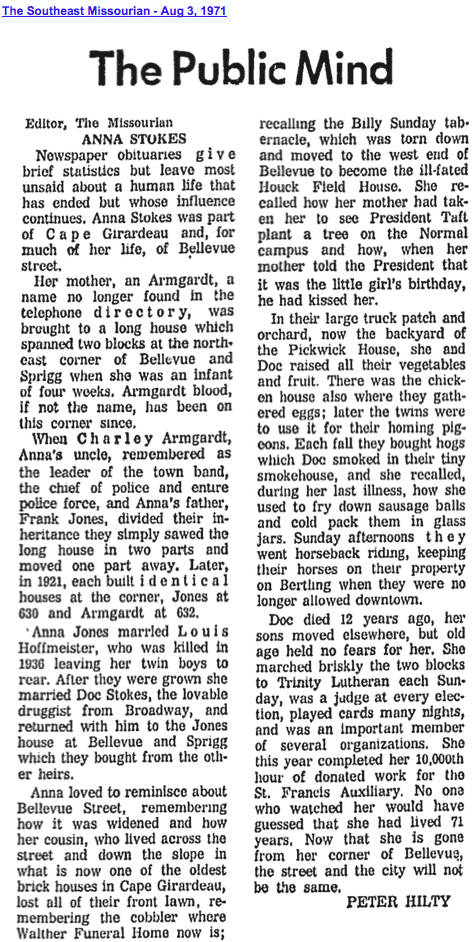 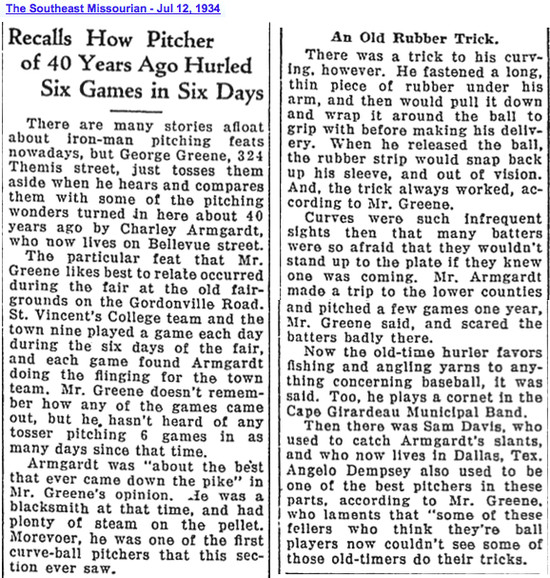