The Daily Republican's 10th Anniversary Edition, published in 1915, features stories about the numerous businesses that were active at that time. Not only do they tell the history of those stores and industries, but they also give the background of the men, and occasionally the women, who made those commercial enterprises prosper.

In addition, the edition outlines the histories of the various villages and towns of Cape Girardeau County. This week's blog presents the town of Whitewater.

THE TOWN OF WHITEWATER, MISSOURI

Whitewater, situated about five miles northwest of Delta on the St. L. I. M. & S. Railroad, was founded in 1866, on lands belonging to William "Uncle Bill" Devore and Linus Sanford. Shell & Albert were the first in the mercantile business, Mr. Albert being John Albert of the J.S. Albert Grocer Company in Cape Girardeau. A short time later "Will" and "Tom" Wheeler opened a store in Whitewater. They were also the first station agents, and were succeeded by A.J. Bean and F.X. Steckler. "Will" Wheeler, the first agent, later became auditor of the Houck systems of railroad at Cape Girardeau. Miles Ax, once merchant at Cape Girardeau, succeeded Shell & Albert, the first merchants. S.M. McAnally succeeded Miles Ax, but closed out his stock of goods shortly afterwards.

Excepting the railroad station there was little business done in Whitewater after that for some time, and the trade became diverted to nearby points. In 1877 P.N. O'Brien, formerly of Cape Girardeau, entered the mercantile trade in Whitewater and drew back to the town its lost trade, and had a good business for many years. After the town had been platted and incorporated, it developed faster. Mr. O'Brien was its first mayor, and its postmaster for nearly a quarter of a century. The town now has a population of about 350, a number of stores, bank, flour mill, block factory, poultry house, two hotels, good school, churches, and is a nice clean town, healthy and moral, prosperous and thriving.

P.N. O'Brien, pioneer citizen and merchant of Whitewater, was born in St. Louis in 1851, and is the son of Mr. and Mrs. Laurence O'Brien. When two years old he came to Cape Girardeau with his parents, and his father engaged in merchandising in Cape Girardeau, first in the "Justi" building, and later in the "Painter Block." In 1887 P.N. O'Brien began to operate a general store in his own name in Whitewater, and for many years conducted that business with great success. He held the offices of postmaster and mayor.

Thirty-four years later, the Southeast Missourian newspaper published an aerial of Whitewater, as well as an article that gave more history of the town. 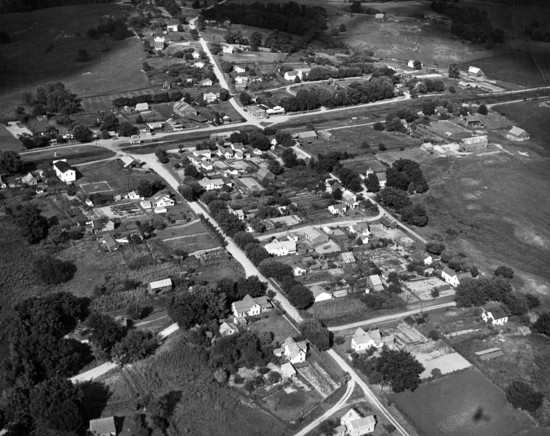 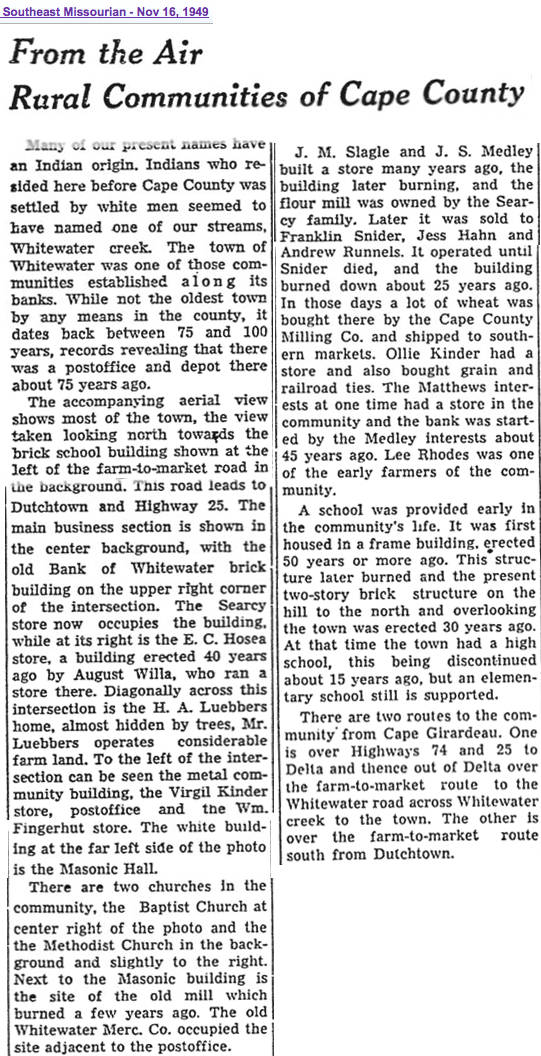