10th Anniversary Edition: A lumber yard, a mercantile and a meat market

What do the Henderson Lumber Yard, Heinberg's Mercantile and the Mueller Meat Market have in common? Two things, at least: All were located in Jackson in 1915 and all were featured in the Southeast Missourian's 10th Anniversary Edition. 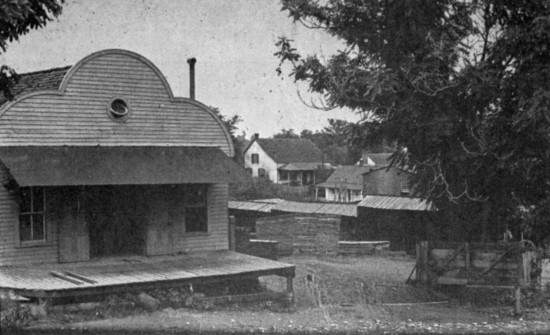 (Charles W. Henderson's Lumber Yard Office. The photograph was taken from a souvenir booklet published about 1900.)

He has served as county surveyor several terms, as president of the Board of Education several years, is now vice president of the Cape County Savings Bank, president of the Jackson Commercial Club, holds stock in several other banking houses and other business enterprises, owns and operates 600 acres of fine farm land in the south end of this county, and is interested in the development of other lands in Southeast Missouri. But his main offices are situated in Jackson, where he operates a lumber yard, in which a full line of building material is handled. This business was established by Mr. Henderson and R.C. Kneibert in the year 1889, under the firm name of Kneibert & Henderson, but in 1901 Mr. Kneibert retired and sold his interest in the business to Mr. Henderson. In 1913 he bought out the only other lumber business in the city of Jackson, and has since that time been conducting the only lumber yard in town. He handles all kinds of lumber, sash, doors, cement, lime, galvanized iron roofing, the American Field Fence.

Coming to Jackson in 1882 he accepted a position i the office of the county clerk, and shortly afterwards was made deputy assessor. In 1884 he was elected county surveyor and held that position for several terms to the satisfaction of his constituents and the public generally. Quitting official life he centered all his energies on his business, with the result that the same grew to large proportions, and he became a power in the business life of his home city and county.

In the year 1885, on the 25th day of October, he was united in marriage with Carrie Klein, and they are the parents of five children: John R., Charles W., Hazel E., Amy Nell, and Mabel Carrie. Having himself been a great reader and good scholar all his life, he insisted that his children receive a thorough education. The family lives in a modern home on Russell Avenue, and all are members of the Presbyterian church, of which Mr. Henderson is one of the staunchest supporters. Politically, Mr. Henderson has always been a Democrat, but has liberal views on this subject. He is a member of the Jackson Excelsior Lodge, A., F. and A.M.

As president of the Commercial Club and a believer in the future of Jackson, he is a live wire in the affairs of the city, and is ever ready to lend assistance in any improvement project that may be of value, provided the same will benefit the citizens of Jackson and Cape Girardeau County. Believing also in the future of Southeast Missouri, he has invested extensively in farm land.

He is genial and hard working, and an amiable gentleman in every sense of the word, and counts his friends by the thousands. His employees all have for him the highest regard and the most sincere love and respe3ct. He is to them an ideal employer and takes an interest in their welfare.

He adopts the old maxim that has never yet failed of practical results, and which is to "plow deep while sluggards sleep and you will have corn to sell and keep." He is as modest in speech as he is in manner, knowing that it is not the great revolving visible wheel that moves the machinery of the world, but the subtle compressed vapor at the end of the piston rod, or the hidden electric spark in the dynamo. He has built up a fortune on the rock foundation rather than upon the treacherous bed of quicksand, so that he is honored more for his personality than for the dollars in his possession. 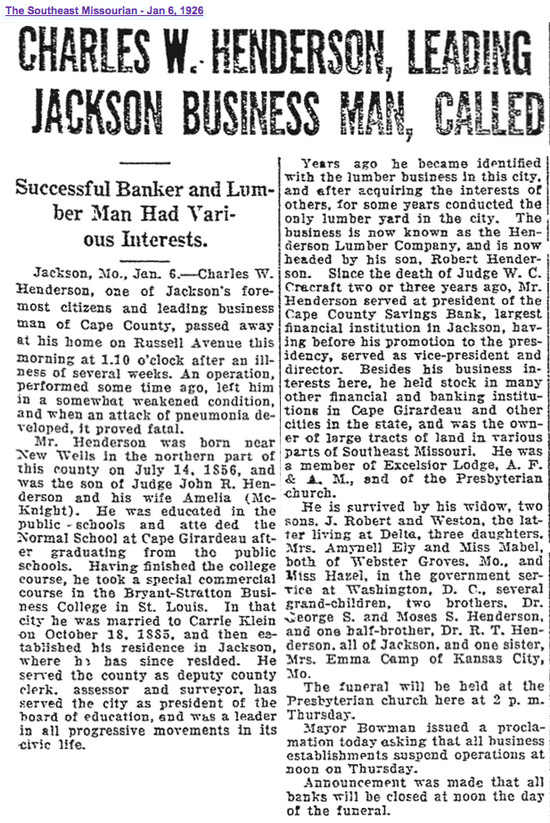 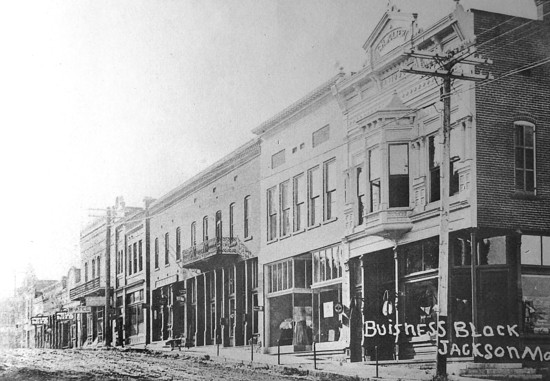 (The Heinberg mercantile store was the second building from the right in this photograph.)

There are two ways in which a young man may get into business for himself. One way is to secure a business already established, and the other way is by establishing a business. The latter by far the most difficult and requires a much greater amount of pluck and energy than the former. A business already established will naturally continue, and the change of ownership may not effect its prestige or trade. When, however, a new business is established, there are no old customers to rely upon, and you have no old records to go by.

The foregoing is but preparatory, or rather, introductory, for the sketch we now wish to present.

John G. Heinberg is a native of Cape Girardeau, having been born in that city on the 10th day of September, 1871, and is the son of Henry and Marla M. (Schoenberg) Heinberg. He began his education in the public schools of his native city and finished the same in the Normal at the same place, and then became a teacher. In 1891 Mr. Heinberg became a clerk in the Flentge & Wood mercantile establishment, and later opened a store under the firm name of Snider & Heinberg. All this activity happened in Cape Girardeau and Jackson. In 1894 the later firm dissolved and Mr. Heinberg moved to Cape Girardeau and entered into partnership with E.W. Flentge under the name of Flentge & Heinberg. In 1897 he sold out his interest and returned to Jackson and became an employee of Judge William B. Schaefer in a general store on Main Street. During the year 1906 he associated with him L.C. Hoffmeister and established another general merchandising business in Jackson under the name Hoffmeister & Heinberg, but on Feb. 15, 1908, this partnership was dissolved, and Mr. Heinberg established his present business, in which he has visibly prospered. In his well-lighted store room, 30x80 feet, he keeps a scrupulously clean stock of dry goods, shoes, ladies' ready-to wear clothing, gents' furnishings, clothing, and groceries, everything latest styles and best qualities. His slogan is "The Place Where You Can Do Better." He is a hard worker, always on the job attending to business. Starting with practically nothing, he has now one of the best-going establishments in the country. During leisure hours, he and his family find recreation in taking a spin in their fine touring car.

John G. Heinberg was united in marriage with Annie C. Wessell on the 14th day of June, 1894, and they have one son, John Gilbert, and one daughter, Mildred. The family lives in a modern home on First East Street, the property of Mr. Heinberg, and all are members of the Methodist church, in which Mr. Heinberg has held several offices of honor. He is also a member of the Commercial Club, and the Knights and Ladies of Security.

Politically, Mr. Heinberg adheres to the principles of the Progressive party, and is considered the leader of that party in Cape Girardeau County. He also takes a very active part in the fight to abolish the liquor traffic in the county and state. 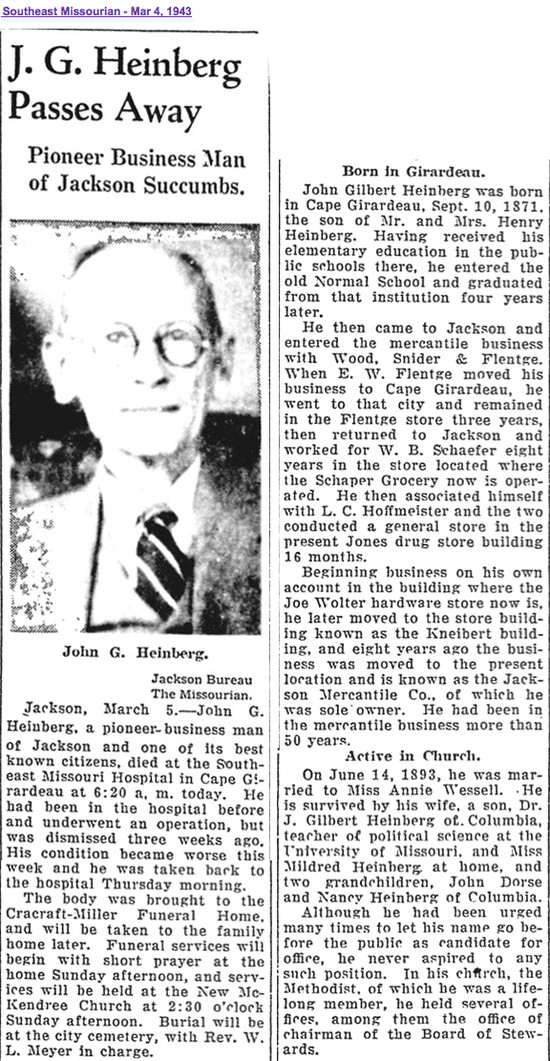 The meat market of H.H. Mueller is located on the south side of the public square in Jackson. It is a good place to buy meats and meat products, for it is one of the most sanitary places of its kind in Cape Girardeau County. Mr. Mueller sells only home killed meats and makes the sausages which he sells and renders the lard, in fact, his plant is the most complete in Southeast Missouri. He does a big business and is one of the most prosperous in his line in this part of the country. He knows exactly what his patrons want, and they are absolutely assured or receiving only the best products at the most reasonable prices when they deal with Mr. Mueller.

H.H. Mueller was born in Hermsdorf, State of Saxony, in Germany, on Aug. 2, 1857, and came to the land of the free with his parents, Henry and Henrietta (Taeger) Mueller in 1868. Having attended public schools in the Fatherland, he continued his studies in a night school in Cape Girardeau. The death of his parents in 1870 left him practically without resources, and he took employment in a general merchandise firm in Cape Girardeau, that of Julius Vasterling, and made his home with the family of Mr. Vasterling until he attained his majority, and became shipping and receiving clerk for S. Albert, which position he held until 1882, when he began a grocery and packing business, in company with Henry Meystedt, under the firm name of H.H. Mueller & Co., in Cape Girardeau. In 1884 he severed his interests from that of his partner and moved to Jackson, opening a wholesale packing business on a small scale, to which he added a retail shop in 1886, and has conducted both here in Jackson since that time, increasing his business from year to year until he now does tens of thousands of dollars' worth of business each year, and has two branches in Cape Girardeau, which represent an investment of about $40,000, and are up-to-date in every imaginable way. Through his wholesale department, which is under his personal supervision, he sells his products all over the state of Missouri. His cured meats, lard and sausage have a reputation wherever they appear on the market. He employs from 15 to 20 men all the time and sometimes many more. He buys his stock in a radius of 20 miles of Jackson. He is a hard worker, on he job all the time, day and night, and thoroughly familiar with every detail of his business. There is not any kind of work in any of his plants that he could not do himself successfully if necessary.

On June 25, 1882, he was married to Ida Brass, and nine children are the result of this union. They are: Albert H., Hugo J., Herman H., Adolph W. Paul A. Henry E., Clara C., Henrietta L., and Julia L. Three of the sons are married and have homes of their own, while the others still live with their parents in one of the largest homes in Jackson on East Main Street, castle-like in appearance and in surroundings, a mansion indeed, beautiful in architecture and generous in proportions. Here the family entertains lavishly, and the Mueller house is seldom without house guests. All the sons are thoroughly trained in their father's business and are hustlers just like he is, but had the good fortune to have an intelligent father that gave them an opportunity to obtain a good education.

Mr. Mueller finds time to serve his fellow citizens as city alderman, is stockholder and direction in the People's National Bank, and owns some of the stock of the First National Bank in Cape Girardeau, and the Cape County Savings Bank in Jackson. He is an active member of the Jackson Commercial Club and the Elks Lodge of Cape Girardeau. His name stands pre-eminent among those of the big men of Cape Girardeau County.

Politically he is a Democrat, but has long since come to the conclusion that it does not pay to fool with politics much, and is therefore not very active in politics. 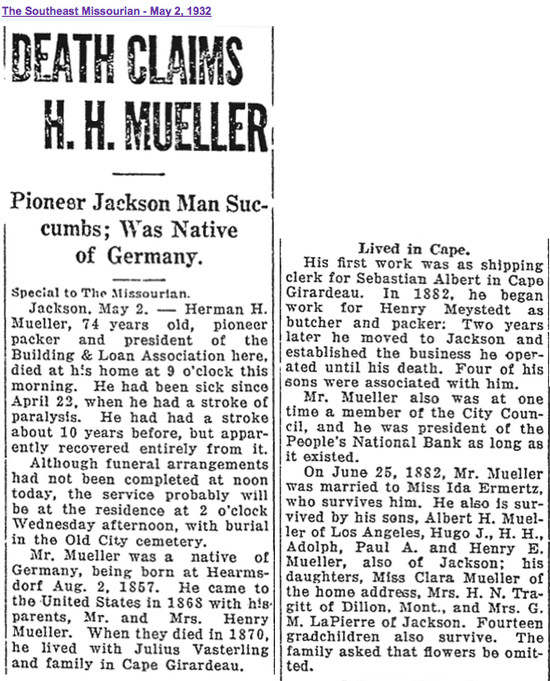