The Southeast Missourian's 10th Anniversary edition contains numerous short biographies of businessmen from Cape Girardeau County. Most of these have portraits, but they have proven rather difficult to scan.

I thought I would combine several of these bios into this blog. Where possible, I'll include photos.

Starting things off is 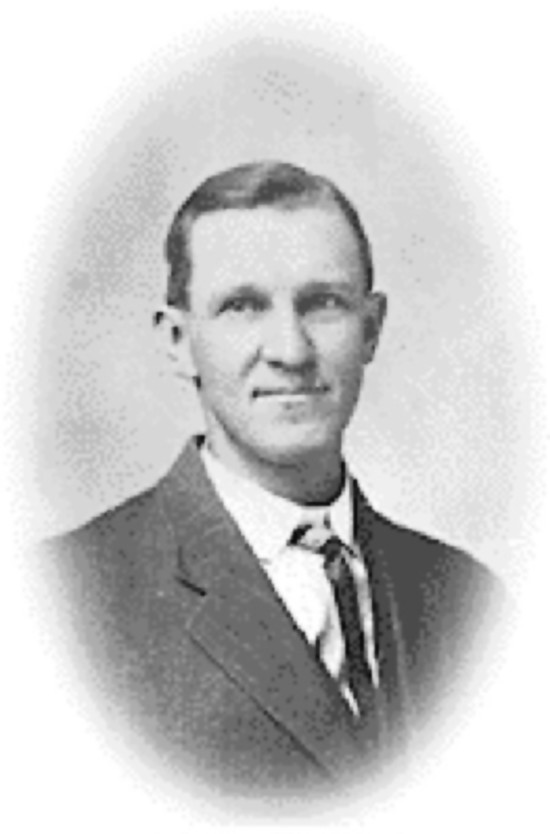 An enterprising and progressive young business man is Linus Penzel, building contractor, West Main Street (in Jackson), where he does all kinds of millwork. He does contract work within a radius of 20 miles of Jackson, and has built some of the finest homes in this city, such as C.H. Wolter's, Mrs. Elizabeth Kerstner's, and others. He brought the first gasoline-power concrete mixer to Jackson, and uses it extensively in his work as builder of sidewalks and concrete culverts, also in constructing foundations for buildings. He employs 10 to 15 men nearly all the time.

Linus Penzel was born on the 9th of August, 1879, the son of Gustav and Caroline (Brennecke) Penzel, and received his education in the Jackson public schools and high school. After leaving school he became an apprentice under his father, who is also a contractor, and in 1908 went to San Antonio, Texas, where he conducted a contracting business for two years. He then traveled in the West and South, stopping here and there at his trade, but returned to Jackson during the year 1910, and established his present business.

On Dec. 25, 1907, Mr. Penzel was married to Matilda Kies, and has now three children, one son, Carl L., and two daughters, Margaret M. and Miriam L. The family affiliates with the Evangelical church, and Mr. Penzel is an ardent Republican. He is one of the young men of Jackson that have made good. A self-made man in the truest sense of the word, he owes his success to no one but himself. 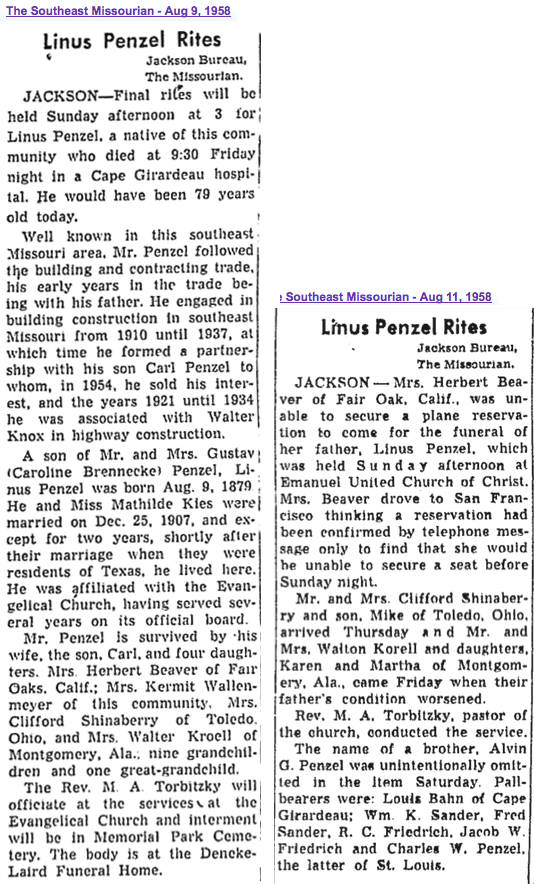 Col. W.L. Mabrey, proprietor of this well-known real estate business, with offices located on the west side of the public square in Jackson, was born on Nov. 8, 1875, in Cape Girardeau County, the son of Robert and Elizabeth (Proffer) Mabrey. He attended the public schools and the Jackson Military Academy, and in 1898 joined the Army and served in Cuba and Porto Rico on the non-commissioned regimental staff. Discharged in 1899, he came to Jackson and was employed by the Cape County Milling Company as manager of the Burfordville Mills; was later transferred in a similar capacity to another plant of the Cape County Milling Company in Oak Ridge, and finally became manager of the Jackson plant. In 1907 he resigned to accept the position of deputy in the office of the County Clerk, where he remained seven years, or until 1913, when he organized the above real estate company. He was united in marriage with Kate Pepper on the 29th day of June, 1904. They are the parents of two daughters, Glenda and Doris. Mrs. Mabrey is an accomplished musician, and holds the responsible position of organist in the McKendree Methodist Church, where she presides over the magnificent pipe organ in that edifice at all services.

Col. Mabrey has all of his life been deeply interested in things military, and worked his way up from a private in Company "F," Sixth Regiment, National Guard Missouri, to the rank of colonel of his regiment. During his service in the regular Army in the southland, and by attending regularly the encampments of the military in this section of the country, he has acquired a good deal of knowledge in that line, and has the widest acquaintance in military circles in his and adjoining states.

In private life he devotes all his time to his office, buys and sells real estate. His knowledge of the business and his wide acquaintance among Cape Girardeau County property owners proved of great assistance, and he has rapidly built up a lucrative business. He is a great believer in a bright future for Southeast Missouri generally, and of Cape Girardeau County in particular, and is doing all in his power to induce immigration from the Easter states to Missouri. He keeps continuously a list of choice farms and city property for sale, and has made some deals of considerable proportions. He makes a specialty of farm land, and is constantly in communication with prospective buyers in the East, where people leave the worn out farms to come to the garden spot of the United States, to Southeast Missouri.

Politically, the Colonel is an advocate of the principles of the Republican party, and has repeatedly been chosen chairman of the Cape Girardeau County Republican Central Committee, and holds that office at present. His generalship in this position was again proven at the last election, when each and every candidate on the Republican county ticket was elected with a handsome majority after a most strenuous campaign. He delights in political work.

Colonel Mabrey and his family live on North High Street in residence property of their own, and are quite prominent socially. 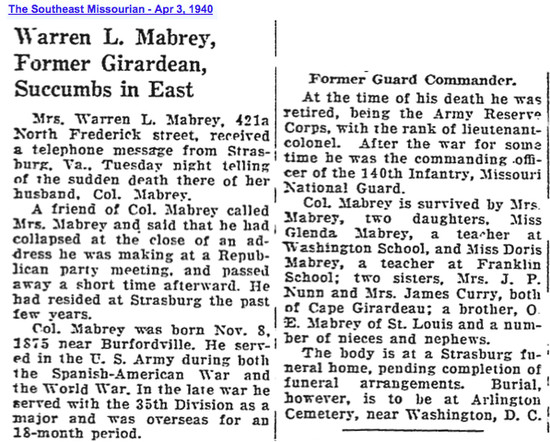 The business of abstracting and guaranteeing of titles requires competency and careful scrutiny of all records which may have bearing on the title to the property i9n question or to be transferred from one person to another. Its importance to residents of Cape Girardeau County, Missouri, was early recognized, and several men have engaged in abstract work at various times. But the first set of abstract books, of which the Cape County Abstract Company is the owner, and the only set in Cape Girardeau County, and they are complete, and was finished only a few days ago. In the year 1908 this company became the owner of said books, and its office is as complete as any in the state. The volume of business has become so great that a branch office was established in Cape Girardeau. The Cape County Abstract Company is a member of the Missouri Abstract Association and the American Association of Title Men. Its capital stock is $25,000. W.H. Stubblefield, president of the Sturdivant Bank at Cape Girardeau, is its president, and H.D. Rodgers is vice-president, while John M. Shields is its effective general manager and secretary-treasurer.

John M. Shields was Potosi, Mo., on July 16, 1885, his parents being James A. and Julia (Nichols) Shields. Mr. Shields was educated in the Potosi public schools and in the Moothart Business College, after which he was employed in the abstract business which his father conducted in Potosi, and also in other abstract offices, and in 1913 he came to Jackson, bought stock in the Cape County Abstract Company and became one of its officers, as mentioned above. He has spent practically all his life in abstract work and is regarded an expert in this line.

His knowledge of law as regards title, probate matters, title analysis, dower rights, land description and all matters concerning real estate, is recognized by the legal fraternity of the county, as well as the courts. An abstract guaranteed by him and backed by the reputation of the Cape County Abstract Company, will pass in any court in the land. He has systematized the work of his office so perfectly that the completion of any kind of an abstract is a matter of only a short time. The books are kept up all the time, and all real estate transfers are transferred to them as soon as recorded.

In politics Mr. Shields is a loyal Democrat. His only hobby is his work.