The Southeast Missourian's 10th Anniversary Edition, which we have been examining in this space over the past few weeks, contains numerous articles, long and short.

One of the shortest concerns Jackson's Central Hotel. Its proprietor at the time was Adolph Tommack, one of a long list of operators and/or owners of the hostelry. 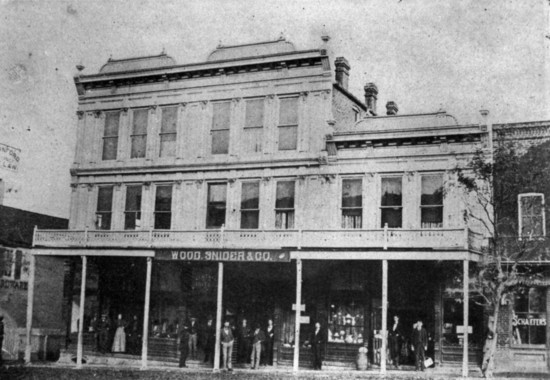 The Central Hotel was established many years ago, and has always been regarded as Jackson's leading hotel; in fact, it is today one of the best in Southeast Missouri. All its large and commodious rooms are steam heated, and the establishment is equipped with baths and is modern and up-to-date in every way. The hotel is a three-story brick building located on the north side of Main Street near the public square. It is liberally patronized by the commercial travelers and is regarded by them as one of the best on their route, a special attraction being the products of the splendid kitchen, which is under the personal supervision of the proprietor, Mr. Tommack.

Adolph Tommack is a native of Germany, and was born at Guben in that country on the 17th day of March, 1868, a son of August and Elizabeth (Richter) Tommack. Having finished his education in the public schools, he served his time as a baker's apprentice, and then traveled extensively. In 1891 he landed in the United States, and located in Chicago, where he worked in a hotel in every capacity in the kitchen, later becoming chef of the hotel. He then launched a restaurant business in Chicago, later conducted a hotel in Spring Valley, and still later one in Viola, Ill. In 1913 he bought the Central Hotel in Jackson, and has been its proprietor since that time.

He was married to Cordelia Henderson on Oct. 17, 1898, and Mrs. Tommack is an ideal landlady. Mr. Tommack is a Republican, but not a fanatical partisan.

Missourian clippings indicate the hotel was built in the 1890s by Tom Bast. But as I mentioned above, it went through a lot of hands over the years, including:

* Oliver B. Kinder, who purchased the hotel in 1909 from the Kamp heirs.

* The Peoples Bank, which bought the building the following year with the intention of making extensive improvements, including the installation of new heating and plumbing systems.

* J. Vaughn Priest acquired the hotel from Mike Owen in 1911, and he in turn sold it to H.G. Tait of St. Louis in 1912. This transaction apparently met with some difficulty, as Priest ended up owning the Central again. A 1912 clipping indicates the fixtures of the hotel were sold under chattel mortgage, apparently to satisfy a debt.

* Priest finally unloaded the business in 1913, selling it to the above mentioned Adolph Tommack. The newspaper at the time noted "the popular hostelry has changed hands with kaleidoscopic rapidity of late."

* Tommack and his wife soon had enough of inn-keeping and by May 1917 had sold the furniture "and all that belongs to him in the way of paraphernalia in the hotel to the Peoples National Bank," owner of the building that housed the hotel. The Tommacks moved back to Chicago, and the bank began looking for a new hotel manager.

* G.O. Smith purchased the Central in March 1922 from a Mrs. Burford. And it was just a year later that tragedy struck. A fire consumed the the Central Hotel on March 1, 1923. 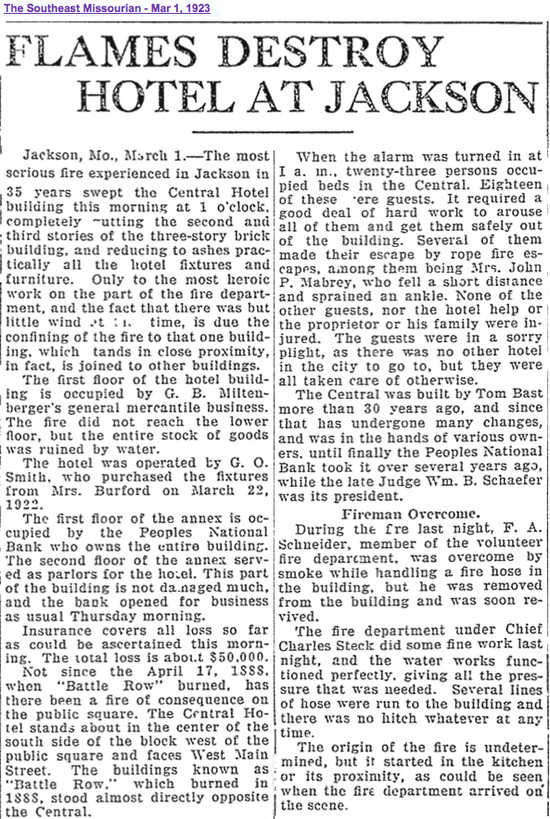 It's interesting to note that Mrs. John P. Mabrey, who suffered a sprained ankle when she made her escape from the burning structure, had just moved into the hotel with her husband a month prior to the fire. A clipping published several days after the fire remarked that she was still suffering considerably from her ankle injury and nervousness. It explained in more detail how she was hurt using a rope fire escape: "Mrs. J.P. Mabrey... and her husband escaped the burning building in their night clothes. Mrs. Mabrey's hold was broken by a knot in the rope, and she fell onto the top of the porch in front of the hotel."

The Peoples National Bank soon had workers tearing down the remains of the old hotel, to be replaced quickly by a first-class hostelry. The space in which the Miltenberger mercantile was located would house an office, sample room, parlors, lobby, dining room and kitchen; the three floors above would be used for guest rooms.

When it was completed in November 1923, the hotel's name was changed to the Hotel Jackson. It opened with a banquet and dance on Nov. 26, 1923.