One of the longest articles in The Daily Republican's 10th Anniversary Edition, published in 1915, was devoted to the Exchange Bank of Cape Girardeau.

It required a whole page in the publication and included photographs of the bank and its officers. 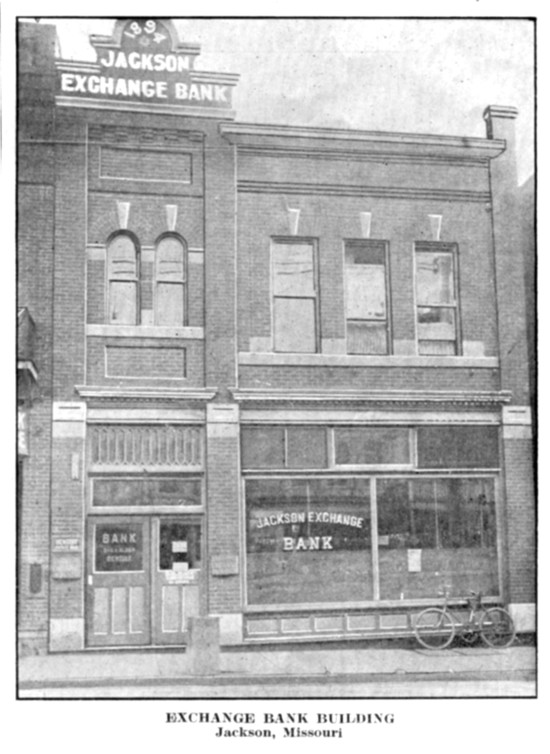 This bank, only 20 years old, has the reputation of being as solid financially as the Rock of Gibraltar is physically. Organized in 1894, it occupied a leased building on the west side of the public square in Jackson, but these quarters soon became too small, and in 1902 the institution moved to its own modern building on the south side of Main Street, less than a block from its old location. The integrity of its officers and their conservative management of its affairs by them, has won the confidence of the public in a remarkable degree. While the capital stock is only $25,000, there are entrusted to it at the present time about $100,000 in deposits, and its surplus funds amount to $10,000, undivided profits $5,239.04. The banking house itself is listed at $8,000, which is a very conservative estimate. Absolute safety and all accommodations conservative with good banking are the principles under which this bank is being conducted, and under which it enjoys its liberal share of the patronage of the public.

Its officers are beyond all reproach and have the utmost confidence of the depositors. Their far-reaching business sense and talent has proven repeatedly that the Jackson Exchange Bank is one of those banking houses that can be relied upon to come through any flurry in the financial world unscathed and with banners flying. Hence its popularity and success. 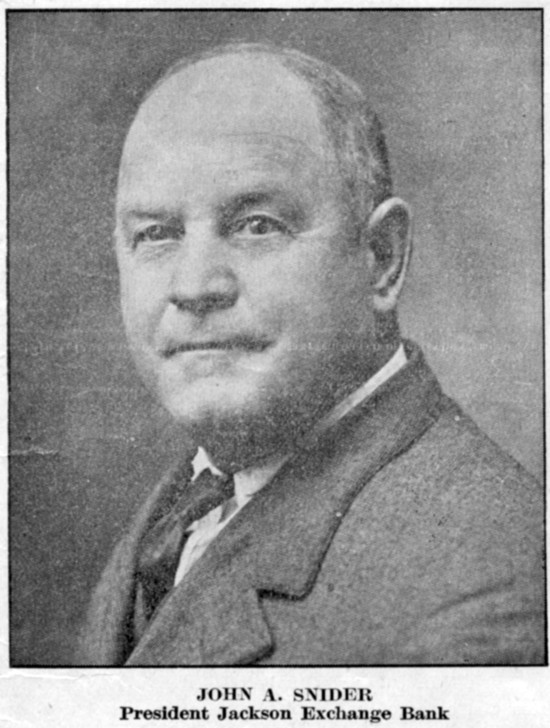 John A. Snider, the president of the Jackson Exchange Bank, was born on March 7, 1860, in Cape Girardeau County, the son of George W. and Katheryn (Edinger) Snider. While very young he attended the public schools and received a thorough education so far as that institution would go at that time; then he became a student in the Southeast Normal at Cape Girardeau, and then in the law department of the Missouri University in Columbia, from which he graduated and was admitted to the bar in 1885. From the time of his admittance to the bar in 1885 until the present day he has been an active member of the Cape Girardeau County bar.

In 1906 he bought stock in the Jackson Exchange Bank, was elected vice-president of that institution. IN 1907 he became president thereof and still occupies that office today. He owns about 800 acres of fine farm land in Cape Girardeau County and personally supervises the operation thereof, making a specialty of feeding cattle, and cattle of good blood. Farming is his hobby, but he does not let that interfere with his extensive legal practice, which takes him to all courts in the land. His landed interests lie within 15 miles of Jackson, and he visits his farms as often as possible, making the trips per auto.

He is married to Mary E. Stevens-Cofer, and their residence on Russell Avenue is among the best in the city. Dividing his time between his duties as president of the bank, his law practice and his farming interests, keeps him pretty busy, but he finds time to take an active part in all public affairs and in politics, where he is a very ardent Republican. He is considered wealthy, and an all-'round good fellow. Socially he is a member of the Masonic and the Woodmen lodges.

Everybody knows "Bluch," the vice-president of the Jackson Exchange Bank, County Clerk-elect, and one of the rising men of Cape Girardeau County. Born on April 14, 1868, the son of Henry and Margareth (Knott) Sperling, he received his education in the public schools. He first took employment in one of the flour mills in his home town, Jackson, where he worked six years, until ill health compelled him to resign. He was assigned to one of the cooper shops and worked there 11 years. Then he began to work as clerk in the office of the recorder and circuit clerk in 1895, later did some work in an abstract office, and was appointed Deputy U.S. Revenue Collector, which office he resigned in 1914, and successfully made the race for the office of Clerk of the County Court, making the race on the Republican ticket.

During the year 1912, on the 6th day of March, he was united in marriage with Sarah D. Baldwin, and the couple live happily in a nice cottage in the city of Jackson. Mr Sperling is considered one of the most careful and prudent financiers in Cape Girardeau County, and owns stock in the Jackson Exchange Bank, of which he is one of the directors and its vice-president, and also holds stock in the Bank of Pocahontas and a good deal of real estate in his home city. 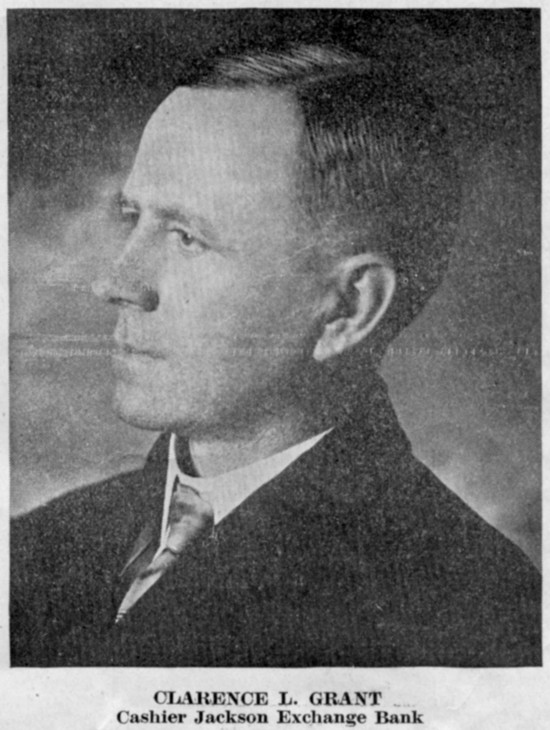 Clarence L. Grant, cashier of the Jackson Exchange Bank, is the son of A.H. and Harriet F. (Kent) Grant, and was born in Bollinger County on Aug. 29, 1874. Having attended public school and the William Jewell College, he began his business career as Deputy County Collector, and then became an assistant postmaster in Cape Girardeau. In 1899, after the death of his father, he took charge of his father's interests in a mercantile establishment, and subsequently became owner of these interests. In 1804 he was elected Collector of Revenue of Cape Girardeau County, and held the office six years when he accepted the office of cashier of the banking house above mentioned and still holds that position with credit to himself and to the benefit of the bank. He also retains his interest in the store inherited from his father; also owns residence property in Jackson and a farm of 80 acres near Jackson. He is a member of the Baptist church and one of the leading members thereof, and finds pleasure and recreation in the home with his family, which, to take on a spin in his auto, is one of his chief delights.

He was married on the third day of January, 1900, to Irene Taylor of Cape Girardeau, and they are the parents of three sons, Clarence Wesley, Joseph A., and Robert K., and one daughter, Irene Virginia. He is a Mason, a Woodman and a Maccabee. The book store of Grant and Graef, of which C.L. Grant is the senior member, has an enviable reputation throughout the county. Only 40 years old, Mr. Grant seems to be destined to become one of the foremost citizens of his county.

The assistant cashier of the Jackson Exchange Bank, was born in Jackson on Nov. 20, 1878, son of William and Carolina (Altenthal) Wagner. He attended Evangelical parochial school and the Jackson public schools, and then began to work in a general merchandise establishment, where he remained until 1907, when he was chosen as assistant cashier of the above bank and still retains that position, and a more painstaking official never had charge of the books of any financial institution that Louis F. Wagner, the assistant cashier of this bank. He will work day and night to keep up his work, and cannot rest until everything is in first class shape. He was honored by his fellow citizens with the election to the office of City Collector several times, and holds that office now. He was married to Hester Peterman on the 11th day of April, 1901, and one daughter, Daisy L., has blessed the union. Mr. Wagner is a member of the Evangelical church, of the Modern Woodmen lodge, and is a Republican.

Was born in Cape Girardeau County on the 17th day of February, 1851, and is the son of Henry and Auguste (Sprengel) Wagner. He operated the Wagner bakery in this city for several years, but in 1906 turned the business over to his sons, William Jr., and Martin H. He owns residence property and is in good circumstances financially, and well known and liked by all his acquaintances.

Dealer in livestock, making a specialty of buying and shipping hogs, sheep and cattle, is one of Jackson's influential citizens. He lives in Jackson, but is the owner of quite a lot of farm property.

Besides his landed interests, Mr. Daugherty owns stock in the Jackson Exchange Bank, and is one of its directors.