Returning once more to The Daily Republican's 10th Anniversary Edition, published in 1915, we take a look at a brief history of newspapering at Jackson, as well as the county seat's "splendid churches." 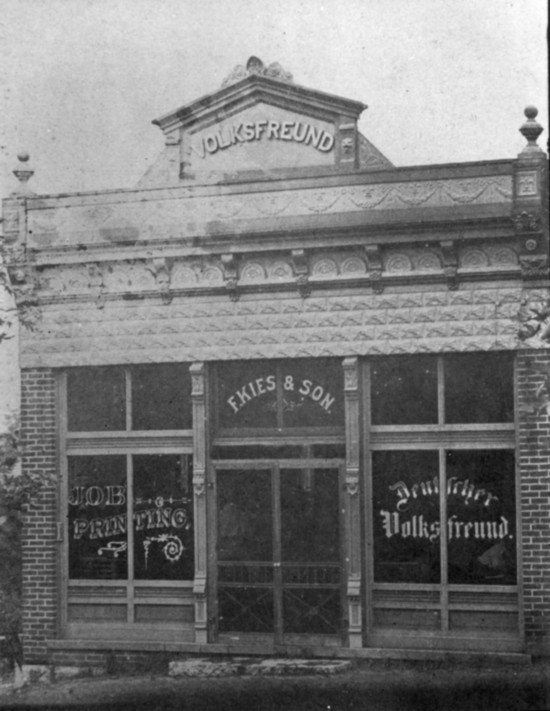 JACKSON NEWSPAPERS AMONG THE OLDEST

The first printing press in Jackson was set up in 1819 by T.E. Strange for the "Missouri Herald." He was succeeded by James Russell, who changed the name to the "Independent Patriot." It was a medium-sized, five-column folio, and for a little frontier town was a very creditable paper. Mr. Russell sold the office to William Johnson, who published the Jackson "Mercury" and the Cape Girardeau "Farmer." He continued it until March, 1831, when he sold out to G.W. Davis and R.W. Renfroe, who, three years later, removed the press and office material to Rushville, Ill. Under their management the paper was known as the Jackson "Eagle." About that time the "Southern Democrat" was removed from Cape Girardeau to Jackson, and was edited and published by Robert Brown until January, 1845. It was a six-column folio, and was a strong advocate of democracy. Its successor was the "Review," also a democratic sheet, published by Niedner & McFerron.

The next newspaper established was the "Southern Democrat," the first number of which appeared on Dec. 21, 1849. Its name implies its politics. Its motto was, "The Constitution in its purity -- the bulwark of American liberty." It was edited and published by J.W. Limbaugh, until his death in 1852. The name was then changed to the "Jeffersonian," and as such was published until November, 1853, when it was succeeded by the Jackson "Courier," Joel Wilkinson, editor and proprietor. This was the last newspaper published in Jackson prior to the Civil War.

The "Missouri Cash Book" was established in 1871, the first number appearing on Aug. 4, 1871. It was founded by W.L. Malone, who continued its publication until June, 1875. It was then conducted by the Cash Book Publishing and Printing Company until the following November, when it was purchased by F.D. Hampton, who died one year later. It was then published by A.S. Coker and Coker & Honey until January, 1882, at which time F.A. McGuire purchased Coker's interest. In June 1883, McGuire became the sole proprietor, and the "Cash Book" has since been under his management.

On March 11, 1886, Fred Kies began the publication of the "Deutscher Volksfreund," a weekly newspaper printed in the German language, which he continued until his retirement, when his sons, F.E. and J.G., took the paper over and later added the "Jackson Items," another weekly, but printed in the English language. These publishers have a fine outfit and are well equipped for job work of all kinds.

"The Comet," another weekly, was published for some time in Jackson by various owners and editors. It's name was changed to the "Jackson Herald," and it was transferred to Cape Girardeau a few years ago.

JACKSON IS PROUD OF ITS SPLENDID CHURCHES

The first Baptists to make a permanent home west of the Mississippi River were Thomas Bull and his wife, and the mother of the latter, Mrs. Lee, who located in Cape Girardeau District, about one and one-half miles south of Jackson, in the year 1796. The following year Enos Randol and his wife, and the wife of John Abernathy, also Baptists, arrived. A year or two later the Rev. Thomas Johnson, a Baptist preacher, who had been a missionary among the Cherokees in Georgia, came to visit his friends in Cape Girardeau District, and while there he baptized Mrs. Agnes Ballew in Randol Creek. This was doubtless the first protestant baptism west of the Mississippi. Mr. Johnson could not, under the then existing government, organize a church, but in 1805 the Rev. David Greene, a native of Virginia, who had preached in the Carolinas, but was then a resident of Kentucky, came to Upper Louisiana to preach to some of his former parishioners who had settled in Tywappity Bottom, and there organized a church. The congregation, however, numbered only some half dozen members and soon disbanded. The Rev. Greene continued preaching among the various settlements, and, finding the field a promising one, he removed his family to Cape Girardeau District, where, in 1809, he died.

On July 19, 1806, Mr. Greene organized Bethel Baptist Church at the house of Thomas Bull. The members were Thomas English, Jane English, Leanna Greene, Agnes Ballew, William Smith, Thomas Bull, Edward Spears, Anderson Rogers, John Hitt, Clara Abernathy, Catherine Anderson, Rebecca Randol, Francis Hitt and William Mathews. On Oct. 11, 1806, the congregation resolved to erect a house of worship, which resolution was put in effect as soon as possible. A small log structure was completed on the farm of Thomas Bull, but it proved to be too small, and in 1812 was replaced by a hewn-log building, which was wrecked only a few years ago.

The membership was now 80, and one year later it increased to 186. In June, 1814, 45 members were dismissed to organize a church in what is now St. Francois County, but even after this dismissal there remained 173 members. In 1809 Bethel Church was received into Red River Association, which met at Old Red River Church near Clarksville, Tennessee. It remained a member of this association until 1816, when it was decided to form a new association of the churches of Missouri. On the second Sabbath in June, 1816, a convention was held at Bethel Church, and the organization of Bethel Association was consummated. In 1824 nine churches were dismissed from Bethel Association, and on June 12, that year, a convention met at Hebron Church to perfect and form the Cape Girardeau Association. Hebron Church was located near what is now the County Poor Farm of Cape Girardeau County, In 1840 there was a division of the churches over the question of missions, and a new Cape Girardeau Association was formed as in opposition to the Cape Girardeau Association of Regular Baptists. The new organization proved the much stronger and is now surviving. It suffered severely during the Civil War, and there was at one time only one minister left in the bounds of the association. It recovered, however, soon after, and in 1876 there were 29 churches reported.

At the time the Bethel Church had been moved to Jackson and a new house of worship had been erected on High Street, which is still in use. 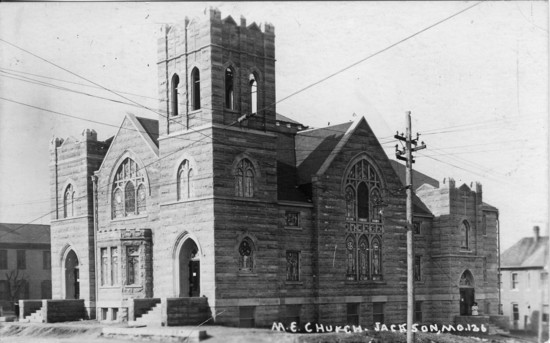 The first Methodist Society west of the Mississippi was organized about three miles east of Jackson, some tie between 1806 and 1809. Among the members were William Williams and wife, John Randol and wife, Thomas Blair, Simon and Isaiah Poe, Charnal Glasscock and the Seeleys. Soon after a house of worship, which, with some alterations, still stands, was built of large hewed poplar logs from 2 to 21/2 feet thick. A camp ground was also established near by (Old McKendree). Between 1840 and 1845 several churches were erected in the district, one of them in Jackson. The trustees at that time were Greer W. Davis, David H. Davis, Caleb Crane, Welton, O'Bannon, Judge John D. Cook, Hiram Gilliland and William D. Randol. The deed for the lot was given by Greer W. Davis in April, 1841, at about which time the church was completed. In 1840 we find the following report from Presiding

Elder Jacob Lanius upon the condition of McKendree Chapel: "Held the first quarterly meeting for Cape Girardeau Circuit at McKendree Chapel, three miles from Jackson. Some good omens." Later: "Held a two days' meeting in the town of Jackson. Here we were compelled to worship in the courthouse, but are erecting a convenient church. Large congregation on Sabbath. This is another hard place. But few Christians and many speculators in religious principles."

In 1854 an educational society at Jackson offered the buildings and grounds belonging to them to the Missouri Conference of the Methodist Episcopal Church, on condition that a good school be established. The offer was accepted and the school put into operation, with encouraging prospects. Wishing to secure permanency and enlargement, application was made to the Legislature for a charter. After considerable discussion the bill came before the House on Feb. 21, 1855, and was rejected by a vote of 60 to 36. The chief reason urged against it was the anti-slavery sentiment of the Methodist Episcopal Church.

Since the war, the Methodist Episcopal Church in Jackson has had a steady growth, and has now a magnificent house of worship on the corner of First South and High streets, with an auditorium large and beautifully furnished. A pipe organ with hydraulic mechanism is installed, and the whole building is modern in every respect. It makes a fine appearance with its art-glass windows and its artistic architecture. 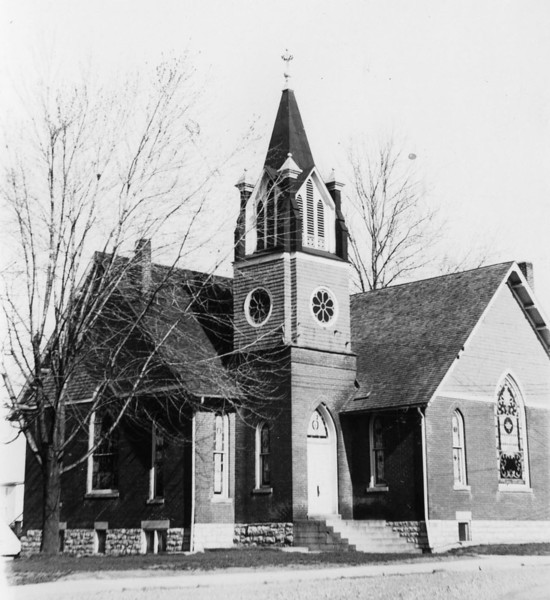 On May 15, 1864, the first Presbyterian Church of Jackson was organized by the Rev. A. Munnson and Ruling Elder R.F. McFerson, who were duly appointed by the Potosi Presbytery for that work.

In 1870 the Rev. W.W. Faris was called as regular pastor. A few years later the first house of worship was dedicated. In 1904 the old building gave way to the handsome structure now occupying the corner of First South and Second West streets. The congregation has enjoyed a healthy growth and now has a strong membership. In 1911 the Rev. Lynn F. Ross was called and is doing splendid work.

The German Evangelical Church in Jackson was organized in May, 1867,with 28 members, and the following trustees: Charles Harenberg, Jacob Friederich, Adam Hoffmann and Herman Goyert. the Rev. Fred Kies was employed as the first pastor and remained two or three years. In the erection of a church building the congregation became involved in debt. To add to the embarrassment, internal dissension sprung up, and, in consequence, no regular pastor was employed from 1872 to 1886. Then a reorganization was effected, and the Rev. John Koletscheke employed as pastor. The congregation is now a strong one and the church building is furnished handsomely. The present pastor, the Rev. Herman, is a man of much power and a preacher of considerable ability. 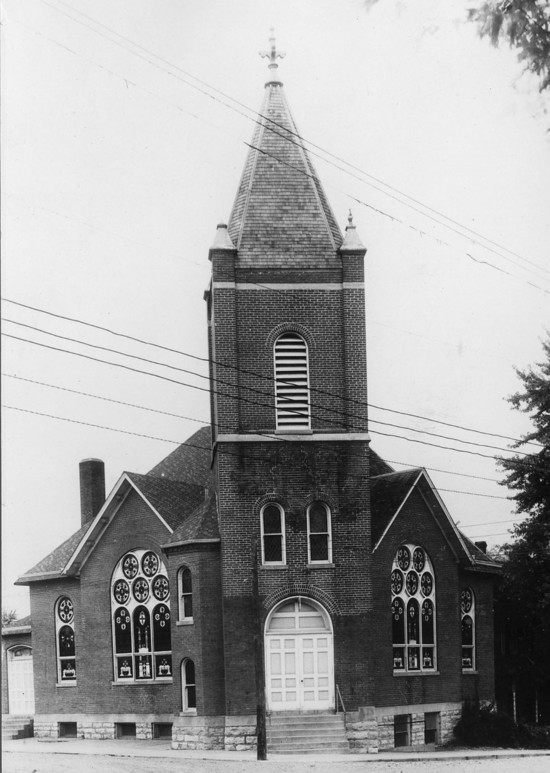 While the Lutheran Church is not one of the oldest in Jackson, it has a splendid record. In about 1890 the Rev. Flachsbart preached the first sermon here, in the old Turner Hall. Later on arrangements were made to hold meetings in the Methodist Church. Then in 1893, under the pastorate of the Rev. C. Rehahn, the present St. Paul's Lutheran congregation was organized. A small frame building was erected, which was dedicated Oct. 1, 1893. The Rev. Aug. Gassner was then called as pastor. The congregation grew steadily and on Sunday, Feb. 23, 1908, the present beautiful church edifice was dedicated by the Rev. W.G. Langehennig, the pastor, assisted by the Rev. A. Wilder of Cape Girardeau. There are few nicer churches in the county, and none with more sincere leaders than the present pastor.

A small congregation, but without a local minister, maintains a house of worship on the corner of First North and First East streets. Several families adhere to that faith, foremost among them being the Sanfords. 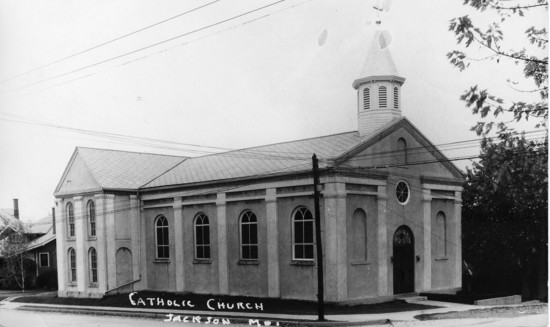 Curiously, a photograph of the Catholic church in Jackson -- Immaculate Conception -- was published in this special edition, but no other information was given. Nor were there any articles about any African-American congregations active in Jackson at that time.