Last week, we started looking at the interesting articles and photos that make up the Missourian's 10th Anniversary Edition.

Published in March 1915, it offers a snapshot of Cape Girardeau County government and commerce a century ago. Several business from Jackson were featured in the edition, including this week's subject. 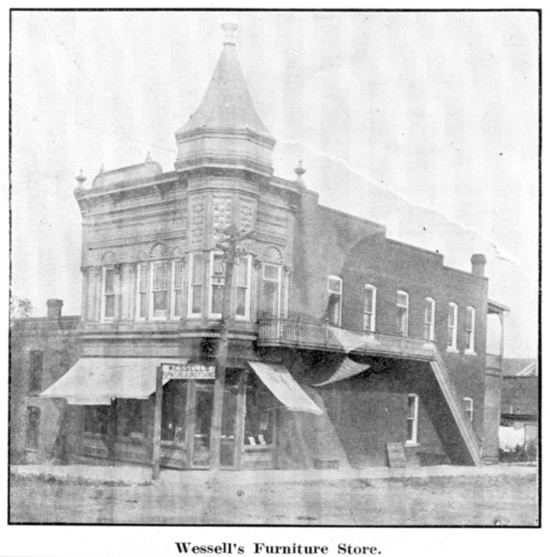 In 1912 William Wessell, Sr., one of the enterprising men in Jackson, opened a small furniture store and repair shop on East Main Street, and his business grew and prospered. Today, Wessell's Furniture Store is one of the leading establishments in Cape Girardeau County, and draws its trade from this and adjoining counties. The firm has two stores on West Main Street now, and a storage room on First West Street. A full line of everything in the furniture line is carried by the firm, and also a complete stock of undertaker's goods and caskets. Every article sold by them is guaranteed to give satisfaction, or your money will be refunded, thereby making satisfied customers and lasting friends, the foundation of all successful enterprises.

The senior member of the above firm was born in Hanover, Germany, on the 15th day of December, 1851, and came to America two years later with his parents, Christian and Matilda Wessell. In his youth he worked as a farm hand on various farms in his neighborhood, and in 1875 began to farm on his own account. Selling his farms in 1885, he moved to Jackson and in 1886 bought out the Priest & Taylor furniture business. This he conducted until 1898, when he sold out and worked at the carpenter's trade until 1912, when he opened the present business. He was married to Matilda Altenthal on the 25th day of November, 1875. Four children survive, William H., Anna, Minnie, and Matilda.

Mr. Wessell has served his home city as alderman, is an ardent Republican and a member of the Evangelical church and the Tribe of Ben Hur. He is still very active and works every day in the store, also keenly enjoys a hunting and fishing trip.

Son of the senior member of the firm and his partner in business, was born in Jackson on Feb. 23, 1882. He attended the Jackson public school, the Cape Girardeau High School, and later attended the school of embalming in Kansas City, graduating there in 1910. He is the only licensed embalmer in Jackson.

He first took employment in a general merchandise establishment and resigned in 1912 to become his father's associate in the furniture business. He is an expert undertaker and up to date and well posted in all detail work of that business. As a citizen he can always be found among the boosters and has something good to say about his home city on every occasion. He is one of Jackson's live-wire young men, and without a doubt has a bright future before him. Politically, William is a staunch Republican and has always been.

He was married to Bernice Davis on April 8, 1903, and they are the proud parents of two children, Joe Davis and Virginia Matilda.

Associated with the Wessells in the furniture business are Ely Abernathy and Jake Kneibert, Jr., both energetic men, who know their business.

William Wessell Sr., died of the infirmities of old age at 91 on March 14, 1943. His obituary, published the next day in the Southeast Missourian, gives a few more details of his life:

"Mr. Wessell was born in Altenrode, Germany, but came to this country when he was about 3 years old. Having lost his parents early in life, he was reared by relatives in Hubble Township. On Nov. 25, 1874, he was married to Mathilda Altehnthal, and the two operated a farm eight years, then came to Jackson, where he engaged in cabinet making, and associated himself with R.C. Kneibert in the furniture business at a place where the Schade Cafe now is located. After that he was in partnership with John Parmenter in his own building, now the Jones Drug Store. He then had a small furniture business in the Hoffmeister building, now the Illers-Hoffmeister grocery store. His son then became his partner in business, and when that partnership was dissolved, he devoted himself to repair work and carpentering. While so engaged at the present county courthouse in 1908, he fell from a scaffold and broke a hip. From that injury he never fully recovered. About eight years ago... he again fell and broke a hip. Since that time he has lived in Cape Girardeau with a daughter.

William Wessell Jr., outlived his father by just under two years, dying June 10, 1945, at Pierce City, Missouri. The Missourian didn't carry the younger man's obituary, but I was able to glean some information from Ancestry.com and the Missouri Secretary of State's website.

William Jr., a licensed embalmer, apparently moved from Cape Girardeau County between 1917, when he married Susan Deen, and 1920, when he is listed on the federal census as a resident of Pierce City. Subsequent census reports show that he continued to serve the community as an undertaker.

After his first wife died in 1920, he married Louisa M. Weinzirl in 1921. She survived him, along with three children from the second marriage.