Here's a bit of trivia you may not know: The first public event staged at the A.C. Brase Arena Building in Cape Girardeau was a Golden Gloves boxing tournament, organized by the Junior Chamber of Commerce (the Jaycees).

Development of the land that would become Arena Park and construction of the civic arena began in the spring of 1937. The labor for the project was supplied by the Works Progress Administration. By the winter of 1939-1940, the arena was under roof and had progressed to the point that Golden Gloves organizers began considering moving the tournament there from Houck Field House.

Those same organizers had already prevailed upon the city fathers for permission to use facilities in Fairgrounds Park (now Capaha Park) to train the young boxers. A Nov. 22, 1939, article in the Southeast Missourian detailed the arrangements: "It was announced that the Junior Chamber had obtained permission of the city to use the swim pool bath house in Fairground Park as training quarters before the tournament next February.

"There will be actually two quarters, one for white boys and one for Negroes, but only one ring will be used. All necessary equipment has been secured for outfitting the quarters...

"Two stoves to heat the rooms are to be installed and a hot water heater will be put in operation to provide plenty of hot water for showers.

"Dr. W.F. Oehler, head of the medical committee, said that this year all entrants will be given medical examination at the outset of training with periodical checkups to come later in order that none will have to be dropped from the list just before the bouts.

"Also a plan is being followed whereby the matching of the fighters this year will be more carefully watched so that a novice will not be paired against an experienced fighter. This has been one source of criticism of matchings in past years."

With the training facilities established, Ike "Ikey" Bollinger and Billy Caldwell began the task of turning youngsters into pugilists. While a lot of the athletes were residents of Cape Girardeau, some traveled from as far away as Anna and Metropolis in Illinois, and Fredericktown, Perryville, Chaffee, Illmo and Jackson in Missouri to train here. The Delta CCC Camp, a facility for African-American youths, contributed a large contingent.

Gradually, the list of hopefuls was trimmed, as boys dropped out, unable to keep up with the rigorous training methods employed by Bollinger and Caldwell, both veteran boxers themselves.

As the athletes busied themselves at the Fairground Park facilities, work was being rushed at the Arena Building to make it a suitable venue for the event. Early in January 1940, the WPA gave its permission to use the building. Members of the Jaycees then began the task of turning the unfinished building into a boxing arena.

With Willard Estes guiding the work, a new ring was installed, and bleachers and folding chairs were placed around it. All was ready for the start of the preliminary rounds on Jan. 22, which would further trim the number of members of the Cape Girardeau team. A Jan. 17 story in the Missourian listed the names of the local athletes, their weights, and their experience classifications. 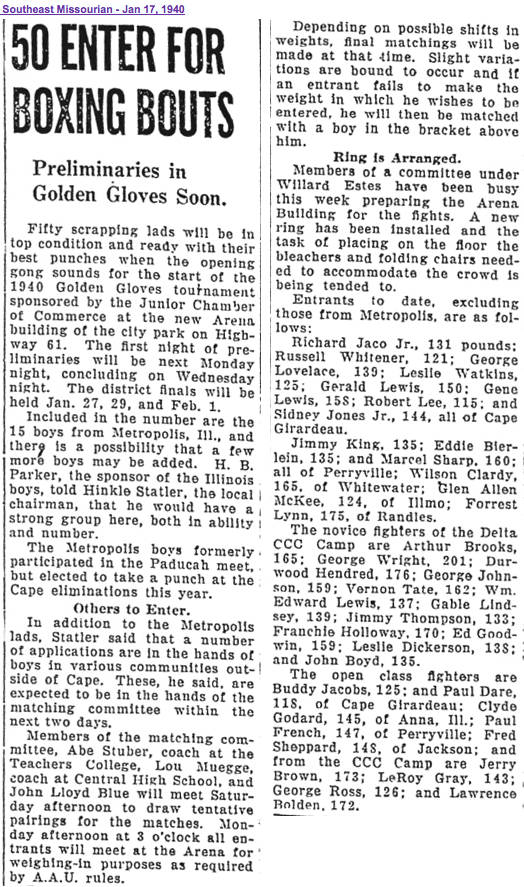 The preliminaries began the night of Jan. 22 with a card of 11 bouts. On Jan. 24, 12 more elimination fights were staged. By Jan. 27, the Cape Girardeau team members had been chosen. They would next fight members of teams from Sikeston, Poplar Bluff and Hayti in the two-night semi-finals. The finals on Feb. 1 chose the team that would represent Southeast Missouri in the next stage of the Golden Gloves competition in St. Louis. 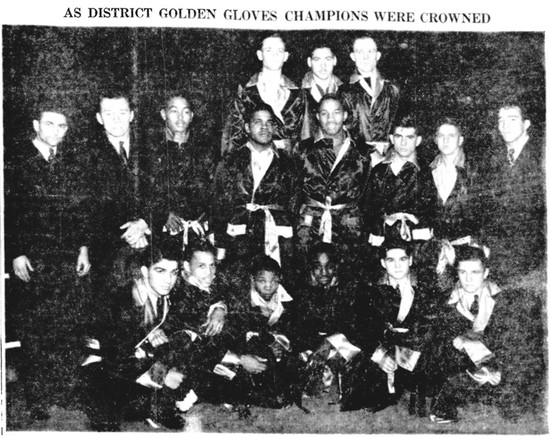 The above photo shows the group of boxers from over Southeast Missouri who went through the district tournaments and the final tournament here to win championships in their respective classes and earned the right to represent Southeast Missouri in the state Golden Gloves tourney in St. Louis. Left to right are: Top row, John Groves of Senath, Durwood Hendred of Delta CCC camp, and Clyde Goddard of Anna, Ill. Standing, Ike Bollinger, coach of the Cape Girardeau team; Lyn Twitty, coach of the Sikeston team; George Johnson, Maurice Brown and Jerry Brown of the Delta CCC camp, J.R. Martin of Kewanee, Bob Parker of Metropolis, Ill., and Billy Caldwell, a coach of the Cape Girardeau team. Seated, J.C. Scoles of Malden, George Ross of the Delta CCC camp, Theodore Gibbons and Albert Irons of Poplar Bluff, Glen Allen McKee of Illmo and Russell Whitener of Cape Girardeau. Not in the picture are Kenneth Herter of Williamsville and Doug Coleman of Sikeston.

The following stories covered the action at the St. Louis tournament. 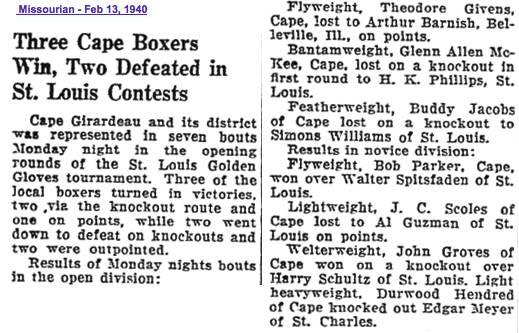 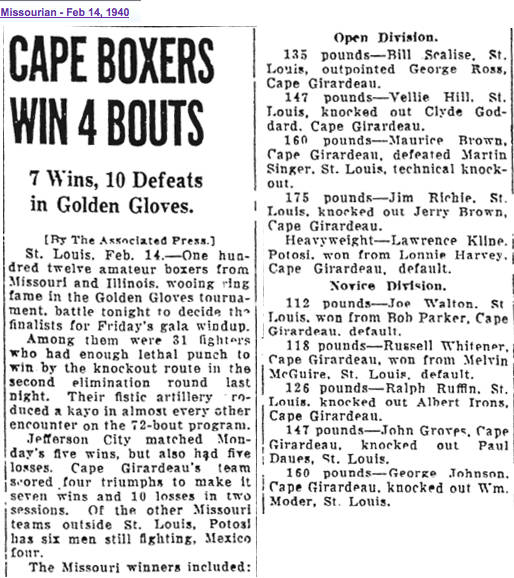 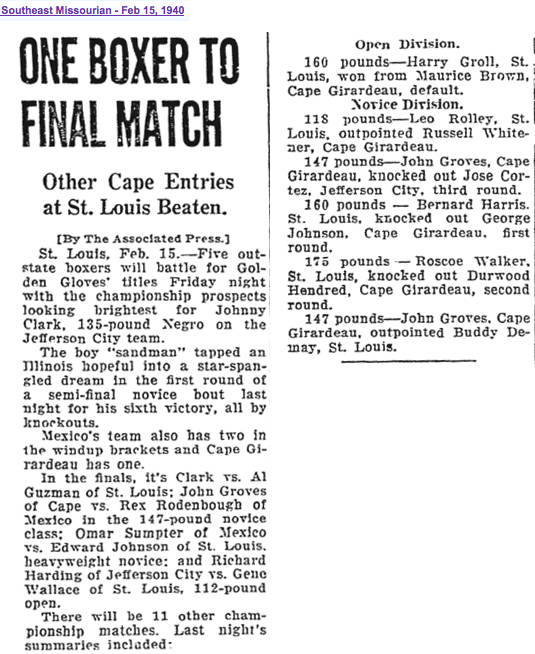 At the end of the tournament in St. Louis, the only member of the Southeast Missouri contingent who remained was John Groves of Senath. However, he, too, was eliminated in the finals. Fighting in the 147-pound class, Groves lost on points to Rex Rodenbough of Mexico, Missouri. The latter was the only competitor from outside St. Louis to win in a finals bout.