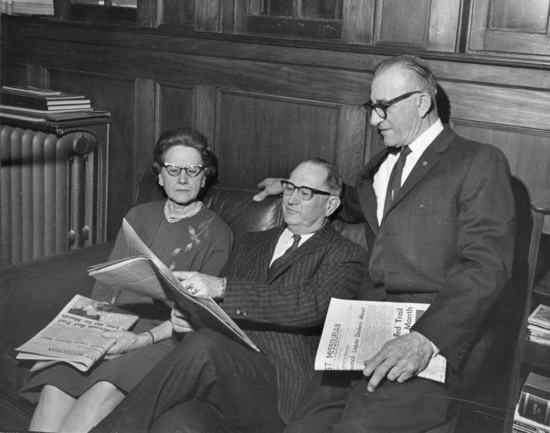 The beginning of a new year in 1965 meant the end of the careers of four, longtime employees of the Southeast Missourian: Fred C. Gerecke, Flora Deneke, Jean L. Giroir and Herbert Howes. Together, they had 124 years of work experience at the newspaper.

I had heard of Giroir and Howes, but was unfamiliar with Gerecke or Deneke until I ran across a front-page story in the Jan. 16, 1965, Missourian that announced the quartet's retirement. The article was accompanied by the photograph above. Left to right are Deneke, Howes and Giroir. Gerecke may have been camera shy, because his image is absent from the story, which reviews each retiree's experience at the newspaper. I found an early picture of Gerecke and have included it in the story reprinted below.

First to Retire Under 1961 Plan

The various talents of four veteran employees who have helped thousands of issues of The Missourian into print and into district homes have been applied to their last edition of the newspaper.

With their recent retirement, the four -- Fred C. Gerecke, Miss Flora Deneke, Jean L. Giroir and Herbert H. Howes -- have left behind a combined total of 124 years of work and effort for the newspaper.

They are the first employees to retire under The Missourian's retirement plan adopted in 1961.

The four represent a storehouse of newspapering know-how in such diverse tasks as running a press, operating a switchboard, fixing a linotype machine and supervising a crew of carrier boys.

Oldest in the point of service was Mr. Gerecke who was foreman of the pressroom and stereotyping operations. His tenure predates The Missourian's present building, erected in 1925. 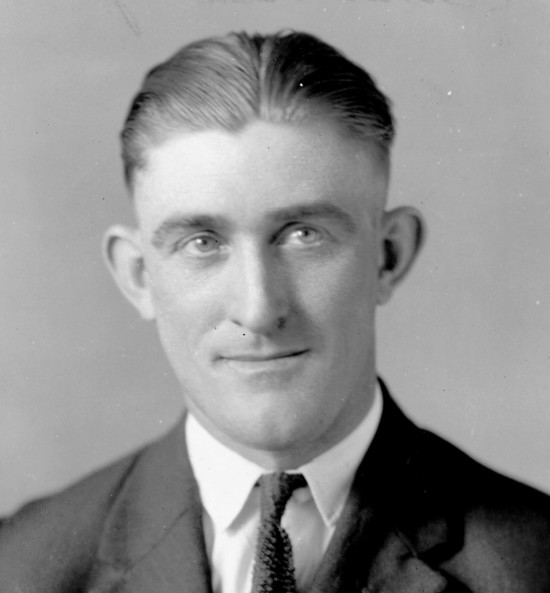 Mr. Gerecke joined the newspaper Aug. 25, 1924, when it was being printed in the building now occupied by the Chamber of Commerce (in the 200 block of Broadway).

He soon inherited part of the considerable undertaking of moving and reassembling the press in the new location.

When he was first employed, Mr. Gerecke was assistant pressman to the late Ernest Goehring, whom he succeeded in 1947.

His job was the supervision of all pressroom and stereotyping operations. The new pressroom foreman is John Dunz.

Miss Deneke came to The Missourian on March 5, 1928, as a switchboard operator. Her other duties through the years have included general clerical work in the business office and the circulation and classified advertising departments.

"I didn't think then that I would be here that long," Miss Deneke recalls in reflecting on her long service.

Succeeding her in the business office is Larry Sides.

He was a linotype operator and for about the last 10 years of his employment was the composing room machinist, seeing after the maintenance of the intricate machines that set the metal type.

Mr. Giroir is a native of New Orleans, La., and had worked on several newspapers and in commercial printing shops before coming to Cape Girardeaqu to answer a "printer wanted" ad in a newspaper.

His place as the composing room machinist has been filled by Paul L. Ervin.

As circulation manager for nearly 20 years, Mr. Howes has been responsible for the distribution of the thousands of newspapers printed each day. He was employed in that capacity on April 1, 1945, when, he remembers, the circulation was about 12,000 and just 29 carrier routes were operated here.

Looking back to the day he was offered the job as circulation manager, Mr. Howes recalls that he was uncertain whether he should accept.

"My wife encouraged me and I'm glad she did," he remembers.

One of the major satisfactions to his job, Mr. Howes remarked, has been to observe how well many of the youngsters who worked for him as carrier boys had turned out in later years.

Their many years of service the the newspaper concluded, the four persons now can look to new activities to occupy their time.

Mr. Gerecke resides with his wife at 114 S. Henderson St. His brother, the late Rev. H.F. Gerecke, was the official chaplain to the German war criminals convicted at Nuremburg. A Lutheran minister, he was an Army chaplain appointed to that role.

Miss Deneke resides at 1222 Normal Ave. She is the sister of Wesley Deneke of the same address and Arthur Deneke of Jackson.

Mr. Giroir and his wife reside at 2232 Cape Rock Dr. Their daughter is Mrs. Thomas L. Meyer of Cape Girardeau. A son, Jean Jr., was killed in 1950 while in the armed service.s

Mrs. Howes and his wife reside at 269 N. Lorimier St. Besides their son, Julian, Mr. and Mrs. Hoses have a daughter, Mrs. William Kuykendall of Kansas City.