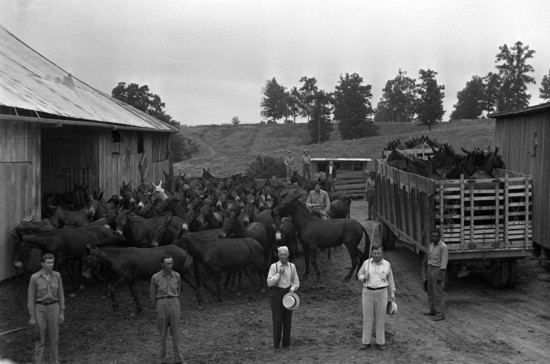 On my computer at work I keep a file of stories I find interesting and that I think I may eventually transform into blogs. One of those stories featured the above photograph. Unfortunately, only the two men in white shirts are identified. They were, from the left, Tom Scott of Benton, formerly the sheriff of Scott County, and R.D. Clayton of Sikeston. They were shown with livestock handlers loading 105 mules onto trucks on Scott's farm, one mile south of Benton on Highway 61. The animals had been purchased by Edwin Pope "E.P." Coleman Jr. of Sikeston, "owner of extensive district cotton lands."

Here's the newspaper article that was published with the photo in The Southeast Missourian on June 14, 1939.

BUYS 105 MULES FOR FARM USE

Big Transaction in Scott County Made.

A Southeast Missouri landowner today had completed purchase of 105 head of mules, at an average price of $125 each, to be put to use on his farm. The landowner was E.P. Coleman of Sikeston, who farms 20,000 acres and has supervision over 40,000 acres more, and he made the purchase from Tom Scott, former sheriff of Scott County, and R.D. Clayton of Sikeston.

All of the animals were two years old except six yearlings cut into the drove. The aggregate price of the herd was not divulged, but Mr. Scott and Mr. Clayton said the mules are now selling all the way from $60 to $160, and $125 is a fair average price for a top-notch animal.

None of the animals will work this year, but next year they will be put to harness.

"Good young mules offer the best security for your investment," said Mr. Clayton, who has been dealing in mules for over 20 years.

Not only are young mules in demand. There's another factor that is stabilizing the market demand. Mr. Clayton pointed out that he has sold an average of 550 mules annually to agents of the British government, who send them to India to be used as pack animals. These are from 4 to 10 years old, and this makes good small mules locally demanded at a good price, he said.

Only last week the two men sold 100 mules to operators of Trailback Plantation near Hunter. Right at this time Charles McConnell of Maryville is making his headquarters at the Clayton barns at Sikeston where he is grabbing all the good mules he can find to be shipped by the British to India. Frank Simpson of Omaha, Neb., also has been buying mules for 21 years from Clayton to be shipped to India.

The fact that Missouri is a headliner in mule production has created a great mule market in this district. The smaller type of mule, which has in this district been referred to as "streamlined," is popular -- he can turn out a great amount of work, is fast, and, from the standpoint of upkeep, is comparatively economical to other methods of motivation on the farm.

Curiously, I had very little else in the file on Mr. Coleman. I did learn that in 1966 he and his wife, Kate Hetherington Coleman, a native of Canada, donated $400,000 to the building fund drive of Delta Community Hospital at Sikeston. That donation increased their total contribution to the drive to over $1 million.

A June 24, 1966, story in the Southeast Missourian gave details of their generosity:

"But when bids were opened Wednesday afternoon, the cost of the renovation and addition was running $800,000 above the anticipated figure.

"So the Colemans, desiring to see the total plan become a reality, came through with another $400,000..."

Perhaps the couple's generosity stemmed from a personal connection to the hospital, which Mr. Coleman helped found and construct in 1948. His obituary on Sept. 7, 1972, states he served on the hospital's building committee and, at the time of his death, was president of its board of directors and chairman of the executive committee.

I could find nothing else in the Missourian's files on E.P. Coleman, nor on his wife, Kate. But I did find an interesting tidbit on Ancestry.com.

It seems that Mr. and Mrs. Coleman sailed on the maiden voyage of the ocean liner SS Andrea Doria, which departed from Naples, Italy on Jan. 14, 1953. They arrived at the port of New York on Jan 23, 1953.

Three years later, on July 25, 1956, the Andrea Doria, collided with the eastbound MS Stockholm, as the Italian Line ship approached Nantucket, Massachusetts, bound for New York. Only 46 persons lost their lives in the accident, and 1,660 others were rescued.