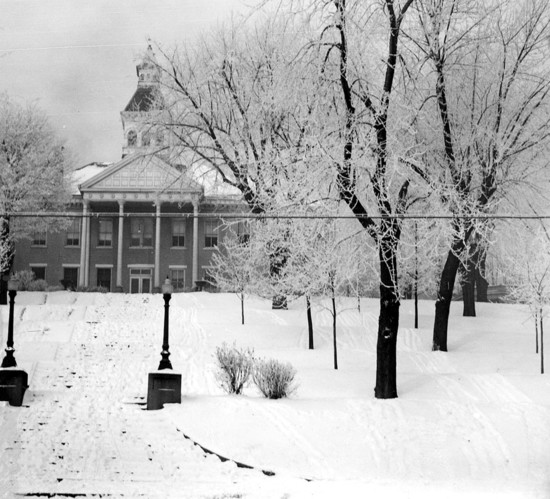 I understand Councilwoman Loretta Schneider is trying to drum up support for a municipal Christmas tree in Cape Girardeau. At a recent City Council meeting, she pointed out that the town's first municipal tree was held in 1914. Now, I'm not sure where she got her information, but perhaps she's been reading the Missourian's "Out of the Past" column. One hundred years ago, the tree was the talk of the town.

Just who came up with the idea for a community holiday celebration in 1914 isn't clear. But they were likely following the example set two years earlier, when a municipal tree was erected in Madison Square Garden in New York City. In 1913, Cape Girardeaan Frank Kimmel launched his own, self-funded celebration. He rented a store room at the corner of Main and Independence streets, decorated a large Christmas tree with "vari-colored electric lights," and bought gifts of toys, handkerchiefs, candy, nuts and fruit. He and Mrs. E.G. Gramling handed these parcels out to every child who participated in the celebration.

The next year, talk began in November that Cape Girardeau should have a MUNICIPAL tree celebration, organized by the city. One of the earliest proponents of the idea was Mrs. L.B. Houck. She spoke to fellow members of the Wednesday Club, a women's group, in mid-November, urging them "to give every support to the movement on foot for Cape Girardeau to have a municipal Christmas tree."

A petition drive was launch, which saw support from throughout the town. Leading the charge was the Cape Girardeau Provident Association, which was a community-based society that collected funds, food, clothing and shoes for distribution to the needy. Other organizations that supported the petition drive were the Wednesday Club, the P.E.O Sisterhood, Eastern Star, Daughters of the American Revolution, Woman's League, United Daughters of the Confederacy, Knights and Ladies of Security, Woodmen of the World, the Commercial Club, the Benevolent Protective Order of the Elks, Knights of Columbus, St. Mark's Lodge, and the Retail Merchants' Association.

While one city councilman voiced his objection to the city sponsoring such a celebration, the majority did not. The council asked Mayor Fred A. Kage to appoint a committee to organize the program, which he did. Those members were: Mesdames E.G. Gramling (chairman), W.H. Harrison, George Patton, P.A. Hoch, and L.B. Houck; Messrs. R.G. Ranney, Giboney Houck, J.T. Nunn, Russell Dearmont and R.B. Andrews.

The committee members quickly got to work collecting money, organizing the program of carols by youngsters and music by the Schuchert band, and buying the small gifts that would be given to each child participating.

The task of obtaining the tree itself fell to Charles Boutin and Frank Kimmel. The committee had been donated a pine tree by Charles Blattner from his farm just west of town. But the first attempt to cut it and transport it failed because of inclement weather. Major Giboney Houck and his helpers had a bit more success. They managed to cut and transport an evergreen to town. But the following day, A.M. Tinsley, who was in charge of the water and light plant here and who had the job of wiring the tree for lights, rejected the tree. It had been damaged in its travels to town and was not the perfect specimen needed.

Tinsley then took the matter in hand, sending several of his workers after a new pine at the Blattner farm. It, too, faced a hard trip into town: "The men cut the tree down and loaded it on a log wagon Monday afternoon and were proceeding to the city. The roads were slippery and hard to travel and finally the wagon slipped around so far that it was in danger of striking a tree and being crushed. A pole was used to throw the wheels over into the road and the wagon, striking the pole, was overturned to the extent that the tree was thrown off.

"It was then so late in the evening that the men quit and waited for the morning to come before trying to load the tree again and resume the journey to the town. This morning (Dec. 22, 1914) they got at the task bright and early and soon had the big pine on the wagon and started again on the trip."

The pine, which stood about 40 feet high, was erected east of the Common Pleas Courthouse at the top of the terraces and decorated with hundreds of colored electric lights and silver, gold, red and blue ornaments. Topping the tree was a "Star of Bethlehem": "With a red center, the big five-foot-across piece had a white border, which alternated in lighting with the center design. Persons living in Illinois 10 miles back from the river said today on a visit to the city that the star could be seen fairly plainly that far."

On Christmas Eve, 1914, the bells in church steeples throughout the city called residents to Courthouse Park, and at 7 p.m., a large curtain blocking the view of the tree dropped. An article in The Daily Republican describes the scene: "Church bells rang for five minutes just before 7 o'clock, as arranged previously, and then a wire was connected which lighted the tree. A tremendous acclaim from the throats of all went up in appreciation of the wonderful sight of light and color.

"Thousands of people attended the exercises in courthouse square... Hundreds of little children sang the carols with piping voices and then engaged in the rush for the counters (in the courthouse) where a stocking filled with Xmas delicacies and toys, dolls and baubles awaited every one."

Not everything went off without a hitch at this first ever Cape Girardeau municipal Christmas tree. Snow, which earlier in the day blanketed everything with a picturesque coating of white, had turned into a soupy mess on walkways and the lawn of the courthouse by evening: "There was slush nearly ankle deep on the lawn off the walks in front of the courthouse. Women and children waded through it to get near the tree and take part in the singing of the carols. The wind was raw and it was cold. But thousands braved the discomforts to stand about and wait the opening of the program."

The newspaper added: "A worse evening could hardly have greeted the opening of the festivities. The tree stood at the worst possible part of the courthouse yard as far as the surrounding crowds were concerned, but it could be seen from the downtown business street, which enabled thousands who did not go to the yard to view it in its mighty splendor."

In the end, after the band played and the children sang three carols, 1,500 gifts were distributed to the city's youngsters.

Well, not all of the city's youngsters. Shamefully, African-American were excluded from this municipal Christmas program. Earlier, arrangements had been made, after consultation with Professor John Cobb, principal of Lincoln School, to hold separate celebrations for African-American youths at two black churches. A story in The Republican stated, "Professor Cobb of the negro school and Mayor Kage conferred for the purpose of settling finally the arrangements for the colored children's participation in the celebration. Professor Cobb informed Mrs. Gramling that he did not believe the negro children would care to hold a separate celebration on Xmas day for various reasons. For that reason Mrs. Gramling agreed to send ornaments and the presents for all negro children in the city to two churches where Xmas trees will be had for the colored youngsters to be distributed there." No other details are given about these separate celebrations.

In succeeding years, the city held municipal Christmas celebrations, but apparently none compared to that first effort.