A recent drive through downtown Cape Girardeau revealed that Sherry and Mike Yeager at Renaissance, the home decor store at the southwest corner of Main and Broadway, have been keeping things fresh. Their building sports a new, white paint job that has transformed its appearance. Congratulations to them. The building looks clean and attractive.

For many years, that spot was home to jewelry stores, first Clemens Jewelry and then Hale's Fine Jewelry.

Victor J. Clemens came to Cape Girardeau in January 1923 to help his aunt and uncle, Mr. and Mrs. William H. Campbell, with their jewelry business. The Campbells of Evansville, Illinois, had been in the jewelry business here since 1914, having bought out Al Chenue's shop at 39 N. Main St. In 1919, Campbell moved the store to a space south of the St. Charles Hotel.

The Cambells sold out to their nephew shortly after his arrival in Cape Girardeau. He, in turn, relocated the business to a store room inside the St. Charles in 1929. There it remained until 1938, when Clemens moved it to the main floor of a monstrous, three-story structure at Main and Themis. "Monstrous" is, of course, just my opinion of the old structure. The massive hulk can be seen in the background of numerous old photos of Main Street. Here's what the old place looked like: 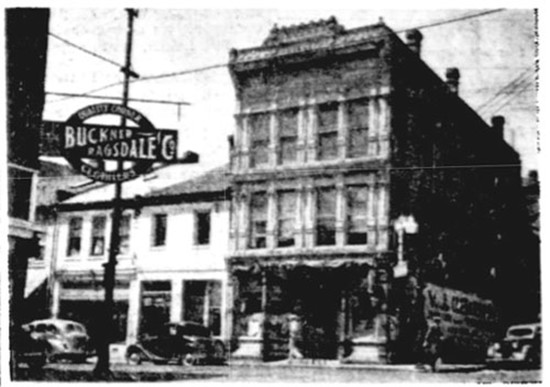 By 1938 Clemens determined that the old building, and the two structures to the south of it, needed a makeover. In September of that year, he announced plans to modernize the properties, inside and out. He employed contractor J. Will Taylor to do the work, which included removing the third story on the corner building and to stucco the outside, so that all three structures would appear as one. The work was to take seven weeks.

Somewhere along the line, as work progressed, the plans apparently changed. The corner building was reduced to two stories, but the stucco promised never materialized. Instead, it appears all three structures received new facades of buff brick. In addition, Clemens had three new shops built west of the buildings along Broadway. So thorough was the makeover of the three Main Street buildings, it appeared as if a totally new structure had been built.

An article in the Southeast Missourian at the time praised the work done: "One of the greatest improvements made in recent years was the removal of the dilapidated old three-story building at the important corner of Broadway and Main and the erection of the modern, new two-story. The old building was erected in the early days and had served its purpose, while the adjacent two-story buildings were the worst eyesores on Main Street."

Another story noted, "The corner, once a drab and unsightly location, has been completely transformed. It appears as if a completely new building has been erected. The project, from the standpoint of remodeling, is an outstanding one of recent years in the city." 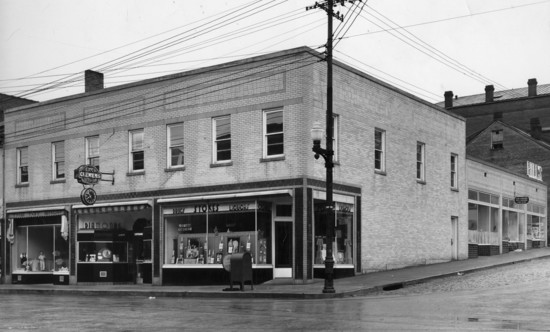 As you can see in this photograph, Clemens' jewelry store was housed in the center bay, facing Main Street, when work was completed in February 1939. It was flanked on the north by Stokes Drug Store and on the south by the Tot Shop, a children's clothing store. Continuing west on Broadway, the three new shops Clemens had constructed were occupied by Opal Peters' beauty shop, the law office of Judge O.A. Knehans, and Hill Electric Shop.

Clemens continued to operate his store until March 1954, when he sold it to Lemro Hale of Bonne Terre, Missouri. Clemens and his wife apparently left Cape Girardeau between 1956 and 1958. They both died in 1974 in San Diego, California.

Hale's Fine Jewelry continued almost another 50 years. The building was purchased by the Yeagers in 2004.