Mystery of the Missing Bell solved 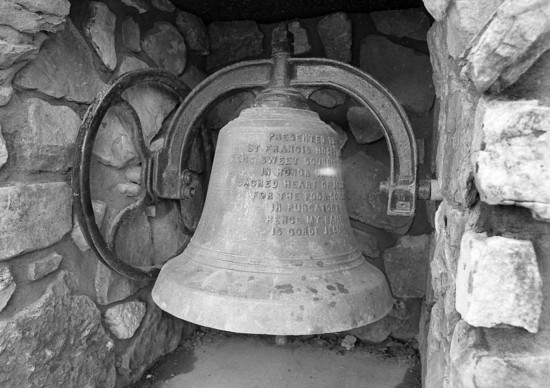 Sam Welker, a retired Cape Girardeau firefighter, and his brother have been wearing out their shoe leather lately trying to solve what they thought was a grand mystery. Call it: "The Mystery of the Missing Bell."

They noted a reference I included in an October "Out of the Past" column about the blessing of a bell at the new Saint Francis Hospital on Good Hope Street in 1914. Their question, both to me and apparently a myriad of other folks around town and at Saint Francis Medical Center, has been: "Where's the bell?"

Mind you, this is not a little tinkling bell that could have easily disappeared into someone's pocket or been mis-layed. This is a 300-pound bell. Moving it would not be a simple task.

The first reference to the bell that I have found was in The Daily Republican (now the Southeast Missourian) on Oct. 23, 1914, detailing its blessing.

The fine bell for St. Francis Hospital was dedicated this morning. The ceremony took place outdoors by the south entrance to the building. It was performed by Fathers Pruente and Walsh, assisted by Mrs. Charles Harrison, sponsor, and Master Theodore Bauerle and Paul Fuerth, two St. Mary's boys, who are altar boys at the hospital and who officiate at the services every morning at six o'clock. The bell was "purified, annointed and consecrated." It is now considered a holy voice calling to devotions. It weighs 300 pounds and has a beautiful tone. The Republican's representative had the privilege of being one of the first to ring it. It is the gift of Mr. Henry Bloemker of St. Louis, who also gave the bell for the new hospital at Waterloo, Iowa. It was made by the Hy. Stuckstede Bell Foundry company of St. Louis.

The inscription on the bell reads "Presented to St. Francis Hospital in honor of the Sacred Heart of Jesus, for the poor souls in purgatory, hence in my name is Corde Jesu."

It was a most impressive ceremony, lasting more than an hour. It was attended by the Reverend Mother of the order, by the hospital Sisters and by many friends of the hospital. The bell will be raised by a derrick this afternoon and set in place over the center of the main building.

The new holy water fountain is in the chapel, ready to be installed. It was given to the Sisters by Mrs. Theodore Bauerle and family in honor the late Mr. Bauerle.

The Elks are furnishing a room in the building, which will soon be in readiness.

The altar is here ready to set up and much new furniture is standing in the halls, waiting to be put in place.

The Reverend Mother will be here for several days and will see the hospital ready for use. She will also return for the dedication, Nov. 15. The hospital will probably be open for visitors on Sunday. Announcement will be made in this paper tomorrow concerning that matter.

For 62 years, that bell daily called the Sisters to chapel and tolled the Angelus at 6 a.m., noon and 6 p.m. But in 1976, when Saint Francis Medical Center was completed, workers removed the bell from its home "over the center of the main building" on Good Hope Street. Where it was for the next nine years, I'm not certain. The next and last reference I can find in the Missourian files is from May 1985, when an outdoor grotto honoring Sister M. Virgilia was built on the medical center's grounds off Mount Auburn Road. 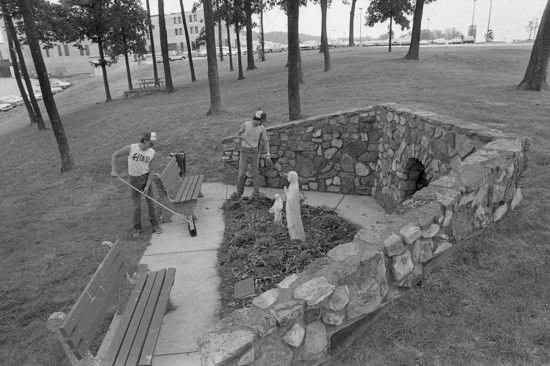 In the above photograph published May 12, 1985, in the Southeast Missourian, Chris Baker, left, and David Lenand groomed the new grotto and prepared it for the spring season. The bell was mounted in the alcove at right.

While mysteries don't always have a happy solution, this one does. I have it on good authority that the bell and other items from Sr. Virgilia's grotto were put into storage when the memorial was dismantled during construction of the Health and Wellness Center. It is hoped that one day the bell will again be put on display at Saint Francis, a fitting memorial to Sr. Virgilia and the many people throughout history who have supported the hospital.