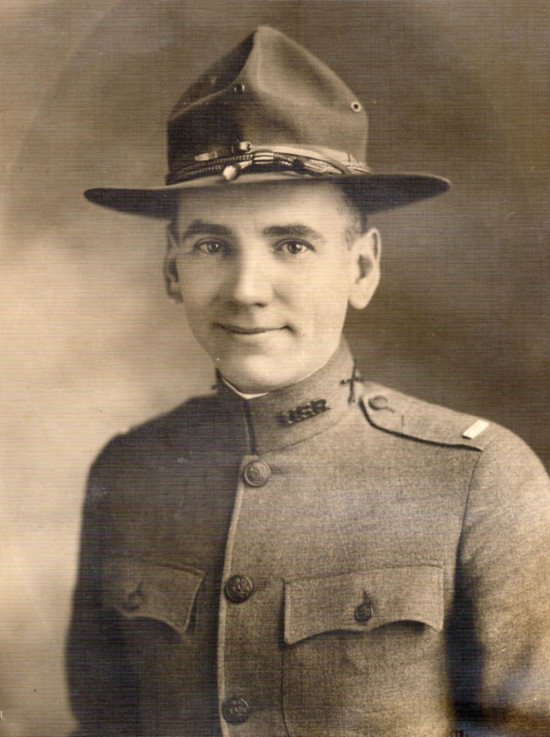 The centennial of the start of World War I last month got me thinking of the ways we memorialize our fallen heroes. One of those ways is naming American Legion posts for them. In Cape Girardeau County, those heroes are Clarence G. Althenthal, Clark A. Joerns, and Louis K. Juden.

Here are stories, pulled from the Southeast Missourian, about these soldiers' deaths. 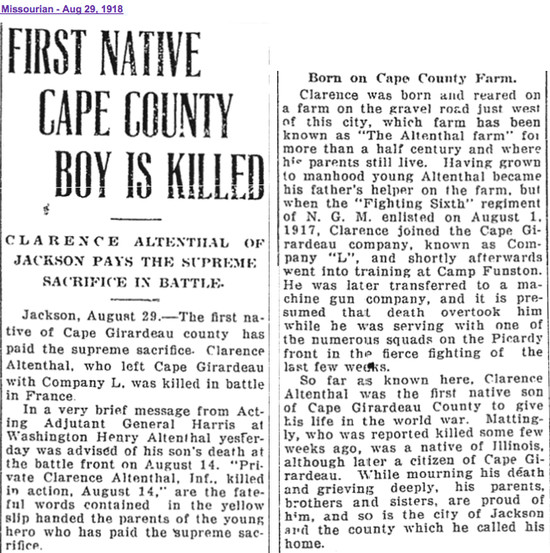 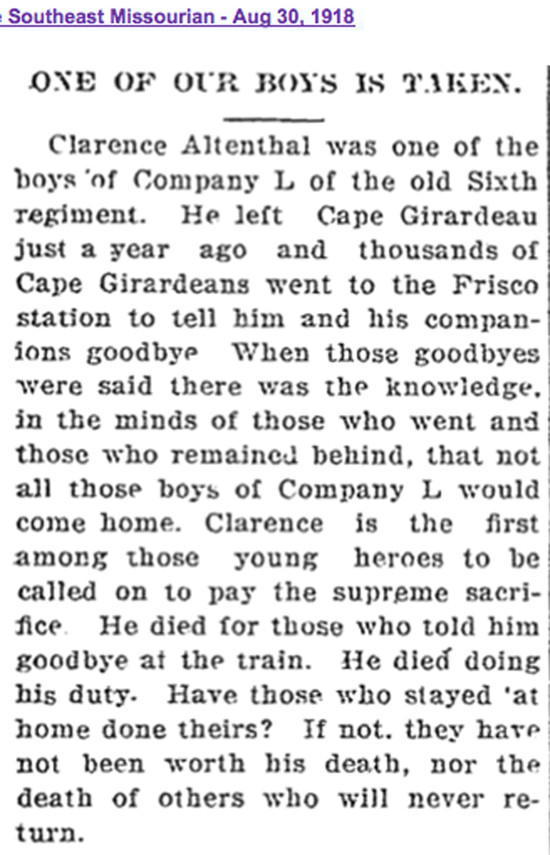 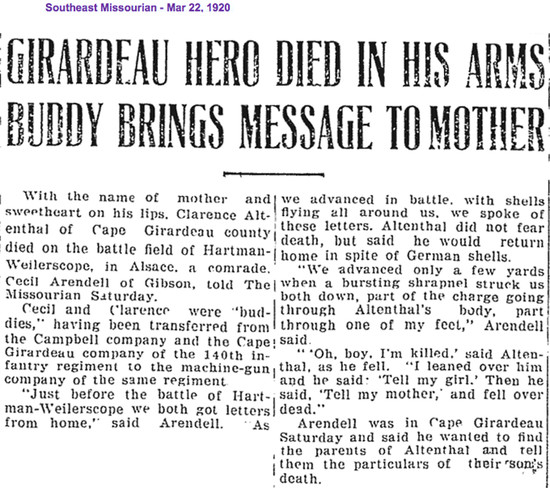 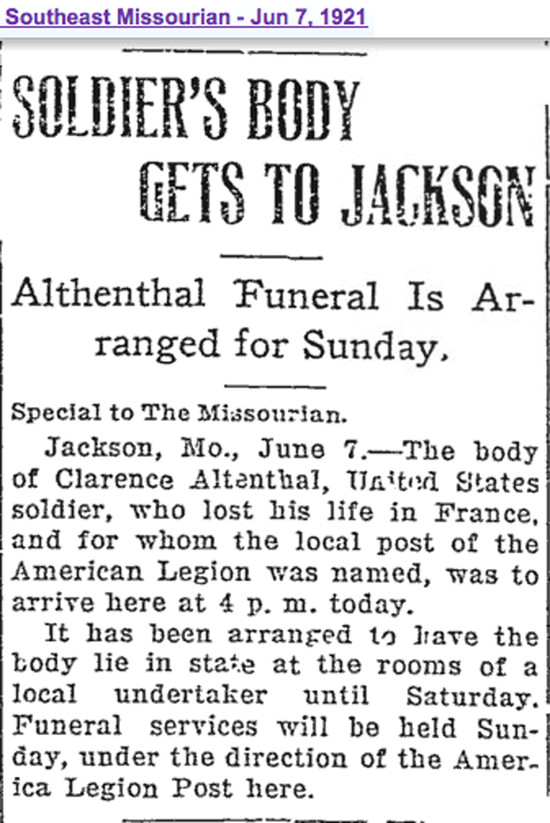 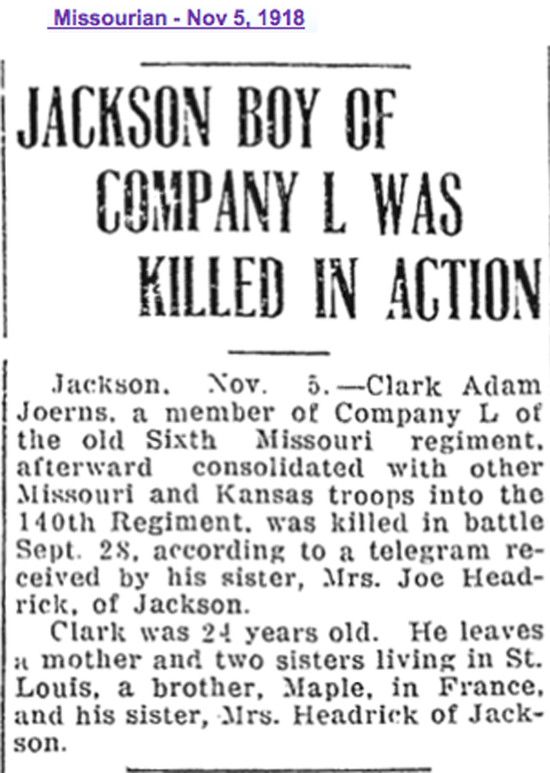 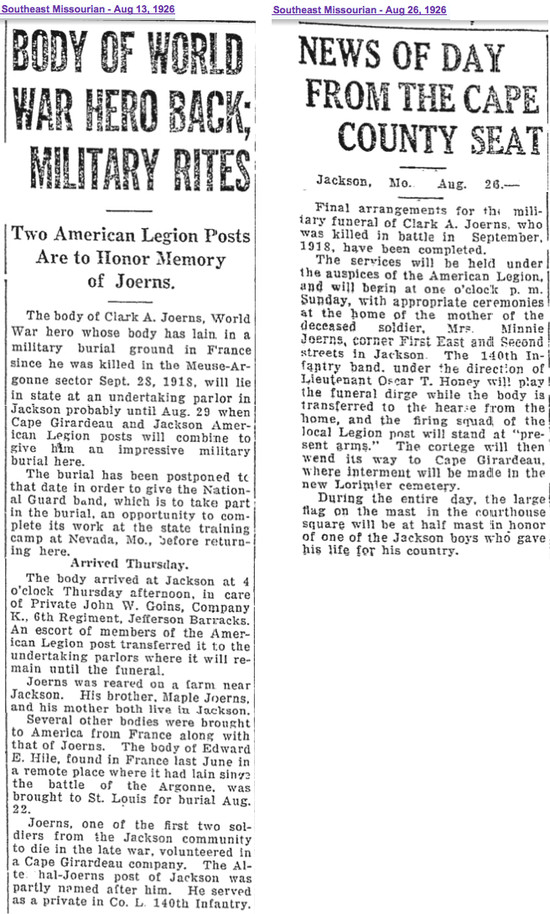 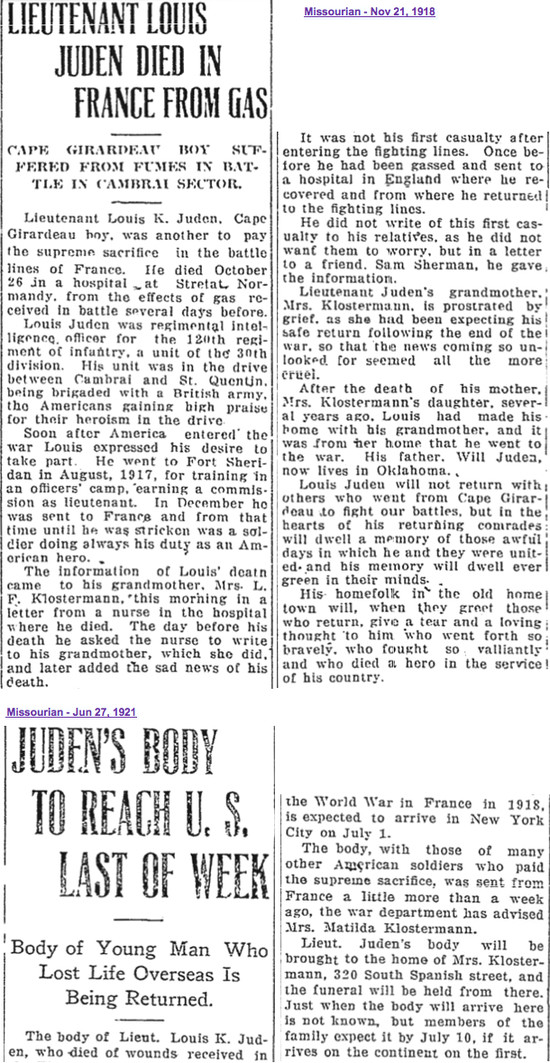 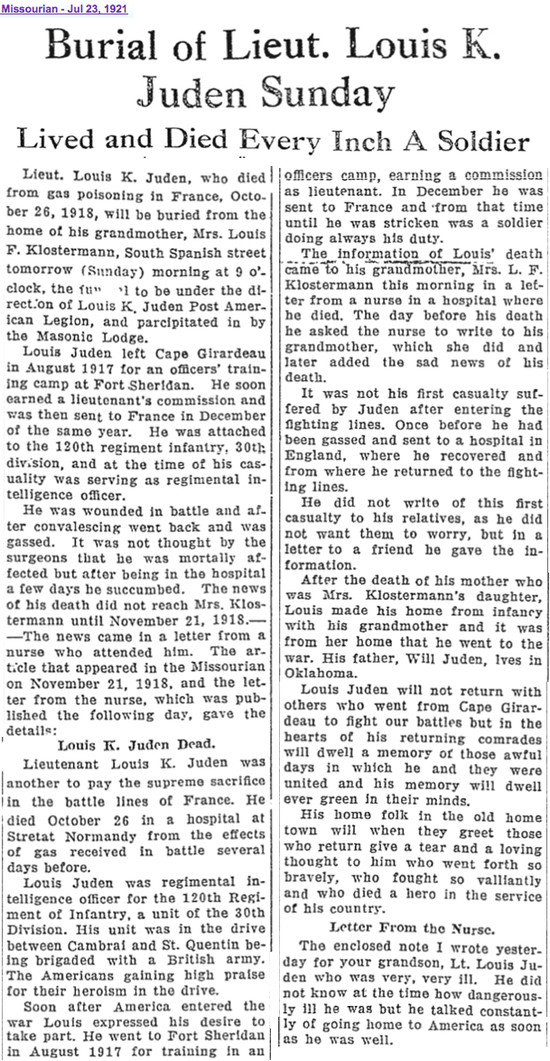 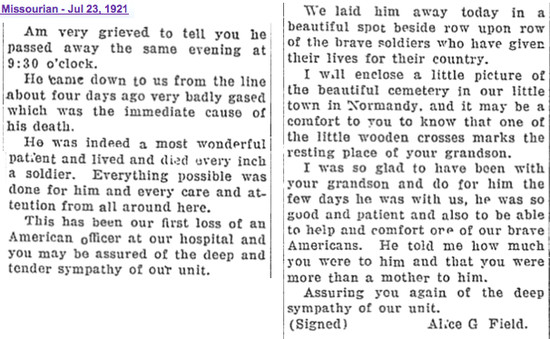 In addition to the posts at Cape Girardeau and Jackson, at least two other American Legion units were organized in the county. Writing in the Southeast Missourian in 1998, Jim Nelson recalled the history of the Pocahontas post:

"Locally on Sept. 13, 1919, a large number of people, including a strong delegation of veterans, met at Pocahontas for the purpose of organizing an American Legion post. (This was about the same time that efforts were being made to organize posts in Cape Girardeau and Jackson. -- Sharon) The organization was completed after a prolonged and exciting meeting that continued even into the following week. The veterans who had returned from service were acquainted with some of the conditions that had prevailed in the area during the war and felt that some explanations and promises were due from some of the local citizens.

"The meeting was held in the town hall at Pocahontas, packed with close to 500 attending. Several people whose names were called were not present, so a committee of veterans was appointed to go and extend a 'special invitation' to those persons.

"A number of persons were questioned as to their loyalty and patriotism. People were also asked to discontinue the use of the German language in their businesses.

"The officers elected at that first meeting for the Pocahontas Caldwell-Snider American Legion Post 115 were: Paul Kaiser, commander; Claude Davenport, assistant commander; Paul McNeely, secretary; and Linus Morton, treasurer. The post was short-lived and the members sold their meeting hall to Fred Lichtenegger in 1923. At the same time in the early 1920s, Oak Ridge attempted to organize a post."

Unfortunately, I've been unable to find any articles in the Southeast Missourian regarding this Marine's death. The following was included in the Missourian publication "Heartland Heroes," in 2004.

"Marine William Snider of Fruitland died of disease on Sept. 30, 1918, while with the 13th Marine Regiment. He was inducted into service at Fruitland on May 26, 1918. He was born there on March 16, 1898. Snider was overseas from Sept. 25, until his death five days later. He was buried at Oise-Aisne American Cemetery at Fere-en-Tardenois, France."

This information was gathered from the web sites of the Missouri Secretary of State's Office and the American Battle Monuments Commission.

Initial attempts to organize an African-American unit were made in May 1926 by Cape Girardeau attorney Frank Lowry. A newspaper article at the time noted there were 28 black veterans who had indicated they would join the organization. The effort apparently failed, however, because the next indication of such an organization was in July 1937.

By that time, the work to establish an African-American post was far enough advanced that leaders of the movement had applied for a charter. Fred Abernathy, who was leading the effort, had signed up 32 members for the post and looked to add 14 or 15 more.

I have been unable to determine how long the Lacey-Tyler Post was in existence. My guess is that it merged with the Juden Post in the 1950s. More research will be necessary to confirm that guess.

The only mention I found of either Lacey or Tyler's deaths in the Southeast Missourian was a one-sentence notice of the funeral of Lacey, buried in a larger article filled with items about Jackson:

Pvt. Lacey was buried in Jackson City Cemetery. Soldiers' records from the Missouri Secretary of State's web site indicate he died on broncho pneumonia on March 15, 1918. It's possible, however, that he also suffered from Spanish influenza. The first reported cases of that dreaded disease were at Camp Funston, Kansas, where Lacey died.

Unlike Lacey, whose war effort ended in the United States before it really began, Pvt. Tyler made it through basic training and was sent overseas. He was inducted into the Army on July 17, 1918. After training, he served in Europe from Sept. 8, 1918, until his death on March 12, 1919, in France of pneumonia, while with Co. A, 806 Pioneer Infantry. Online military records show he was buried at "American Cemetery, Noyers, L-et-C, France."

On Nov. 12, 1920, however, his body was re-interred at Arlington National Cemetery, in a section listed on his "Report of Interment" card as "Colored, Europe."