Centennial of the Great War

One hundred years ago, on July 28, Austria declared war on Serbia, ushering in the Great War, the War to End All Wars, the World War.

In Cape Girardeau, judging by the newspaper of the day, the news caused little comment. The article about the declaration was only two paragraphs long, tucked alongside a Buckner-Ragsdale Co. advertisement for men's shirts. 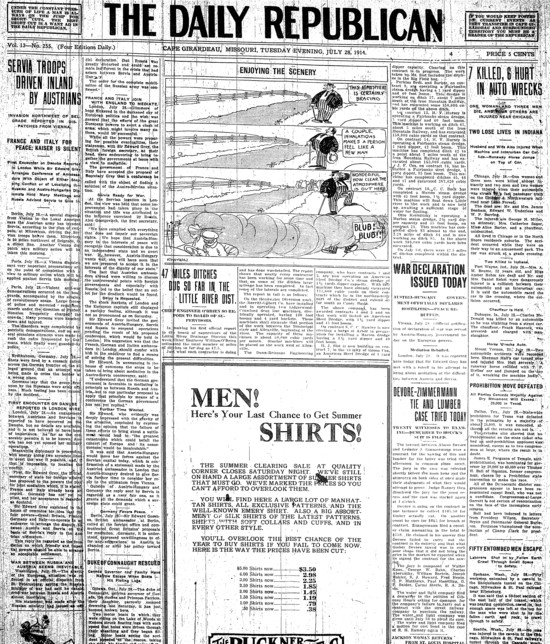 Here it is, enlarged: 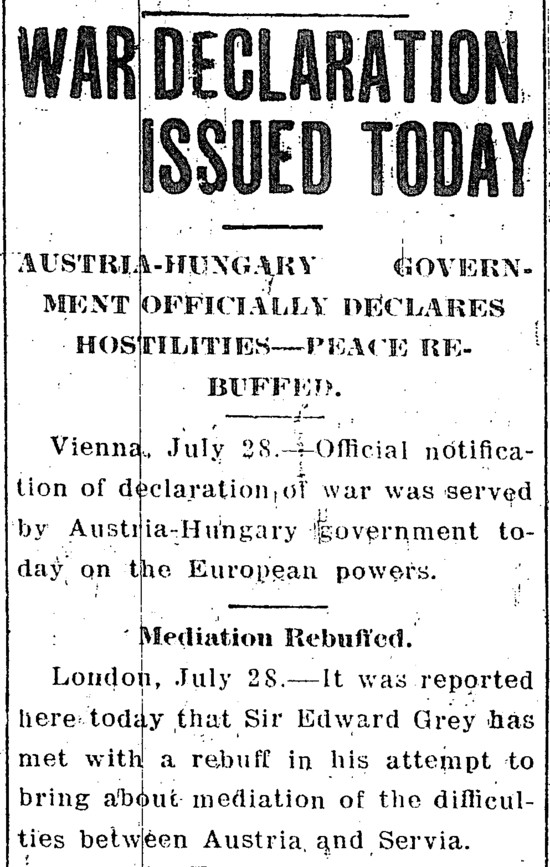 Such a small, insignificant article about a conflict that would eventually engulf the world and take the lives of more than 8.5 million people.

As the days went by, Girardeans began to take stock, and stories began appearing about the effect the war was having on local families. Here are a couple.

MAX KOECK WILL NOT GO BACK; TO GET HIS RELIEF

MARGUERITE OLIVER ORDERED TO INQUIRE ABOUT NECESSITY OF RETURNING.

Max Koeck, brewmaster at the local brewery, will not go back to Germany. He will not go because he couldn't if he so desired. While he is on the reserve list of army officers and because he has never taken out his naturalization papers in this country, he is subject to call to the colors of the Kaiser. Mr. Koeck said today to The Republican that he would seek to secure release from recall. It seems from his statement that a German officer engaged in business permanently in another country can secure his release from duty by application to the proper authority, in which case the German consul at St. Louis has to be applied to by German subjects in this district.

A call was printed in St. Louis papers today in German, signed by the consul, and asking that all German subjects present themselves there.

The state of war existing between Germany on the one side and France, Great Britain and Russia on the other would prevent any Germans from returning home now.

Miss Marguerite Oliver is in Rome just now. Her father, Senator R.B. Oliver, sent a cablegram to her Saturday evening, directing her to apply to Ambassador Page for advice as to the necessity of returning home. Her father has also communicated with Secretary of State Bryan to the end that the state department will act promptly in securing her passports if she wishes to return home at once. The father of the young woman of Columbia, who is traveling with Miss Oliver, has had Senator Stone make personal arrangements with Secretary Bryan to the same effect. The secretary has promised that his department would do all possible to take care of the young women.

Mrs. Herman Sauerland is probably the most worried woman in Cape Girardeau just now. Her husband, a janitor of the First National Bank building, left six weeks ago for Germany to sell his home property and bring his young daughter to this city. He is probably in the German army by this time and rushing toward France or Russia. Nothing has been heard from him and if the worst happens to him nothing probably ever will be known. It is such thoughts as these that are distracting his wife. In his absence she is acting as housekeeper for William Wellecke. Sauerland went to Erlinghausen, Marsburg, Westphalia. As he was in the reserve he will naturally be forced to fall in line and help fight the enemy.

One of the interested readers of The Republican's war bulletins every evening is Dr. A. List, who knows first hand what such a war means. Dr. List was with the German army in the streets of Paris in the seventies.

Many others who have served their time are interested watchers for Republican news.

HIS WIFE AND DAUGHTER ARE NOW VISITING IN ELBERFIELD, GERMANY

John Mehrle, the well known farmer living out on rural route No. 4, is worried very much at the present over the European troubles, as his wife and daughter are now visiting in Elberfield, Germany, and may be unable to leave for some time.

Mr. Mehrle received a letter from his wife this morning but it stated nothing about the war, as it was written July 24, several days before the crisis was reached and war was declared.

Mrs. Mehrle, her daughter, Miss Esther, and her sister, Mrs. Martin Bock, of Poplar Bluff, left here on the first of June and siled from New York six days later for a few months' visit with her mother in Germany. When the Mehrles and Mrs. Bock left, they intended to return about the first of September, but it will probably be considerable time before they can receive their passports to sail for this country.

While Mrs. Mehrle was safely back in the United States by Aug. 17, it seems the fears of Anna Sauerland in the earlier story were well founded.

Her husband, Herman, was recalled into the Germany army. She received occasional letters from him from 1914 to about 1916, before things went silent and she gave him up for dead. In desperation, she wrote to the Red Cross for help, and in 1918 she received a letter from her spouse.

From the resources available to me at the moment, it's impossible to know whether they returned to Cape Girardeau or not. They are listed in the 1920 City Directory at 220 N. Sprigg St., but the information for the book may have been gathered before Mary made her trip to Germany. They are not listed in the 1925 Directory.

Aside from a handful of mentions of the family in the newspaper, there is little evidence of its residence in Cape Girardeau. Except, of course, for a small grave at St. Mary's Cemetery, which holds the remains of Christina Gertrude Sauerland, daughter of Herman and Mary LeFarth Sauerland, who died Sept. 12, 1912, at the age of 11 months and 19 days.