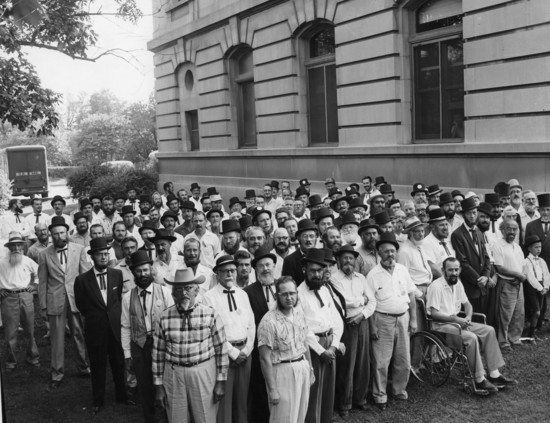 In 1956, when Cape Girardeau celebrated its 150th birthday, the ladies in town took to wearing long dresses and bonnets, and dubbed themselves the "Sisters of the Swish." Not to be outdone by the feminine set, the men of the town buried their razors and grew facial whiskers. They assembled on the lawn of the old Federal Building, above, to have their picture made.

Look closely. I'm betting you'll recognize one or two faces in this crowd. I found my uncle, Mark L. Seyer, and one of my mom's classmates, Jack Fuerth.

In 1971, the Cape Girardeau Jaycees decided to follow that time-honored tradition of whiskers growing for Missouri's sesquicentennial celebration. They approached the mayor of the town for an appropriate proclamation, and Howard C. Tooke was glad to oblige. 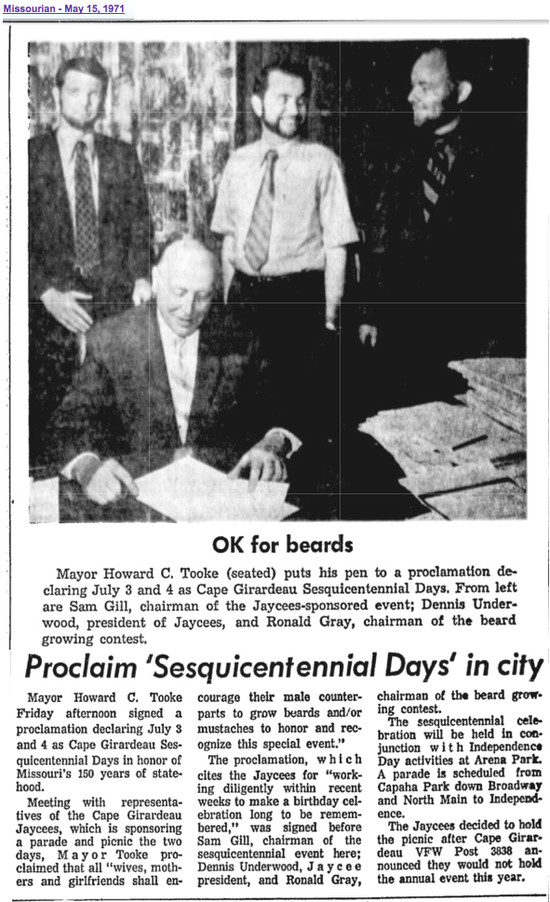 As is noted in this article, the town combined the state sesquicentennial with the annual Independence Day festivities. That year the Jaycees stepped up to fill the void left when the Veterans of Foreign Wars Post 3838 decided not to host the annual Fourth of July picnic. The Jaycees' Fourth of July Doin's would become a tradition in Cape Girardeau that lasted through 1989.

During that inaugural, two-day event, the Doin's were blessed with mild temperatures and big crowds. Here's how the Missourian reported on the event in the July 6, 1971, edition:

"The three-day holiday period opened Saturday morning with temperatures in the low 80s. A large crowd gathered along the parade route to view the opening event of the Cape Girardeau Jaycees' Sesquicentennial and Independence Day celebration.

"William Pat Gordon, parade marshal, said 50 units participated in the parade six blocks in length. They included the Bellettes of Belleville, Ill.; the Medinah Temple of St. Louis with fire engine, drill team, motorcycle group and others in automobiles; the Honda Patrol of the Three-Rivers Shrine Club of Poplar Bluff; the Skeeter Patrol of the Farmington Shrine Club; the Jaycees own Kazoo Band and many other marching units and floats including one of the Saint Francis Hospital.

"The two-day Fourth of July picnic at Arena Park, sponsored for the first time this year by the Jaycees, was called 'a huge success.'

"'It was a big success for us in every way. We made a little money and we will put it back into a July 4 fund with plans to make the picnic bigger and better every year -- sort of like the Jaycee Follies,' Samuel L. Gill, general chairman, said.

"He said the River City Rides reported having the best year ever at the picnic here and about 50 children entered in each of the feature contests.

"The crowd was heavier at the picnic on Sunday, Mr. Gill said. The traditional fireworks display went off on schedule before a packed grandstand and others watching from vantage points in the park. Much of the crowd remained on the grounds to enjoy the rides after the fireworks.

"Approximately 90 Jaycees and other Brothers of the Brush entered the beard-growing contest in conjunction with the Missouri Sesquicentennial being celebrated this year. 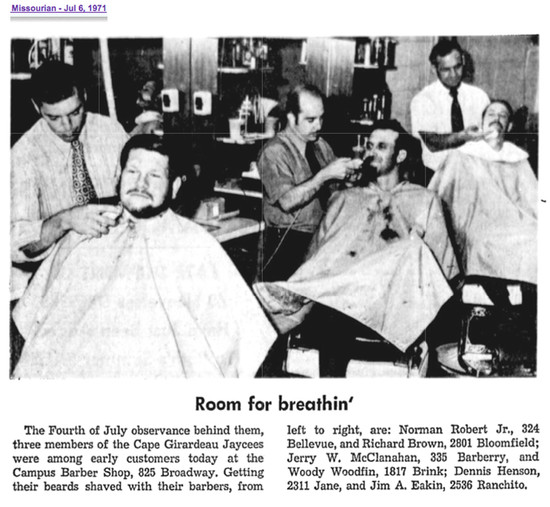 Following the festivities, it didn't take long for the hairy contestants to find barbers, as was illustrated in this front-page Missourian photograph.