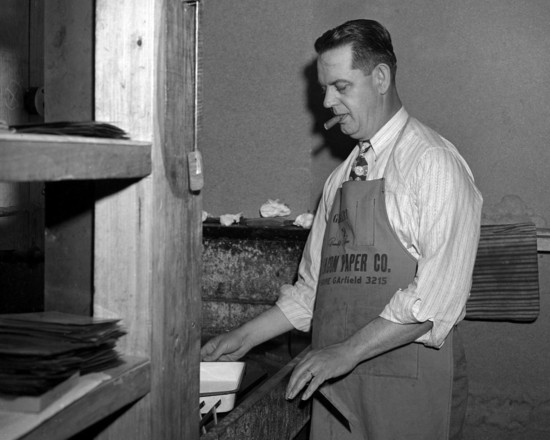 When we talk in the newsroom about G.D. "Frony" Fronabarger, it is almost always in terms of his photography. His work frequently illustrates the blogs Fred Lynch and I write, as well as history features written for the print edition. It's easy to forget that before he started taking pictures, Fronabarger was a reporter, and a very good reporter.

Starting in 1927, Frony covered a wide to variety of news, from double hangings to floods to lion hunts on an island in the Mississippi. Often, the stories ran without his name attached. Bylines in the Southeast Missourian were scarce when he began his writing career.

By the 1960s he was covering business and industry for the daily. And on July 20, 1964, the Missourian published the first of his weekly "Business & Industry" columns. They would continue, under different names, until Frony retired in March 1986.

I found his first column as I was researching the other day:

What struck me about the column was Fronabarger's attention to detail. That continued in his subsequent columns. It also set the standard for business columns that came after him, written by a host of other reporters since Frony's retirement in 1986.

Speaking of which, below is his final column. The perfect end to a career that spanned almost six decades.