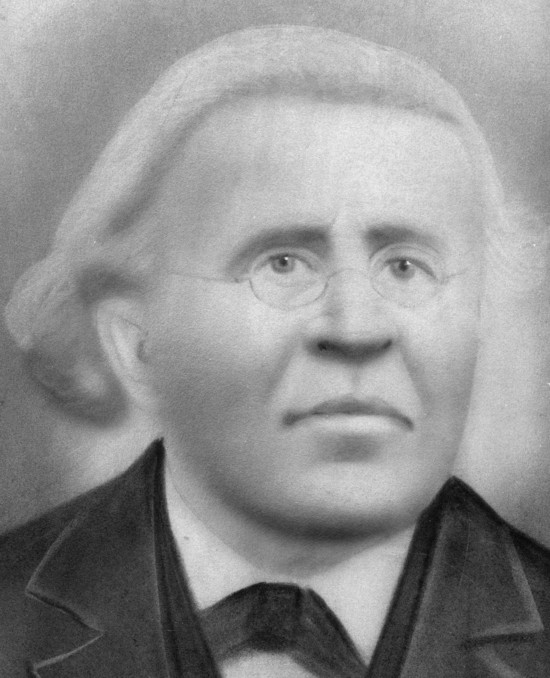 The image above is from my family's collection of photographs. It shows the Rev. Martin Scherer, who was pastor of St. Lawrence Catholic Church in New Hamburg, Mo., from 1867 until his death in 1898. The book, "History of St. Lawrence Catholic Church," written by the Rev. Hubert J. Eggemann, circa 1947, contains a detailed account of the priest's work in Scott County. (The book was retyped and updated many years later by Ramona Glastetter of Kelso, Mo. Catholics in this area owe her a great debt of gratitude for the efforts she has made to preserve the histories of the parishes in Scott County.)

Scherer was born in Bavaria, in the Catholic Diocese of Augsburg, on July 28, 1830. I have yet to track down his parentage, and Eggemann's book gives no clue. He was educated at the University of Munich as a physician, but later changed his interest of study to theology. It is said that he excelled in the study of ancient languages.

At the urging of the Mission Society (Ludvigsverein), he decided to become a Catholic missionary in the United States. In December 1854, he arrived at New York City aboard the ship the Washington. The ship's passenger list, found on Ancestry.com, gives his occupation as "physician." He spent about a year and a half at a seminary in Wisconsin, but, finding the climate disagreeable, he moved on to Vincennes, Ind. There he studied with the Benedictines. He was ordained a priest at Lafayette, Ind., on Oct. 24, 1858.

Shortly thereafter, Scherer transferred to the Diocese of St. Louis and on Sept. 14, 1867, became the pastor of St. Lawrence in New Hamburg.

Eggemann gives a description of the priest: "He was (a) short, stocky man, very energetic, had a very loud voice, was impetuous and at times choleric, but with all good humor. He had a saving sense of humor. He was courageous and afraid of nothing." His courage was demonstrated shortly after his arrival at Hamburg, when he walked into one of the four saloons in operation in the little town and addressed the "soaks": "He walked into a saloon, which was filled with men, many of whom, filled with alcohol, were bragging of what they had done or what they were going to do, and in a loud voice (the priest) called for silence! 'You have driven more priests away from here that the (Civil) war did not drive away,' (he said). 'But I tell you, you can't drive me away. I have come to stay and stay I will. I am going to be the boss.'"

Scherer was as good as his word. During his pastorate, he built a priests' house, a teacher's house, a new school and a convent, and made improvements to the stone church, including the installation of new statues, a new roof, and a furnace. (Until 1895, the church had no heat.) Also during his tenure, the church's interior was repainted and and gilded. He purchased three new bells from the Tart Bell Works in Cincinnati for $1,200 in 1892. The church's original bell -- a large steamship bell -- was destroyed when the stone edifice was burned by Southern guerrillas during the Civil War. Its replacement, from the Stuckstede foundry in St. Louis, sprung a crack in 1890, leading to the decision to buy the new set.

Scherer was making plans for the rebuilding of the bell tower at the time of his death. On Dec. 18, 1897, while hurrying to the church to say Mass, he slipped on a patch of ice, falling and striking his head on a rock. Eggemann's book continues: "He was carried into the parsonage unconscious. When he again regained consciousness he had lost the use of his reason. He was always living in the past... He remained that way until the date of his death, Feb. 16, 1898." Fr. Scherer died at Alexian Brothers Hospital in St. Louis after a two-week stay. His remains were returned to New Hamburg for burial.

During his St. Lawrence pastorate, Scherer performed 1,689 baptists, officiated at 333 marriages and buried 820 of his parishioners. His was buried among them in the cemetery behind St. Lawrence Church. Acting as pallbearers were Stephan Scherer, Anton Scherer, John G. Scherer, Theophil Scherer, Wendolin Scherer and Philip Scherer. All sharing his surname, but none related to him.

The story of Fr. Martin Scherer's work at New Hamburg is very dear to me and to members of my family.

My great-grandmother, Katherine Bullinger Stehr, was born in New Hamburg in 1874. Her mother died just two months after Kate's birth, and her father died two years later. Thereafter, young Kate was trundled from one sibling's home to the next. Eventually, my grandmother tired of this and ran away to her sister, Clara. Clara was Fr. Scherer's housekeeper.

He must have taken a liking to the orphan. According to family legend, he told her that as long as he had a home there, she had one as well. She continued to live at the priest's house until she and my great-grandfather, David Stehr, were married by Fr. Scherer in 1893.