My great-grandfather, David Stehr, was a blacksmith for many years in Scott County. He came from a family of blacksmiths. So I think he would have supported Cape Girardeau County's Anti-Horsethief Association. 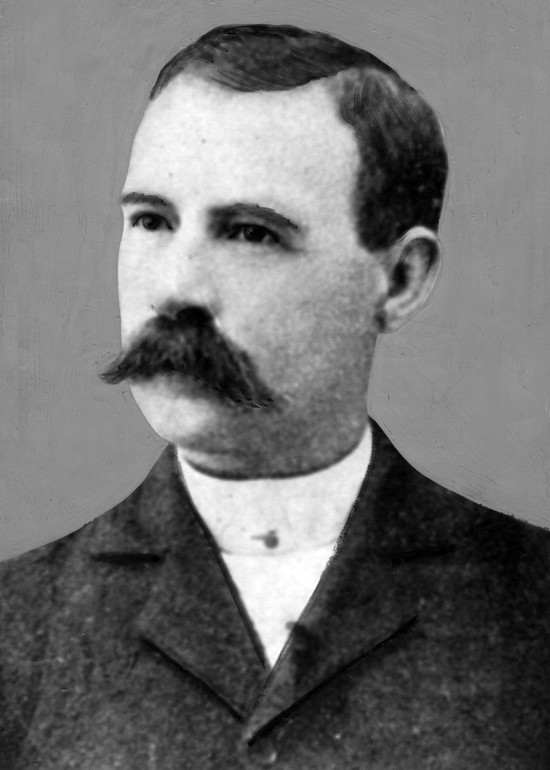 Apparently, the organization was the brainchild of Fred A. Kage, who ran a livery stable in Cape Girardeau for almost 30 years. Perhaps this is why the forming of an anti-horse thief association appealed to him.

The association was formed Aug. 2, 1890, at the county courthouse in Jackson, and Kage was chosen its president. He held that post the next four decades, finally giving it up in October 1931. A year later, Kage died at the age of 84.

About five months after his death, the Cape Girardeau County Anti-Horsethief Association died too. Organized to fight horse thievery, there was little reason to continue once wagons and buggies gave way to trucks and automobiles. The story of the association's history is told in this article: 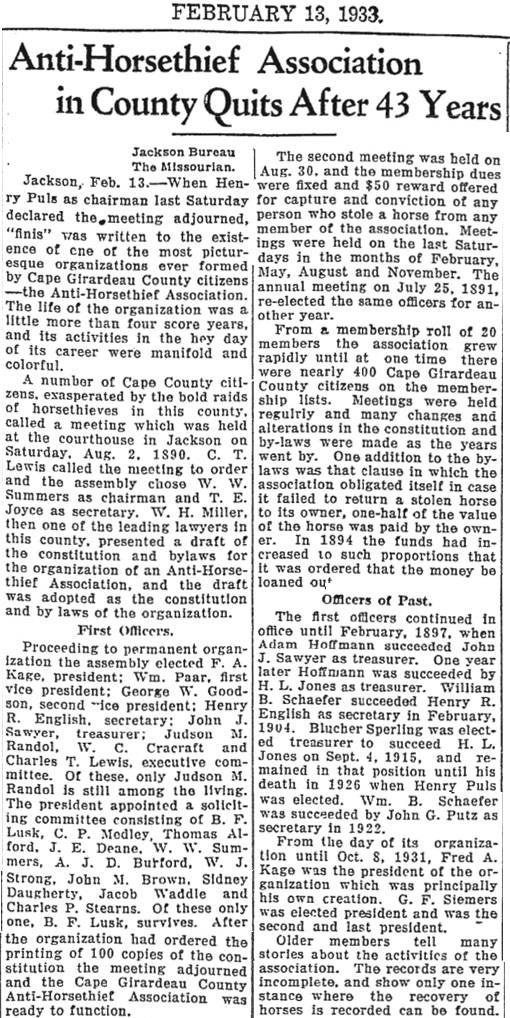 While the minutes for the association are tucked away on the shelves of the Cape Girardeau County Archive Center in Jackson, few tales of the good works of the group have survived. When asked, Drew Blattner from the archives supplied me with a type-written account of a couple of the association's cases.

One involved two horses stolen in 1896 from George L. Snider, a member of the Anti-Horsethief Association. The two Jackson youths who rode off on the animals were pursued by a posse and captured north of Neelys Landing. They were returned to Jackson for trial, but their lawyer, W.H. Miller, succeeded in having the felony charges dismissed. His clients were fined $50 for "unlawfully riding horses away." The two spent some time in jail, as they were unable to pay their fines.

In another incident recounted by F.A. Schneider, his father, William G. Schneider, also a member of the association, discovered two stray horses on his farm near Dutchtown: "Their presence was reported to the association, and Schneider fed the horses all winter and in the spring put them to work. Through the publicity given the occurrence, the owner was located and came from Wayne County after the horses. He wanted to make (William) Schneider pay for the use of the horses, but the association's officers ruled that since Schneider had fed the animals through the winter and charged nothing for that, the owner was not entitled to recover."

The final item about the Anti-Horsethief Association was recorded four years after its demise. Having decided to dissolve the organization, a liquidator was appointed to pay out the money still in the treasury -- some $562 -- to the members in good standing. After this was done, $41 remained in the hands of the treasurer, Henry Puhls. He was advised by a committee made up of C.R. Query, W.F. Schade and J.H. Campbell to divide the funds "between two orphanages, Methodist and Presbyterian, in equal shares."