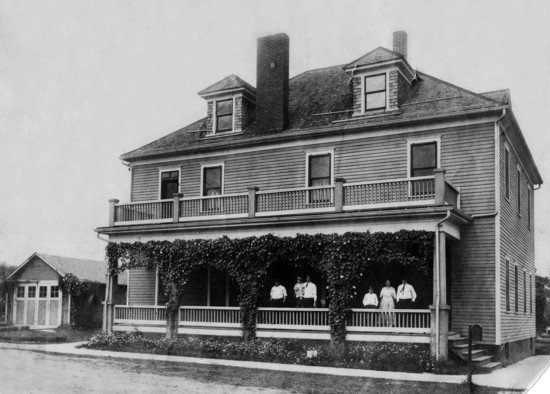 Pictured here is the house at 604 Jefferson Ave., in Cape Girardeau. The structure, just a short walk west of Cauble & Field, is now an apartment house, but back in the early 1900s it was a single-family home that was converted into the Mattie Adams Orphans Home and Industrial School of S.E. Mo.

On Feb. 17, 1905, the 10-room home of the Adams family was destroyed by fire, with only the parlor carpet and piano being saved from the hungry flames. An article printed at the time noted that the house was in Haarig, that German-populated section of Cape Girardeau generally centered around Good Hope and Sprigg streets. It's possible that the house pictured above on Jefferson Avenue was built on the same site, but that's yet to be verified.

Just how the idea of using the house for an orphanage came about isn't clear. Some articles say "two private parties on their own responsibility" established the orphanage. One of those "private parties" was Mattie Adams, while the other remains unknown. It doesn't seem likely that the unidentified benefactor was her husband. I've yet to find any mention of the home for wayward waifs on the pages of Ben Adams' Democrat. Oddly enough, however, an ad for the home did run on Jan. 23 and 24, 1908, in his competition, The Daily Republican.

That ad contains a photo of the house and the following copy:

Maintained by prayer and EFFORT.

Motto: With all thy wisdom, get understanding,

Whene'er I take my walks abroad,
How many poor I see!
What shall I render to my God,
For all His gifts to me?

I do not hesitate to ask for help in this undertaking. The very idea carries its own arguments; its name bears its import.

It is the birthright of every child to have a home, with environments suitable for the development of its citizenship; and it should be considered a privilege, by every patriotic individual, to contribute to the support of such an enterprise.

For speedy relief I open the doors of my own home, with a heart throbbing with motherly love, and a soul burning with zeal, for the interest of suffering humanity.

In casting in my "widow's mite" I only form a nucleus for all other efforts, feeling assured, in the near future, of erecting an institution, modern in all its equipments; filled with an atmosphere of love and sunshine -- God's own nursery, from which shall go forth men and women qualified to meet the responsibilities of life in all its phases. The child is the nation. "We must educate, or we must perish by our own posterity."

Unfortunately, Mattie's dream of a modern institution to house and educate "suffering humanity" never really came to fruition. Mentions of the home are only sporadic in the newspaper during that first year. A note in November 1908 told of 14 older children, residents of the home, who were guests of Herman Bock at the Lyric Theater. At the time, the orphanage housed 21 children.

By April 1909 the newspaper began carrying stories of smallpox, measles, mumps and pneumonia being prevalent among the orphans, prompting the city's health board to place the home under quarantine. Mayor M.E. Leming, acting on behalf of the city, stepped in to aid the orphanage, ordering a dozen boxes of rolled oats, a dozen loaves of bread and a gallon of syrup, as well as a supply of milk, delivered. The outbreak of diseases continued until May 22 and left at least one child, aged 4, dead.

Apparently, Mattie's home operated under the auspices of the board of health into 1910. But the whole experiment came to an abrupt end in August of that year, when Mattie was suddenly taken ill herself with an unknown malady. As a result, the children of the orphanage "were scattered to the four winds." No records have been found of the inhabitants, why they were sent to Mattie or where they went after the home's closure.

In 1911 Mattie and Ben Adams took their leave of Cape Girardeau, settling in Conklin, Calif. Their home at 604 Jefferson was used briefly in 1914 as a shelter for homeless children. However, in 1919 it was sold to Al F. Meystedt, who hired Frank Smith to transform the big structure into a two-flat apartment house.

Ben Adams passed away in June 1924, and Mattie followed in 1942. Her obituary notes, "Up until the last weeks of her life, Mrs. Adams enjoyed such activities as dancing and flying. Her last plane trip was taken three months ago. She also wrote articles for Los Angeles newspapers."

She was survived by a son and three daughters, one of those being "Mrs. Lady May Gilmore, mother of Virginia Gilmore, film actress."

Virginia Gilmore was quite a popular actress for a time, but probably her greatest claim to fame was that she was married to (and divorced from) actor Yul Brynner.