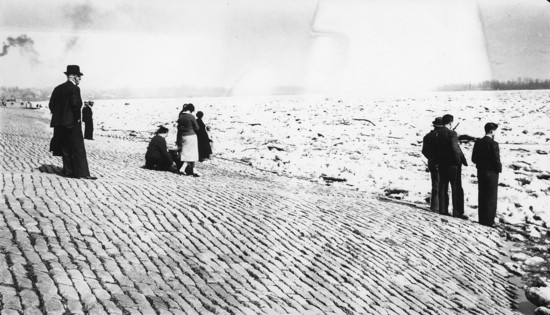 It isn't often these days that Girardeans wander down to the riverfront during winter to see the Mississippi frozen solid, as these folks did in the mid 1930s. It would take a long spell of frigid temperatures and low river stages to produce this type of occurrence today.

But before the advent of ice-breaking, steel-hulled boats, a frozen river could actually benefit Cape Girardeau. During times when coal to heat homes and run factories was short, and before a bridge spanned the Mighty Mississippi, merchants sometimes hauled coal across the smooth ice in horse-drawn wagons or sleighs.

A smoothly-frozen river could also serve as entertainment, with the more daring venturing out onto the ice, walking, skating, riding bicycles and even driving cars to Illinois. This 1924 article delves into Cape's frozen-river history.

The article notes that in 1903 brave souls skated as far north as Neely's Landing and as far south as Commerce on the frozen river.

That reminded me of another ice-skating exploit, not on the river, but on the ice- and sleet-covered roads of Cape Girardeau County. In January 1937, Elmer Eggimann of Gordonville ice skated from his home to Cape Girardeau. The newspaper noted that, while he couldn't skate up Flint Hill, the young man made all the other grades. While in Cape Girardeau, he paid a visit to the Lesem-Millikan garage, where he bought a used car, chucked his skates inside and drove home.

Ice skating has a long tradition in Cape Girardeau. Almost since the lagoon in Capaha Park was dug in the early 1900s, ice skating was a favored winter sport for young and old alike. That continued after the city purchased the park in 1915, although I'm guessing the rules about when skating was allowed on the pond became more strictly enforced. By the 1980s, Parks Department employees had to measure the ice at a thickness of 4 1/2 inches or more before anyone was allowed to skate. A bonfire notified enthusiasts that the ice was safe. According to Missourian files, 1985 was the last year ice skating was allowed there.

The recently-razed Plaza Galleria took the place of the outdoor fun when it opened its doors in the former Kroger Super Store in 1983. The all-year-round, indoor rink continued to operate until 2004, but skating on the Capaha Park Lagoon has not resumed.

One of the oddest ice-skating stories I ran across in researching this blog was an effort in 1963 to add a rink to Arena Park.

An Oct. 19, 1963, Missourian article described its construction: "The rink is located south of the Arena Building and slightly east of the fair midway. It will consist of a clay basin bounded by a concrete lip to contain the water. Application of clay six to 10 inches deep over the 100-by-140-foot surface was constructed Friday. About 100 loads of dirt were used. After a concrete lip is constructed by Crites and Sailer Construction Co., the clay will be leveled to its final surface. Overall supervision of the work is being done by George Penzel, engineer of the Cape Special Road District." 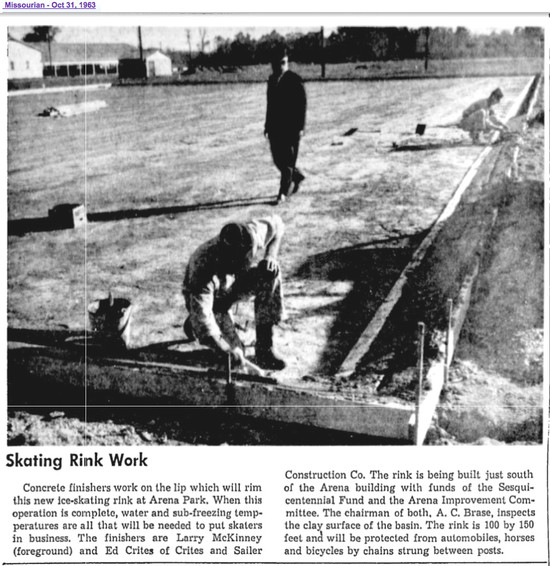 The rink cost between $1,000 and $1,200, the funds coming from money remaining in the Sesquicentennial celebration fund.

By mid December, workers had flooded the four-inch-deep basin, and everyone was anxiously awaiting cold temperatures that would freeze the water. Unfortunately, vandals struck before the first skate could be laced. Would-be skaters arrived at the frozen rink Dec. 16 anticipating a fun-filled day on the ice, only to find it broken into large chunks. Park employees were forced to remove the broken pieces and flood the rink once more.

It's doubtful the Arena Park facility ever became very popular. I was unable to find any photos of skaters using that rink. The last mention of its use was in January 1966.