I'm not much of a football fan, high school or otherwise. But I am a cat person. This front page story in the Southeast Missourian from 1938 caught my eye, and I decided to feature it in a blog as we close out the gridiron season.

I've retyped the story, as the reproduction from microfilm was just too difficult to read. I apologize for the poor quality of the photograph. It's the best I could do from the scratched microfilm. 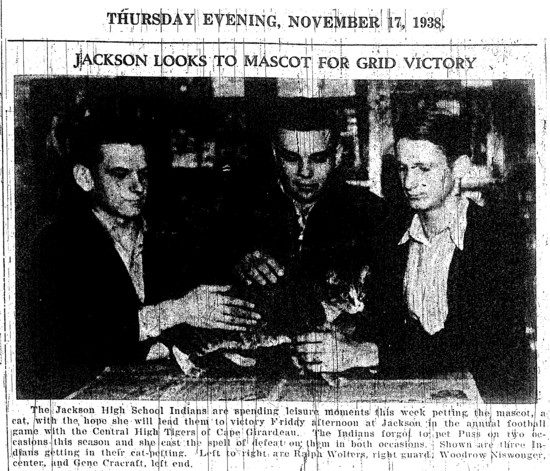 With the annual high school football classic between the Cape Central Tigers and the Jackson Indians, to be played at Jackson, less than 24 hours away, members of the Jackson team are placing faith in their mascot -- an ordinary house cat -- to bring them victory. Jackson has lost two games this season, but it wasn't the mascot's fault.

For four years the Indians before each game, with exceptions, have been to a man, trekking to Sam Peterman's confectionery to pet a grayish brown cat Peterman had proffered as the team's mascot. In those four years the Indians have set up an enviable record, 30 victories, two tie games, and only four losses. This year, it was explained, the Indians forgot to pet the cat before the Chaffee and Charleston games and, whether or not Puss felt slighted and cast her spell over the team, it remains that both games resulted in defeats for Jackson.

This week the team is trying to make up to the cat. Every day Puss gets a thorough petting -- as one Indian put it, "We're really rubbing the fur off that cat this week."

To most everyone on the team she's just an ordinary cat. Peterson said the cat is about five years old. There's nothing spectacular about her. To the casual customer at Sam's place, she's just another gray cat, with a tinge of yellow and white about her feet, but for a cat, has a rather intelligent face.

The cat knows all members of the team and submits readily to being petted, although the going gets rather rough at times when all the footballers gather around. Let a stranger try and pet her and she immediately dashes away, disappearing through a hole in the floor near the wall to the safety of the basement.

The Missourian's photographer found three of the Indians going through the petting process on the cat the other night and when the bright flare of a photoflash exploded the fur stood up all over her in her huff as she gave the cameraman a dirty look and could almost have said -- "Trying to put the jinx on me, eh? Well, I'll show you, you Capeite."

And show him she did!

The next afternoon, the Indians defeated the Tigers 6-0.

The Jackson High School Indians of 1938 will go down in history as the first one to accomplish a feat that no other Jackson eleven has been able to do in 10 years -- defeat their ancient rivals, the Central High Tigers of Cape Girardeau. Rising to the heights, they did it Friday afternoon by a score of 6 to 0 on a muddy Jackson field before a crowd of nearly 2,000 persons.

The last time a county seat team was able to defeat Central was in the last of a two-game series in 1928, and by the same score as yesterday. This was the Indians' sixth victory against two reverses and the Bengals' second defeat in eight contests, during the season, now over for both schools.

The Indians not only defeated the Tigers, but accomplished another feat that no other opponent has done this year, that of holding Coach Lou Muegge's eleven scoreless. To accomplish this Jackson had to put up a stonewall defense in the third quarter.

The victory was a real climax for 10 members of the Jackson Indians, Milton Nothdurft, Douglas Sneathen, Hines and Ralph Wolters, Paul Mueller, Denzil Bollinger, Harry Penrod, J.E. Hagans, Harold Kasten and Jean Cracraft, all of whom had a hand in the Tigers' defeat, with the exception of Mueller and Kasten. To Sneathen most of the glory went for it was his score which gave the Indians the victory.

The touchdown came on the second play of the second quarter when Sneathen, the Indian fullback, went over from the one-yard stripe after the Braves had opened up a 34-yard drive in the latter part of the initial quarter. The Indians were aided in their touchdown by the opening kickoff which went only about 16 yards, a poor punt, and two penalties against Central, one for 15 yards and the other for an offside. Halfback Ben Roberts was banished during the uprising, officials claiming he struck at a Jackson player and Roberts claiming they piled on him unnecessarily.

The Tigers had two opportunities to score. At the beginning of the third quarter they opened up a drive from midfield and in straight line plays and on two shovel passes, the latter from Charles Brune to Milford Foxx, carried the ball to the Indians' goal line only to lose the oval on downs one inch short of the marker.

In the closing minutes of the game, Vincent Rueseler, Tiger fullback, recovered an Indian lateral on Jackson's 31, but Jackson could advance the ball no further... (Excerpt from Nov. 19, 1938, edition.)

Curiously enough, the sports reporter made no mention of the cat's contribution to Jackson's victory.