On May 1, 1907, The Daily Republican -- the Missourian's original name -- published an "Industrial Supplement." Imagine a turn-of-the-last-century "Progress Edition."

Since the supplement is hard to find, I thought you might enjoy reading the articles and seeing the photographs and drawings it contains. Because the publication is around a dozen pages long, I'll split it up and run the contents in several blogs.

In compiling this special edition, The Daily Republican has endeavored to show the progress made in Cape Girardeau during the past year instead of merely telling what has been accomplished. Pictures tell the story better than words, and for this reason but little explanation is given. Considering what is shown to have actually been accomplished, it is safe to state that Cape Girardeau has advanced more rapidly and substantially in proportion to its size than any other town in Missouri, and it is also shown that the coming year will bring more progress than any preceding one. Cape Girardeau is enjoying a prosperity that is sure to increase from year to year and that it will in the course of a very few years be a city of great importance, especially in the manufacturing and educational lines, cannot be questioned. 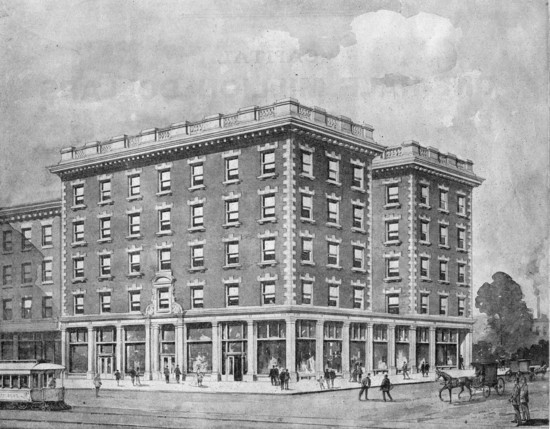 The Himmelberger-Harrison Building, which is shown above, is the first modern office building for Southeast Missouri, and when completed will be the finest structure between St. Louis and Memphis.

It has a frontage on Broadway of 100 feet and on Fountain Street of 104 feet. It has five stories and basement and will contain over 100 rooms.

The building is of stone, concrete, iron and glass, the only wood being the doors, window frames and baseboards. It is so near fireproof that no insurance will be carried on it, and the tenants will receive the same benefits.

The west side of the first floor will be used by the Southeast Missouri Trust Company. This section will be finished in marble, mahogany and brass, and will be as fine as any banking house in Missouri. The east side, along Fountain Street, will be occupied by a modern department store, which will cater to the business of all the people.

The other floors will be divided into offices, single and en suite, and owing to the modern construction, every room will have an abundance of light and ventilation. On the top floor will be a large lodge room, with adjoining cloak rooms, anti-rooms, etc.

The halls will be very wide and light and electric elevators will be in continuous operation.

The building will be lighted by electricity, every room will be equipped with lavatory, hot and cold water, and connections for fuel gas and telephone. Large toilet rooms will be on each floor and every convenience of a modern building will be provided.

The building is of re-enforced concrete construction. The exterior finish is of Cape Girardeau stone up to the second floor and then the walls are faced with vitrified bricks.

This building, which is the pride of all Southeast Missouri, will be ready for occupancy by the first of September. 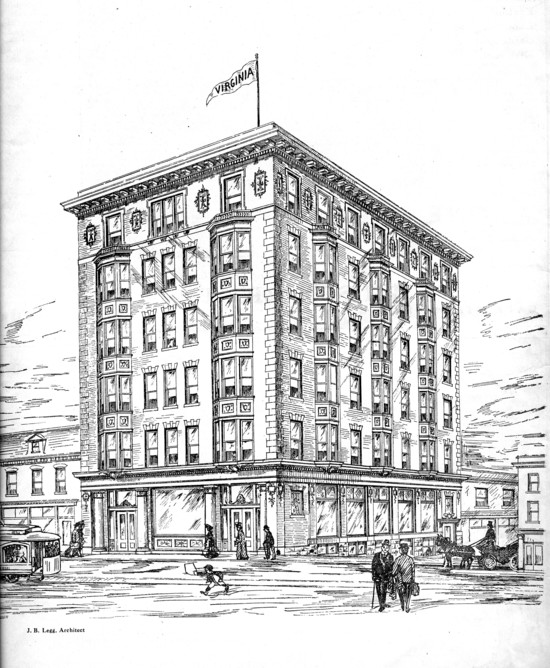 The Virginia, to be erected soon, will be a most elaborate  6-story hotel.

To be erected by the Virginia Hotel Company of Cape Girardeau at an early date. The Virginia will be a strictly fireproof building, six stories high, containing 100 rooms, reception rooms, parlors, etc. The sixth floor will contain the dining room, which will be one of the finest in Missouri. Every other room will have a bay window and private bath and all rooms will face the street. This hotel will contain every modern convenience and will be located conveniently for railroad and river travel. The Virginia will be a fitting monument to Cape Girardeau hospitality.

Standard Basket & Veneer factory biggest of the kind in the world.

The main building is 226 by 76 feet; the "L" is 112 by 50 feet; three stories high, giving a total of 68.328 square feet of floor space. The boiler room is 50 by 30 feet and is located on the far side of the building. The second floor is used for all the heavy machines, including the veneer machines, clippers, saw mill, and veneer dryer.

The saw mill, with all the rip, cross-cut and bolting saws, are used to cut box heading. The big dryer is used to dry the veneer. It covers a floor space 115 by 18 feet. It contains three miles of 1-inch steam pipe and has a capacity of drying a car of egg cases per day, or 16,000 pieces.

The top floor is used for the manufacture of butter dishes, in both oval and wire-end styles, in all sizes, having a capacity of 300,000 per day. These are conveyed from the third floor by means of belts to the top of the gravity butter dish dryer, and in thirty minutes they are dry; they are then conveyed to the basement, where they are packed for shipping.

The basement, or first floor, is used for the engine, machine shop, blacksmith shop, knife grinder, air compressor, and reservoir, and is used also for the storing of stock.

The big derrick shown in front of the building has a swing of 115 feet, being capable of lifting the logs off the cars and placing them in the storage yard, piling them 20 feet high or placing them on the drag-saw carriage, where they are cross cut into the required lengths for the veneer machines. This is operated by compressed air. 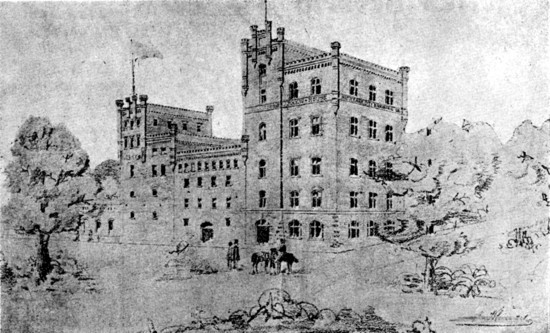 The proposed new Cape Brewery and Ice plant soon to be erected.

The recent sale of the Cape Brewery and Ice Company to Mr. Max Koeck and associates will bring to this city one of the largest breweries in the state. Plans are being made for an immense brewery, which will be as modern as science and money can make it. When Mr. Koeck bought the brewery, he had arranged to enlarge it considerably, but the territory to be supplied offered such inducements that an entirely new plant has been decided upon. It will be located on the present site and will be largest brewery in Missouri outside of St. Louis and Kansas City.