Freedom Corner a reminder of the price of liberty 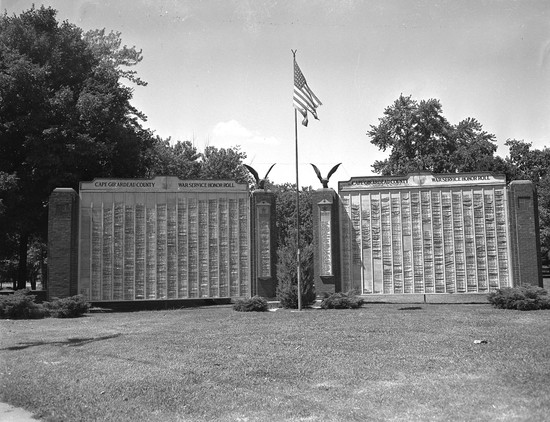 For days now, knowing this blog would appear on Independence Day, I've struggled with what I would write that could possibly lure people away from their grills, picnics and fireworks. My writing skills can't do justice to the greatness of the day.

So, I'm taking the easy way out and leaning heavily on history. In this case, the history of Freedom Corner.

Capaha Park, and specifically the northwest corner of Broadway and West End Boulevard, has been a patriotic gathering place for generations. The property has been city owned since 1915, when it acquired the fairgrounds.

The first structures at the corner were a pair of billboards, supported by four brick pillars, erected during World War II. The boards contained the names of every  man and woman from Cape Girardeau County in military service. At the time the service boards were dedicated in the summer of 1942, they held 1,295 names. By November 1944, that number had grown to over 3,700; 60 of the names had gold stars, symbolizing their deaths in service.

Two eagles were added to the inner pillars in February 1943, a gift of the Eagle Packet Co. of St. Louis to the Louis K. Juden American Legion Post. Before they took up residence here, the eagles had adorned the ballroom of the steamer Bald Eagle.

The service boards remained in place until after the war. When they were removed, the pillars were left standing.

In 1948, the American Legion approved a plan to place plaques with the names of the county's war dead from both world wars on the pillars. Those plaques were dedicated on Memorial Day, 1950. That same year, a replica of the Statue of Liberty was erected on the site through the generosity of the Boy Scouts. Rush H. Limbaugh Sr. spoke on the occasion of its dedication and gave the spot its name: Freedom Corner. 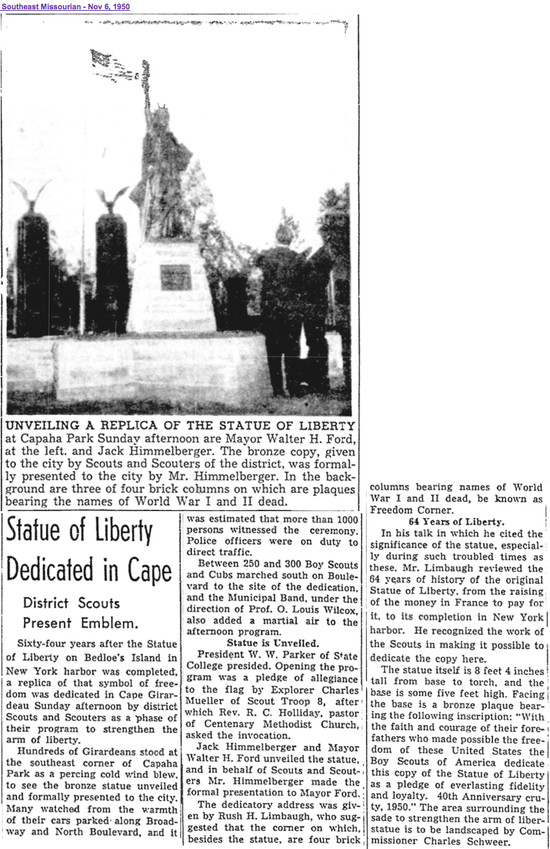 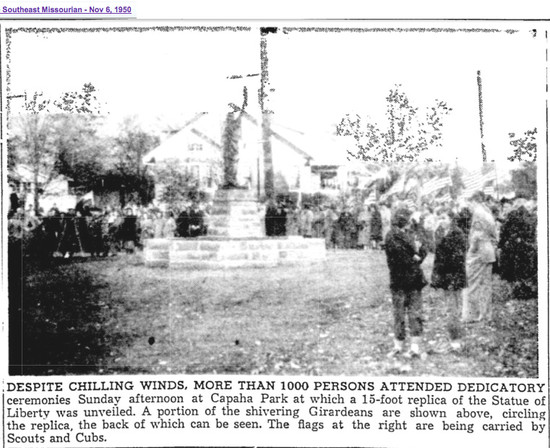 Freedom Corner has been renovated several times over the years. The pillars have been rebuilt, the eagle statues replaced and memorial granite stones added. The corner now displays the names of over 200 men and women who fought and died in World Wars I and II, Korea, Vietnam, Iraq and Afghanistan.

If you're traveling by the corner of Broadway and West End today, why not take a moment to stop there and remember the price of freedom?