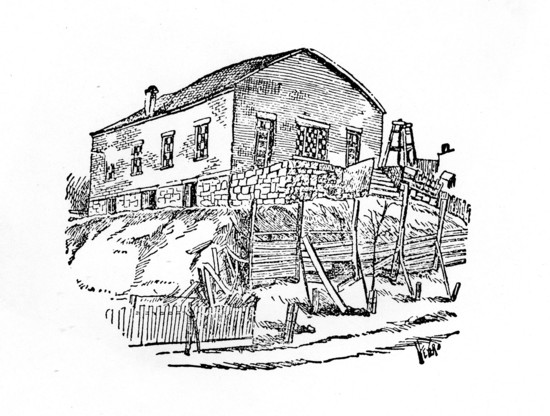 While Cape Girardeau's earliest religious roots were planted in the Catholic Church, the distinction of having built the first house of worship in our river town goes to Baptists.

From the 1965 booklet, "History of the First Baptist Church, Cape Girardeau, Missouri," we learn that a congregation was organized here on Aug. 13, 1834, with nine members. Although not all the names of the members were known, the booklet lists those who were: John Juden Sr., John Juden Jr., Abbie Block Juden, Capt. William Surrell, Ann Juden Surrell, and the Rev. and Mrs. Thomas P. Green.

The booklet goes on to say that, in its earliest days, the small congregation met in Old Lorimier School. However, the school wasn't constructed until the 1870s. Where the Baptists initially met is a mystery, but it didn't take long for them to build a church. On May 21, 1838, a lot was purchased for $100 from Ervin McFerron, Thomas W. Anderson and Simeon English on the west side of Lorimier Street, between Broadway and Independence, high on an embankment. Cost of construction of the little brick church was about $3,000, mostly for building materials. It is thought that much of the construction labor was donated.

An amusing story, written by Mrs. J.C. Maple, was reprinted in the 1965 history booklet. It was first published in The Daily Republican in 1908, and tells the story of the "big scare" that initiated the use of the edifice:

This sketch of the early history of the church must be largely reminiscent; made up from the recollections of a child, and of what was told her, and of occurrences that I remember. The church records (having) been lost, I may be able to review some things that will prove of interest to the present membership.

Rev. R.S. Duncan, in his history of Missouri Baptists gives the date of the organization Aug. 13, 1834, with nine members...

The church must have taken steps very promptly to secure a house of worship, and the brick building on Lorimier Street was erected. It was the first and for a long time the only Protestant house of worship in the city.

An occurrence, connected with the first service held in this house, served for a long time to fix dates of events, by the habitual saying "these things occurred before or after the floor of the church gave way." The late Mrs. Louisa Rodney, who had a remarkable memory for dates, told me it was in 1839. Mrs. Mary LaPierre connecting the time with some items of family history corroborates that date. If they are correct, I was only 2 1/2 years old, yet some of the events were indelibly fixed in my mind.

The Cape Girardeau (Baptist) Association was to hold its annual session (at) the church, and the workmen were very much hurried to get the house in condition to be used. Situated on a hill that sloped to the south, it was very easy, and inexpensive to arrange for a basement room half way under the building. The floor above was to be supported by substantial pillars, there was not time to finish the basement and temporary supporters were arranged. A stump, that had not been removed, served as a base for one of these improvised pillars. My impression of the day is that it was most bright and beautiful and the house was crowded to its utmost capacity. The people were all dressed in their very best attire. The pews were not in, but temporary seats had been made of planks.

I remember very distinctly sitting by my mother, and looking at the Rev. Mr. Edwards who was preaching the introductory sermon, when suddenly the floor seemed to sway under me, and when I looked up I saw the red-top boots of my brother — the late C.G. Juden — go out of the window south of the pulpit. Then my father said to my mother, "Sit here until I come back," and took me in his arms and placed me upon the lap of Uncle Thomas Juden who was sitting on the pulpit steps. From this safe haven I looked with bewilderment upon a panic, such as is seldom witnessed.

The first law of nature seemed to have asserted itself, for every one was trying to escape from the building regardless of everything and everybody else. Clothing was torn, slippers lost, bonnets crushed, jewelry torn away and broken; while many bruises and hurts were inflicted by the merciless crowd. It is strange, but true, that no one was seriously injured.

After almost every one had left the building, my father, after getting my mother out unhurt, came for me. Uncle Thomas told him that I had been a good girl and did not cry. This praise was very pleasant to me, but I think it was not goodness, but the sight of that screaming, struggling mass of humanity so bewildered me that I forgot to cry.

Investigation showed that the prop placed on the stump had acted as a wedge, and so split (the stump) that the floor had sagged only a little way, but enough to produce the fright of the entire audience. The damage to the floor was easily repaired, and the length of time the building had stood, and the many, many times it has been filled with attentive worshipers prove how substantially it was built...

The Lorimier Street church served the congregation about 55 years. Church records dated Jan. 4, 1893, show that member Maple Wilson made a motion that the trustees sell the building and grounds to Louis Houck for $1,000. The congregation reserved the right to use the church for another two years, rent-free, if needed. The sale was not to include the fixtures of the church. The sale was made. In addition, the Recorder of Deeds office at Jackson on Jan. 16, 1893, shows the purchase of the lot at the intersection of Spanish Street and Broadway by the church for $1,000. The ground was purchased from Henry J. Brune.

It was at that site that a new First Baptist Church was constructed.

But what happened to the original building? Houck used it for his business office for a number of years, but by 1919 it was vacant. 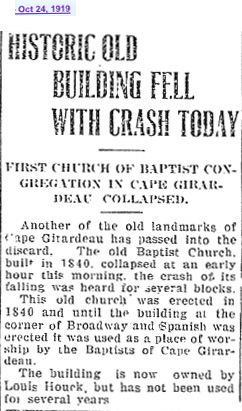 There's little evidence left of the first house of worship built in Cape Girardeau. A marker on the retaining wall near the double staircases that lead to the site is all that gives evidence of this piece of Cape Girardeau's past.